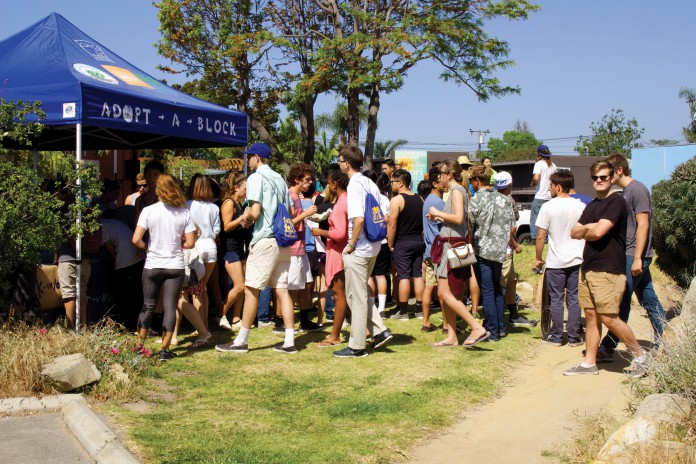 Every year, Isla Vista’s well-known Deltopia event draws thousands of people from out of town, who flock into the already packed neighborhood in hopes of having a good time. Parties and memories (good or bad) are made over the course of 48 hours. Unfortunately, by the time Sunday morning arrives, those jogging around the streets at the wee early hours of sunlight will find the entire area filled with trash. That’s okay, there’s a trash cleanup right? Not here. Instead, it is up to the citizens of IV and University of California, Santa Barbara students to pick up after ourselves and keep our home of four years clean.

The Deltopia clean up event is hosted by the Isla Vista Recreation and Parks organization. Founded in 1996, their priority is to safeguard the residents of IV and try to keep the place as safe and clean as possible. Around 360 volunteers gathered to help out starting at 11 AM on Sunday, April 5, by the Isla Vista Food Co-Operative. Participants register at the front desk and form a line to pick up the supplies they will be using for the next three hours, where they are then split up into small teams to venture out scavenging trash.

The man in charge is Adam Porté, supervisor and the lead director for the past two and a half years. This is his third Deltopia cleanup since joining the department, and he has loved every moment of them.

“The first and second time we did not expect there to be as much trash as there were, so we were very undermanned,” said Porté. “We only had around fifty people my first year.” Much of this can be attributed to scale of insanity that goes on during each respective Deltopia.

“In comparison, this year is much cleaner than the last,” he said. He continued that effectively advertising really helps recruit more people, better preparing them for future turnouts.

In addition, organizations such as Save the Mermaids reminded revelers on Del Playa to pick up after ourselves with signs and words of encouragement during the festivities, even passing out pocket trashcans for cigarette butts.

After the work began, the streets of IV were filled with students helping out, and as it turns out, there was a wide variety of participants. Second-year biology major Marisa Allan, a resident advisor for one of the UCSB residence halls, said she “wanted to expose students to helping the community while having the event serve as a bonding experience.”

Fraternities and sororities certainly did their fair share as well. Alpha Phi Omega’s Shawn Wu, a first-year actuarial science major, joined as part of a large group of APO volunteers. “This is what our fraternity is all about, we joined because we wanted to go out and help better the community in as many ways as we can,” said Wu.

Judging by the numerous shirts and sweaters, it was evident that Greek life was one of the fundamental components of the community’s well being that Sunday morning. “It feels good just to be out here and knowing that we’re helping out,” said Sigma Lambda Gamma member Lupita Perez, a fourth-year sociology and feminist studies double major.

Everyone enjoys a good party, but it is important to always consider the state of the environment we live in. IV holds a special place in most of our hearts, and we hope to keep it in great shape to continue its own tradition of excellence. Deltopia clean up will continue to be an event for years to come, and community members, organizations, Greek life, and students are the engine that run it.

“(IV is) my home, my baby,” said Porté. “I take a lot of pride in where I live because this place represents a part of who I am. It’s great to see that there are other people who share the same feelings I do, this is what motivates me to continue doing what I do.”