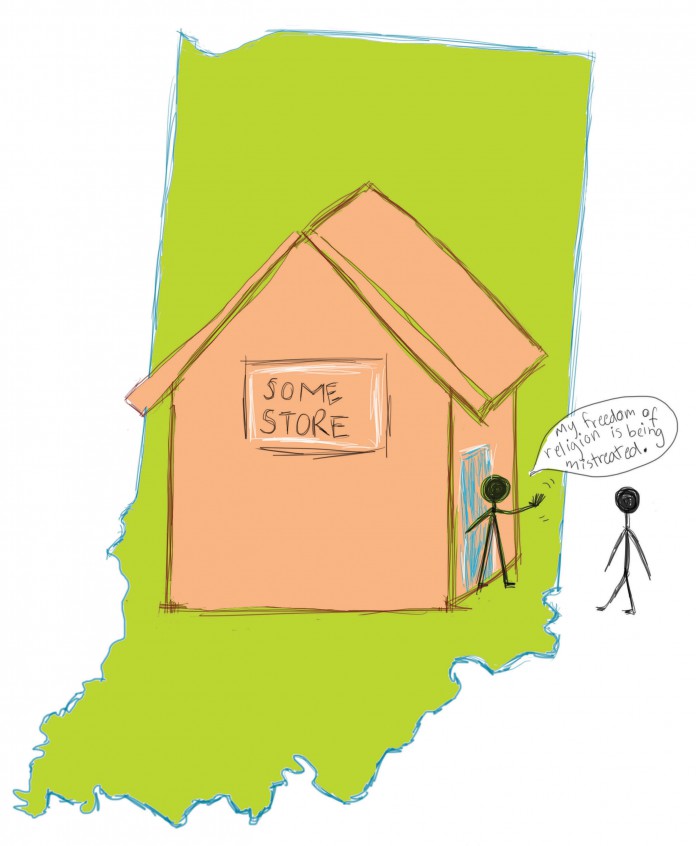 During the past week, the United States has seen nothing short of a debacle result from the recent institution of the Religious Freedom Restoration Act in the state of Indiana. The law was enacted to prevent the government from burdening the right of people or businesses to behave in the spirit of their religious beliefs. The reaction to the signing of this act was swift and uproarious, as dozens of famous names and famous corporations joined with thousands of people to oppose the law. Most felt that the law could result in businesses implementing discriminatory practices against people of other religions or members of the LGBT community. The outpour of anger, along with the threats of boycott by many, has been enough for lawmakers to amend the act by placing an addition that businesses cannot decline services to customers based on prejudice. The whole event should officially feel like an open-and-shut case for the American public to now celebrate. Or at least that would be the case, had similar laws not already been put into effect in 19 other states before the outrage against Indiana began.

The outpour of vitriol towards Indiana raises a necessary question: why Indiana, and nowhere else? Michigan enacted a similar religious freedom act just last year, and there was no collective backlash from the world then, although it had the means to react in 2014 just as it reacted towards Indiana last week. One answer may be that the wave of national attention ebbs and flows, and picks up things only at certain times. But one must consider the many companies (notably the NCAA) that began to boycott the state of Indiana in the past week. It doesn’t seem fair that one state should be so significantly opposed when other states, like Michigan, didn’t get nearly the same amount of venom. Why, when 19 other states already had potentially discriminatory legislation in place, should the Hoosier State get the short end of the stick?

Unfortunately, a great tradition of backlash answers the question. Outrage tends to require a scapegoat to be the primary—and often only—target of anger. Indiana was the scapegoat for a widespread issue. The genesis of the scapegoat phenomenon is the need for anger to be directed towards a “fixable” problem. The Indiana issue was simple to take on—cast Indiana out as a problematic state, watch it be forced to change under pressure, and congratulate each other on standing down intolerance in the United States. When 19 entire states have an issue, it’s much less convenient of an issue to tackle. Would businesses and celebrities really be able to take on the burden of boycotting 40 percent of American states? Likely not, and so it’s convenient to jump on one state as though it’s the only problem child. After all, it’s easy to hate a singular bad apple instead of acknowledging an entire tree of rotten fruit.

Everyone wants to be labeled as a progressive in the current day and age. It’s trendy to appear culturally aware and accordingly sensitive. Each time a big corporation handed down a blow by boycotting Indiana last week, we applauded as though this were a boxing match. In reality, it was a lynching—Indiana took the heat for a problem that had already infected much of the country. That is, the problem of appeasing those religious folk who wish for their intolerant beliefs to protect them from having to treat others respectfully. It’s a disgusting claim to a double standard, but apparently companies, celebrities and the public have decided that persecuting one state takes less effort than having to persecute 19 of them. That we only boycott when convenient, is an issue that rests largely on the backs of American voters, an elephant in the room that would take too much responsibility to acknowledge. While we can congratulate ourselves for having struck down some intolerant people who wish to have denied services to those of different sexual orientation, or Jews, or Muslims, or atheists, we’ve instead proven once again that reactions come when the enemy is spoon-fed, and when the cost of a reaction is easy to swallow.