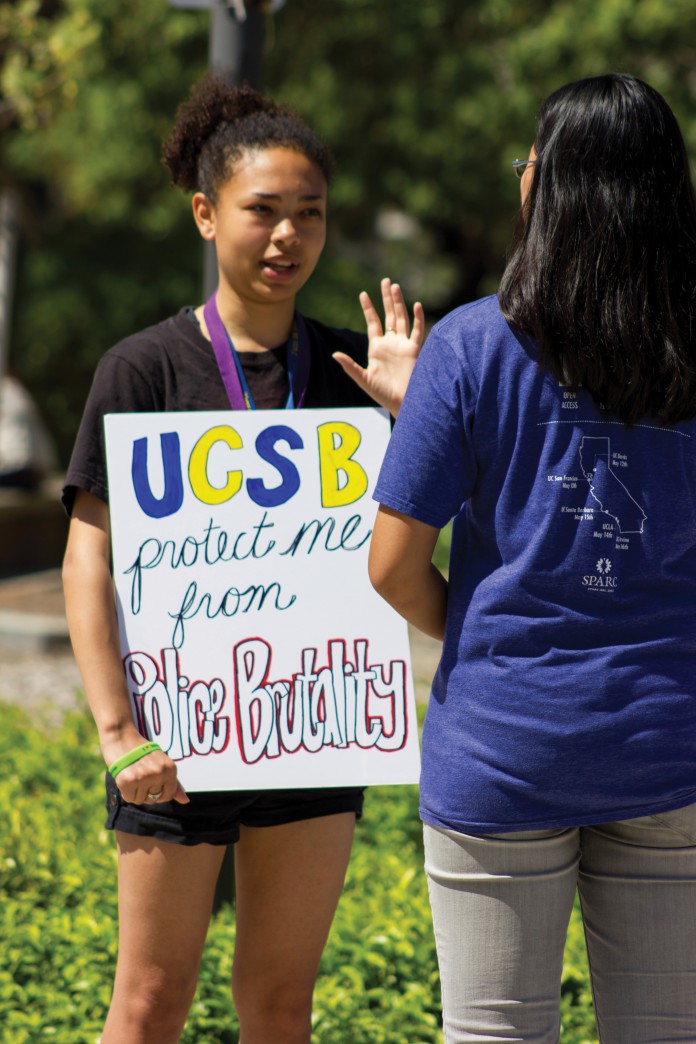 A group of University of California, Santa Barbara students from the UCSB Task Force Against Police Brutality staged a silent protest on April 1,  on the on-campus walkway leading to the Arbor. Protestors spread out across the walkway holding signs that bore messages such as, “UCSB: Protect Me From Police Brutality,” “Stop over-policing in IV,” and “Students are not Profit Polls.”

The purpose of the event was to protest the deployment of more than 300 police officers during the weekend of Deltopia, in response to the riots and high turnout of non-UCSB students that characterized the festivities of the year prior. Deltopia 2014 resulted in excessive property damage, as well as the use of rubber bullets and tear gas by police against the rioters. In the spirit of the silent protest, some protesters wore black duct tape over their mouth with the word “Divest” written across it, representing the Task Force’s demand for UCSB to stop funding militarized police. The tape represented Students for Justice in Palestine’s demands for divestment from corporations directly profiting from human rights violations in Israel and Palestine as well.

The UCSB Task Force Against Police Brutality also released a document titled “Stop Over-Policing in Isla Vista Statement,” explaining their demands and grievances with the Isla Vista Foot Patrol, UCPD, California Highway Patrol, and Santa Barbara County Sheriff’s Department. The document is critical of SBCSD’s “Keep it Safe Isla Vista” campaign, stating, “This platform proclaims to operate as a community effort to maintain order and safety throughout the streets of Isla Vista. Instead, this campaign boastingly intimidates students with memes regarding the increase of profitable restrictions and police presence. They have been using humiliation and scare tactics, spreading photos of real students in serious health conditions as a deterrent to participating in Deltopia.”

The statement goes on to list the Task Force’s demands to Chancellor Yang as well all law enforcement operating in Isla Vista including “the demilitarization of police at major events such as Halloween and Deltopia,” “remov[ing] the profitable financial motives behind excessive ticketing of Isla Vista residents and UCSB students by redirecting funds from tickets into restorative programs and educational safety courses,” that camera footage from police officers’ body cameras “be made readily available to the public within 2 weeks,” and that “all law enforcement officers participate in a required cultural competency and diversity training.”

Both the protest and the document were in part inspired by the UCSB-sponsored Ferguson Alternative Spring Break, where over 30 student leaders travelled to Ferguson, Mo. to learn “anti-policing models and tactics,” according to the statement. However, the Task Force believes UCSB is showing hypocrisy by sponsoring a trip to Ferguson while taking no action to curb their own over policing.

“We’re trying to show that there’s been so much attention on Ferguson, and the school’s supporting us to go do work in Ferguson, as a way to detract from the issues that are here in our own community,” said protester and fourth-year English major Julia Olson. “We need to not just hide behind Ferguson as a problem place, and show that this is a widespread and pervasive issue.”

Jamelia Harris, a third-year sociology and black studies double major and one of the students who took part in the trip to Ferguson, emphasized the pervasive nature of militarized police and racial profiling.

“The parallels of faultiness between both Ferguson and Isla Vista’s relationship with systems of policing that use intimidation tactics to ‘serve and protect’ are a reflection of a systemic problem that affects communities across the United States,” said Harris. “Ferguson is everywhere; Isla Vista and UCSB are not exempt from militarized policing and racial profiling.”

Additionally, Harris said, “When we told the people in Ferguson that they had hired this many police officers, they immediately started to make fun of our university and call us the University with Over Policing, because they said that was shit that’s not even happening in Ferguson, it’s just so excessive.”

“A lot of students of color have expressed that they feel targeted by IV Foot Patrol,” said Harris.  “[They] recognized they were disproportionately fined for quality of life citations—like biking on the wrong side of the road or skating through the walkway to the Arbor—that white people were committing at the same rate.”