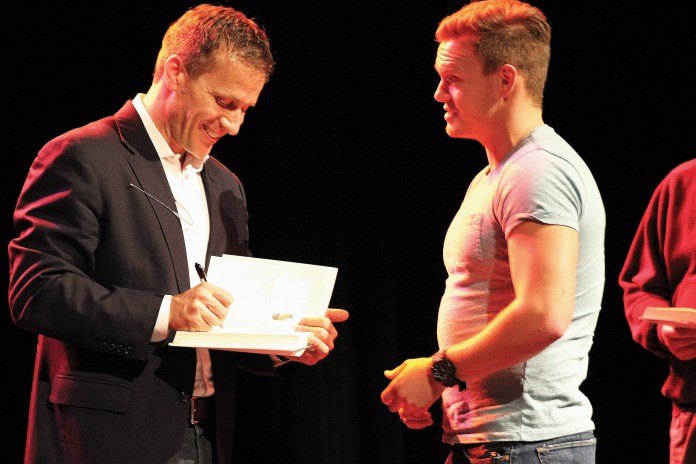 On the night of Thursday, April 2, United States Navy SEAL, Oxford graduate, and non-profit founder Eric Greitens came to the University of California, Santa Barbara with the intention of solving the most important questions humans face in being alive: what is my purpose and how will I get there?

Presented by Arts & Lectures, his guest lecture at Campbell Hall, “Resilience: Hard Won Wisdom for Living a Better Life,” consisted of various anecdotes drawn from his book by the same name. Both center on his interaction with a fellow Navy SEAL, Zach Walker, who had gone through tremendous grief and was struggling to adapt to life back in the United States with post-traumatic stress disorder. Veterans returning to their homeland were often disabled and incapable of returning to their military units, feeling they no longer had something to dedicate their lives to.

Acknowledging this issue, Greitens began his non-profit organization “The Mission Continues” with the intention of helping veterans find a new sense of purpose through volunteer work, and he spoke about his philosophy to those in attendance at Campbell Hall. He discussed how combat impacts veterans psychologically, often leaving them insecure and looking inward to conquer their demons, and noted that the ways in which societies interacts with them only justify behaviors which do not contribute to their well-being.

Referring to Zach’s specific predicament, Greitens said, “He had a lot of really well-intentioned people who were going up to him and saying ‘You worry too much. Hey, don’t worry.’” But Greitens said this was “terrible advice because you’re still going to worry, but now you’re worried about the fact that you’re worried,” which resulted in sympathetic laughs around the room.

Greitens believes that immense grief does change a person. However, he also states that it is possible to move through it and during his lecture gave several ways to overcome trauma.

“You are not responsible for everything that happens to you, but you are responsible for how you react,” the Oxford graduate said to his sizable audience. He informed his listeners that dealing with trauma becomes easier when a person is prepared and suggested a Stoic meditation technique called the “premeditation of evils.” This practice intends to prepare for extreme circumstances by mentally simulating a person’s potential reactions and considering what he is responsible for in any given scenario.

Greitens drew this philosophical perspective through his own training with the SEAL teams in what is called “mental rehearsal.” He stated that in a military drill one, would have to do a 50 meter underwater swim, and that often the feeling of anxiety from being unable to reach the surface would cause a person great distress, so mentally preparing for what could physically come next would be critical to remaining calm. This perspective is something he chose to apply to the rest of his life, and he coached Zach to do the same. The non-profit owner suggested this practice of preparing for stressful situations to successfully manage one’s hardships.

The audience greeted him well at UCSB, as after his main speech, his Q&A (with questions gathered from spectators on index cards) went on for over half an hour. Several people gathered around him after his lecture hoping to get a word with him, and many took photos with the founder of “The Mission Continues,” as he stayed even later to sign copies of his book, which many members of the audience purchased.

“If I asked you to put together jigsaw puzzle pieces, I’m guessing you would ask for a picture. You would want to know how all the pieces would come together, you would want to know what you’re trying to make,” Greitens stated. However, as he believes, “Life only hands you pieces. You have to figure out how to put them together.”