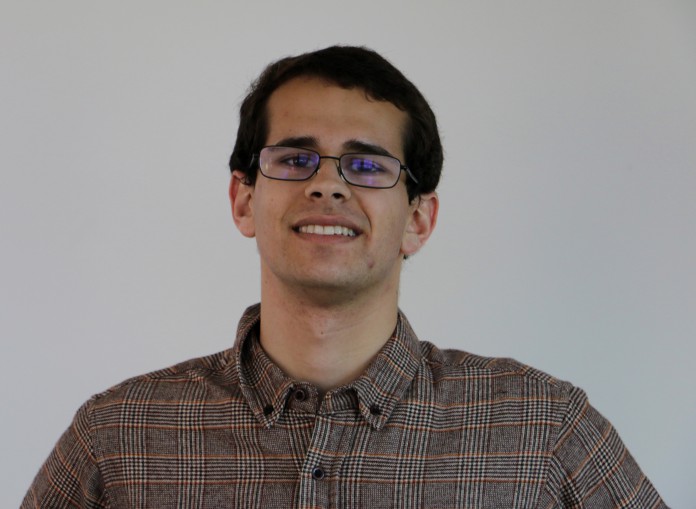 I want to be AS president because students deserve a choice, because the current administration, I believe, does not represent the wants, needs of the UCSB community, because over the past years I’ve watched the situation in Isla Vista grow worse. I have felt like there was not a single voice for civil liberties on the AS executive board or the AS senate, and that is why I am running for president. Because on Dec. 3 they passed a resolution condemning the militarization of the police in Ferguson, a resolution to stand in solidarity with Ferguson, which said, I quote directly, “The tactics of militarized forces contradict their duty to serve and protect.” The AS executive board could stand in solidarity with Ferguson, but they could not stand in solidarity with our community when two SWAT bearcats with riot control gear were rolling into our town. I think this is a shameful lapse of integrity and a lapse of leadership, and as AS president I will fix that.

Student apathy is something I am very concerned about, especially considering that in the last election only 37 percent of students voted, and this isn’t some national election where you have to wait in the polls for an hour. This is a student election where you have to go on GOLD for five minutes and check a few boxes, and apparently last year the candidates were so uninspiring that 63 percent of the students couldn’t even bother to do that. So I think that shows that Associated Students is not in touch with the people that it should be in touch with. I think that one of the problems with the current administration is that they do not have enough contact with the voters in the public, and that is something I want to rectify. I want to hold events where people in the community can get to know their representative and where people can come together and talk about these issues and know that they are being heard by the person that is representing them. Because I think that a lot of people in AS spend all four years there, they learn how to be bureaucrats, they learn how to be politicians, they don’t learn how to represent the students. So I am coming at this with a completely new perspective, and I think that I will be a much better representative than the people who are currently in charge. Also, I don’t necessarily know if student apathy is 100 percent a bad thing because not everyone wants to get involved in politics, and that’s okay, you know? Some people just aren’t political creatures, and it’s them who I am trying to protect. If someone wants to go out and do their own thing in life, whatever that is, whatever they want to do—that’s great. And if they want something to do with politics, that’s great. And I believe those people should vote for me because I am the rare political figure who will protect their rights to do that, to do whatever they want with their own life, so long as it’s not hurting anyone else.

I think one of the things we need to do with this is hold our politicians accountable. In September or October of 2012, I came here as a freshman and I joined the Campus Democrats, and we all fought very hard to pass Proposition 30, which we were told would raise taxes across the state to fund the UCs. I thought that was a great idea at the time, and so I fought hard to pass it, and the proposition was supposed to fund the UCs until 2016. But two years later in the fall of 2014, the state government was telling us once again that they were going to raise tuition, so I feel like we are betrayed and I feel lied to and I think it’s a shame that the students have already forgotten what they were promised when they fought so hard to pass Proposition 30. A tax increase is never desirable, but its effects can be desirable, and I think we were misled about the effects of Proposition 30 so I will hold our politicians accountable. I believe in transparency of the budget, not just for this association but for the entire UC system, and so when I get up there and I start working with the UC presidents I’ll get all of them to come together and encourage Napolitano and demand that she makes her UC budget completely transparent and completely accountable to the people, because she is a smart politician and we all have to work together to make sure this goes through.

There are a lot of student organizations out there and one group of student organizations that I am very concerned about being treated unfairly is the Greek system. I feel that there’s been a lot of negative press about them, and I understand that there are a few bad apples, but overall I feel that most of the people within the Greek system are upstanding, honorable citizens. So I will protect their reputation and if a fraternity is accused of unsavory behavior, I will make sure I have all the facts before taking action against them. I don’t want a situation to happen like at the University of Virginia last fall with the Rolling Stone article. A fraternity was accused of horrific gang rape and the school closed down every single frat on campus before learning that the Rolling Stone article was based on faulty information. So I will stand up for due process. I will make sure that fraternities and sororities in the Greek system are given a fair chance, that they are not maligned or accused of horrible things, and that all accusations are proven true. As far as student organizations, I also think we need to be careful about funding. There are lots of great organizations out there and I support a lot of what they are doing, but there are students in Isla Vista who are struggling to pay their bills, who are struggling to pay ends meet, and so as AS president I feel that it would be my responsibility to speak for those students as well, and to make sure that we don’t spend too much on esoteric organizations to the point where it takes away from the general interest of the student body.

I am also going to get rid of restrictive rules on student organizations. For instance, one thing that I came across while reading about this issue is that fraternities at UCSB are not allowed to serve alcohol at events with more than 30 people if that event occurs at a fraternity house or a satellite house. So I think that’s an unnecessary rule. I believe the people who are a legal drinking age should be allowed to consume whatever they want, and I will make sure that rule is overturned. We can address violence as violence. There is no need to consider alcohol as violence. My job as AS president is to punish criminals, not to take away the rights of students because they might potentially be criminals in some universe.

That is a huge concern of mine, and I’m glad you asked about it. As AS president I will evaluate everything I spend money on with two criteria. First, is it something that tangibly benefits the students? And second, is there no other way that this could be funded in any way other than student fees. And if the answer to one of these questions is no, then cuts will need to be made, and if the answer to both of those questions is no, then I don’t see why we are funding it at all. I understand that a lot of what we are doing benefits students, but as I said, I think that when people are struggling in Isla Vista, when people are struggling just to be here, then there is no reason why we should be making college more expensive. Another think I’d like to point out is that UCSB is spending more than any other school through the UC Students Association. That’s because we have been picking up the slack for a lot of other schools, and so we are spending almost $140,000, which is almost twice as much as the next UC. Riverside is spending around $70,000. So I don’t believe that we should be covering for all these other schools, and as AS president I will make sure that we go back to paying for our fair share. I don’t advocate withdrawing from UCSA entirely because it is a good vehicle for hearing student voices, but I will threaten to withdraw entirely unless we go back to paying the fair amount for us as a UC. I think it’s ridiculous that we have to pay twice as much as any other school and it’s an unnecessary burden for these students here.