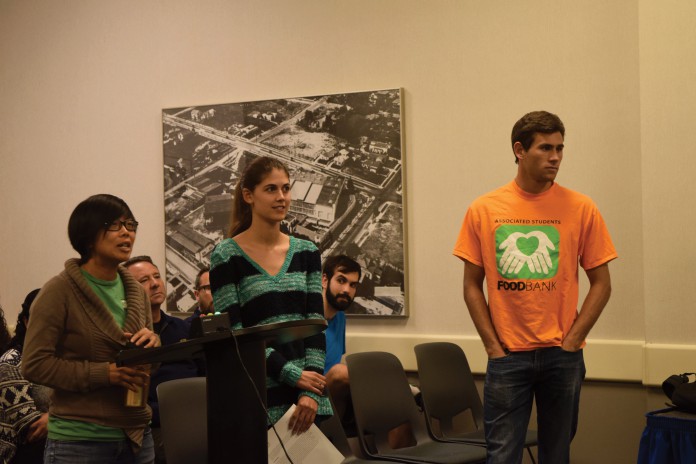 Representatives from the Associated Students Food Bank spoke on behalf of A Resolution in Support of the AS Food Bank as a Food Center at the April 22 meeting of AS Senate. The resolution, authored by Steven Kwok and Hiro Bower, states that Senate “supports the AS Food Bank’s efforts in exploring alternative space options,” both on- and off-campus, due to the demand for a larger space in order to accommodate for over 2,500 students who have used the Food Bank’s services during the 2014-2015 academic year, as of Spring 2015.

“We want to move towards a more comprehensive plan to look at food security in general, and not just only food banking, which is essentially providing folks with food,” said Food Bank Coordinator Tuyen Nguyen. “We hope, eventually, that we will be able to get to the peak of 3,000 clients and then decrease from that, with the centralizing of resources within [a larger] space… to be able to bring and ensure that our clients within that [space] are able to access budgeting workshops to services like CalFresh to potentially financial aid advisors.”

Food Bank Committee Chair and student sponsor of the resolution Katie Freeze, as well as Vice Chair and resolution liaison Erick Lankey, discussed the numerous benefits of providing a larger space for the Food Bank.

“As you all know, we do have fresh produce on Mondays and Wednesdays that do provide options, but that fresh produce isn’t always the most consistent,” said Lankey. “Sometimes we’ll have ten options one week and others we might have three or four… It’s really hard to give somebody ten different options and the next week give them three options, and then try to tell them to make a meal out of that when they don’t have the resources to make that meal.”

Lankey stated that relocating the Food Bank to a larger space on or off campus would allow for the possibility to offer resources such as cooking demonstrations and food budgeting skills on-site. Due to the current size of the space, students must wait in line until it is their turn, and at times, approximately 30-40 students are waiting in line at the Food Bank in order to receive food and resources. While the waiting room may serve as a study or eating space when the Food Bank is not busy, the room is not large enough to accommodate over 30 students.

“Our idea was to get an enhanced space so seven students can shop freely for five minutes without having AS Food Bank staff coming in and interrupting them [while] trying to restock, as well as having a space for them to relax and sit down,” said Lankey. “[The space would be] a place to build relationships as well as share resources with others.”

The larger space would provide students with a stress-relieving environment while they find time to use the Food Bank’s services despite their hectic class schedules. In order to fund the new space, the university has received $75,000 from Global Food Initiative and the University of California Office of the President. However, because this funding will last through June 2016 and the Food Bank’s lock-in fee will last through 2017, the unit is requiring $150,000 to match the amount of funding the Food Bank is currently receiving in order to implement services that accommodate for the current amount of students using the Food Bank’s services.

“What we are hoping is with few students needing to be serviced due to increased budgeting workshops and increased educational opportunities, we will be able to provide higher quality food for our students in the long run, including… a wider variety of fresh produce [and] more culturally appropriate options for our students, as well,” said Freeze.

Additionally, a Food Security Team will be installed and supported by Chancellor Yang. The team is a coalition of students, staff, and faculty that will discuss the direction of the resolution as well as the long term provision for the benefits of the larger space and expansion of the Food Bank’s services. Lankey stated that he believes the largest way in which AS is outreaching to and providing for disadvantaged students is through the Food Bank.

“This all culminates into the idea of creating a campus food center,” said Lankey. “Even though we are providing food, there is so much more that could be provided… Ideally, we want to be able to enhance students’ lives so that they don’t need to be able to depend on a food bank service. So if they have cooking demos, and if they have budgeting workshops, and if they have housing resources… to have a chance [for those resources] to culminate into a food center, that is what we were thinking to be able to anchor ourselves as one of the ways that students can come and actually feel like they have everything that is being provided to them.”

The resolution was sent to University Affairs Committee, where it will be discussed on April 28.