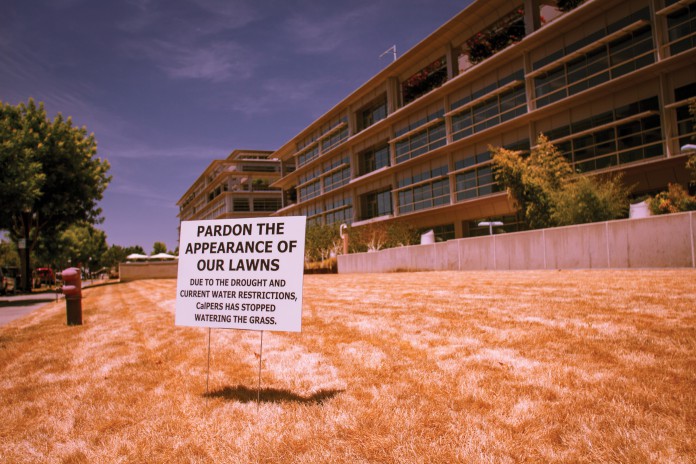 As the state’s water crisis continues into its fourth year, the severe drought continues to plague crops, deplete water sources, and increase concern over the future of California’s farm-dependent communities. In response, the state government approved a $1.1 billion drought relief package that is expected to fund new water infrastructure projects and provide emergency financial assistance to farming communities and farmers out of work.

The legislation, signed by Gov. Jerry Brown on March 27, is a mixture of funding for previously approved infrastructure and flood control projects, the building of desalination plants to produce clean water from the ocean, and aid for Central Valley farmer communities facing low crop yields and fewer water sources.

The state government also approved a similar $687 million measure last year for storm water recycling and similar projects. Since the bill was approved last year, only one third of that funding has been spent.

The new emergency relief package is focused more on preparation for future water crises rather than solving the immediate problem or reversing its effects. The money will not be enough to rescue the state from the drought, but should work towards minimizing the effects of future droughts. $127.8 million will go toward food and water supplies and environmental protection measures. $272.7 million will be for projects like recycling sewage water and improving water treatment facilities. $660 million will be set aside for flood-control projects to help replenish depleted groundwater reserves once the state experiences normal rainfall again.

The traditional rainy season produced very little rainfall and snow levels are likely to be very low in the Sierra Nevada mountains—meaning very little water will be flowing from there. Little rainfall and record heat has drained the state’s reservoirs, which now store merely a year’s worth of water instead of the usual three. But surface water (water that comes from reservoirs, rivers, lakes, streams) only makes up 25 percent of California’s water supply; groundwater now makes up the other 75 percent. Before the state declared drought in 2011, surface water took up two thirds of the water supply while groundwater took up the remaining third. Since the drought was declared, Central Valley farmers have been faced with a shortage of surface water and have turned to drilling new holes and pumping out groundwater to irrigate their farms.

The legislation has faced some criticism from the environmental community because it does not include mandatory statewide water restrictions. Although the legislation itself does not contain statewide restriction on water usage, California state water officials recently announced a set of new water conservation rules for homes and businesses that will go into effect on April 15. A few of the rules require restaurants to no longer offer water to customers unless requested, and homeowners will be banned from watering lawns after rainfall.

According to a 2012 study by the Pacific Institute, a nonprofit research and policy organization, direct use of water—this includes drinking, watering your lawn, or simply taking a shower—only makes up 4 percent of California’s total water footprint. In fact, 93 percent of the state’s water footprint can be attributed to California’s agriculture industry. Of this 93 percent, 47 percent comes from meat and dairy products while 46 percent comes from other agricultural products.

The average Californian uses about 140 gallons of water per day for direct use purposes like bathing, drinking, and washing clothes, but this amount is nothing compared to the remaining water footprint of the state. The study found that “California’s total water footprint is about 64 million acre-feet per year, or 20 trillion gallons of water per year, which is more than double the annual average combined flows of the state’s two largest rivers, the Sacramento and San Joaquin Rivers.” This data suggests that the new rules will likely do very little to minimize the effects of one of California’s worst droughts in decades.