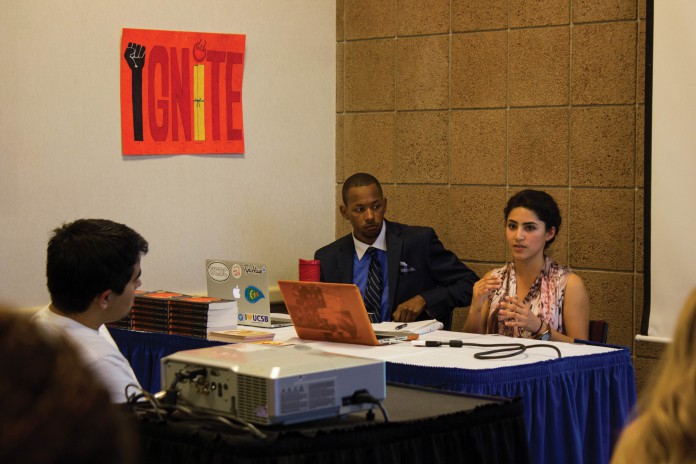 University of California, Santa Barbara students gathered in the Santa Barbara Mission Room at the UCen on Feb. 25 to attend a teach-in workshop concerning the school-to-prison pipeline, California’s prison system, and transforming higher education. The workshop was hosted by UCSB’s IGNITE campaign, along with UCSB Reads.

IGNITE stands for Invest in Graduation Not Incarceration, Transform Education. The statewide campaign, put on by each campus’ UC Student Association, aims to raise awareness of California’s disinvestment in education and investment in the state incarceration system. They also focus on the systematic inequalities that people of color face in the higher education system, and how students can make a change.

The event included a presentation about UCSB Reads, a campaign to get UCSB students and the Santa Barbara community reading the same book during winter quarter. UCSB Reads ties the book choice of the year to the campaign, and the 2015 book choice is Piper Kerman’s Orange Is The New Black. Assistant University Librarian for Outreach Rebecca Metzger passed out copies of the book at the IGNITE/UCSB Reads teach-in, in an effort to get more students involved with both campaigns.

IGNITE Campaign Coordinator and fourth-year political science and global studies double major Ryan Fluence and U.S. Student Association Non-Traditional/First Generation Caucus Chair Joseline Garcia shared statistics concerning the school-to-prison pipeline, and the difficulties people of color experience in higher education. For example, only one university (UC Merced) has been opened in California over the past decade, while 23 prisons/correctional facilities have had a grand opening since.

The workshop featured parts of a presentation by Garcia, a third-year double major in global studies and art, who serves as a member of the USSA. USSA focuses on motivating students to become grassroots activists for issues and campaigns they deem important, such as “State of Emergency: A Campaign to Increase Recruitment and Retention of Students of Color,“ featured at the IGNITE/UCSB Reads workshop.

The “emergency” the teach-in focused on covered the injustices that people of color face in education, despite the Brown v. Board of Education (1954) ruling. Extreme segregation, underfunding of public education, inadequate outreach to underrepresented communities, and a lack of support for and retention of students of color leads to worsening conditions in the educational system. With an underrepresented minority, education begins to suffer—students of color feel deterred from pursuing higher education, and students in general won’t benefit from experiences shared by a diverse community.

For Fluence, campaigns like IGNITE helped shed light on the injustices he was unaware of growing up in New Orleans. At the teach-in, he explained many of the reasons that minorities enter and stay in higher education at lower rates than other students, including resonating effects from Affirmative Action, Brown v. Board of Education, and many more.

“I did not understand how this system in New Orleans was a systematic way of holding back minorities from higher education and becoming positive members in society,” explained Fluence. “I was able to get a first-hand grasp of why the statistics of African-Americans graduating high school and entering college was so low. It was systematically harder for them to do so, in comparison to the more privileged.”

IGNITE will continue campaigning throughout the year, launching their website, producing promotional gear, and working further with other social justice and awareness organizations, such as Associated Students’ Student Initiated Recruitment and Retention Committee, Black Student Union, and the Student Commission On Racial Equality.

“I think it has an impact on every single student in some way,” said Garcia. “The fact that the state prioritizes prison over education is the reason why tuition is so expensive. It doesn’t matter what race you are, you pay the same tuition. It’s not just a students of color issue. We have the opportunity to create change—if we don’t get involved, higher education will be accessible for very few individuals, which we don’t want.”