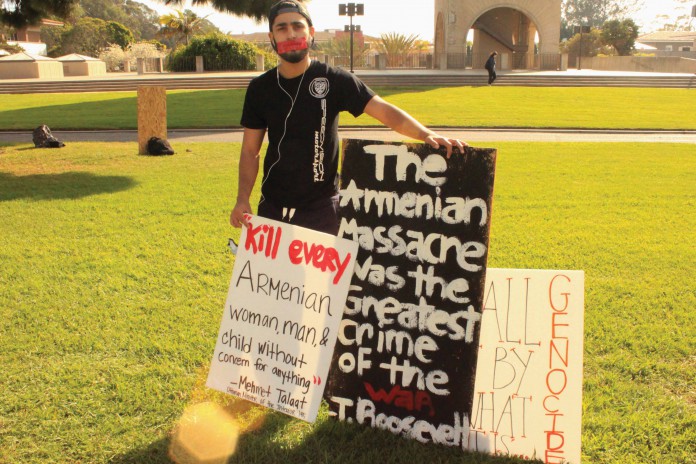 The University of California, Santa Barbara Armenian Student Association held a silent protest on Feb. 5 across from Storke Tower to denounce the Turkish government’s continued denial of the Armenian genocide. 2015 marks the 100th anniversary of the genocide perpetrated by the Ottomans that triggered a diaspora of the Armenian people.

President of UCSB’s Armenian Student Association and fourth-year sociology and Slavic languages and literature major Hasmik Baghdasaryan organized the silent protest. The goal of the protest was to bring awareness to an issue that receives little to no attention in modern classrooms.

“There’s this whole big chunk of history missing from people’s knowledge,” Baghdasaryan said. ”This is a big enough part of history that we want to talk about it.”

The protest’s silent nature attracted curious passersby, and the protesters engaged them in what they feel is a critical conversation. ”As someone whose family was directly affected by the genocide, it’s more or less disrespectful to have people completely deny the fact that this is part of history, that this was a genocide,” Baghdasaryan said. ”Not just some part of some war where people die. It was sanctioned with the purpose of cleansing ethnic minorities.”

Protesters wore black clothing and taped coverings over their mouths, meant to signify “the denial by the Turkish government and the silence by everyone else who hasn’t accepted it,” Baghdasaryan said. Indeed, the federal government of the United States has yet to recognize the Armenian genocide, though 42 individual states, including California, have officially recognized it.

The Armenian Student Association is a larger organization with subgroups at universities throughout California, and it protests the international community’s denial of the genocide on an annual basis. ASA at UCSB has made it their primary aim to include the genocide in the modern historical education lexicon.

“This year we started working with the Armenian National Committee of America, which is a big lobbying organization to get the different UC’s to pass a resolution about the recognition and education on the Armenian genocide,” said Baghdasaryan. The University of California, Los Angeles passed a resolution to divest from the Republic of Turkey in January of this year. Though UCSB’s ASA chapter will not be pursuing such a resolution this year, it hopes to continue raising awareness on campus.

There is a large Armenian community on campus, and the ASA meets on Wednesdays at 8 PM in the Middle Eastern Resource Center, which is housed in the Student Resource Building.