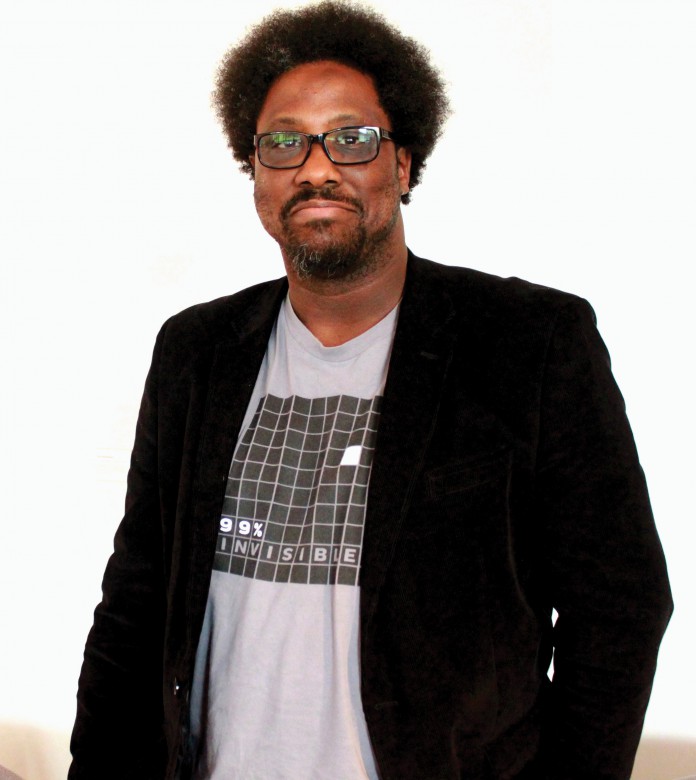 “Race isn’t real, it’s not a real thing. It’s not a real science,” said W. Kamau Bell on the night of Thursday, Feb. 5, at Campbell Hall. “Believing in race is like believing your fantasy football team is playing just for you. But because we have bought into the concept of race, racism becomes a very real thing.”

At an event entitled “The W. Kamau Bell Curve: Ending Racism in About an Hour,” hosted by University of California, Santa Barbara Arts & Lectures, Bell began a conversation that many people today are too uncomfortable to start themselves, or even participate in or contemplate.

Bell boldly and hilariously opened the floor for a discussion about the “taboo” topic of racism. However, this wasn’t a lecture or a blanket condemnation of all the audience members. Bell approaches the issue of race through a successful mix of serious content leavened with a great deal of comedy that allows students and others to open themselves up to a touchy subject. His talk ranged from racism within politics to that in sports and finally to his personal experiences with racism.

As a socio-political comedian, Bell feels that “politics [are] a great way to follow all of the weird ins and outs of racism in this country… there’s always something going on that can lead into an awkward discussion about the thing.” And an “awkward discussion” is exactly what Bell sees as the first step towards real change.

Bell spent a large portion of his talk addressing Barack Obama’s presidency and the myths that surrounded his initial election. “It was the beginning of the new racism,” he said. He elaborated that often in politics one can observe politicians or media representatives attempting to be nice but actually being blatantly racist.

He discussed his own disappointment with Obama alongside the media’s representation of our current president. He says, “I am a fan of Barack. I’m not really in love with him anymore,” calling this now faded love “50 shades of mixed.”

Bell has been disappointed by Obama’s inability to achieve the change that was promised during his initial campaign and subsequent election. Of course Bell wasn’t under the erroneous impression that the election of Obama would lead to a “post-racial America,” a term that he says is simply made up. What alarms him is the stagnation in this country in regard to change; will there ever be a post-racial America?

He discussed Jeremy Lin and sports teams that are built on the foundation of racism, particularly towards Native Americans. He addressed prejudice not just towards African-Americans, but also Asians, Arabs, Latinos, and Native Americans, all of whom are often glossed over in the media.

The most moving portion of his talk, however, was when he told the story of his own recent experience with racism. About two weeks before his show, Bell said he was having a birthday breakfast with his white wife and her white female friends. As he stood to leave he continued to chat with the women. A white waitress observed the interaction and told Bell to “scram” as she thought he was trying to sell the women something. As Bell told this story, it was clear how much the experience had pained him. He asked white audience members how the story affected them, and an audience member said that it made her feel embarrassed. He argues that white people tend to buy into the concept of race when it is about others but distance themselves from the idea when it comes to the actions of their own race, which will never result in real change.

Finally, the emotional high point of the evening arrived when Bell discussed the birth of his child. “Having my first daughter Sammy started to open my perspective a different way about racism,” he remarked, “because when she was first born… I realized that this was the first time in my life that I was meeting somebody and I knew beyond a shadow of a doubt that they weren’t thinking about me as black.”