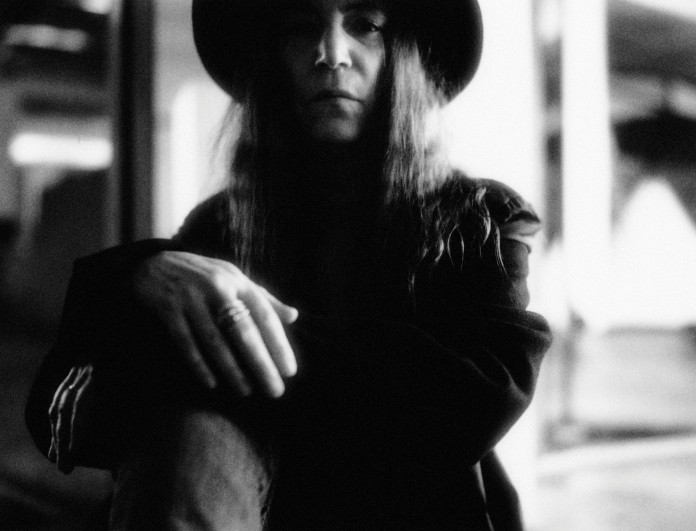 Maintaining the energy and drive to actively pursue passions gets harder as you get older. When your body ages, you begin to lose the seemingly limitless supply of physical energy that defined your peak years, and the feeling fades deeper into your memory. Yes, it’s depressing, and it’s probably going to happen to you when your keg stand-fueled blackout days are long over and your worries shift to the possibility that you and your liver might not make it to 65. Even so, watching the 68 year-old Patti Smith take the stage at the Granada Theater in downtown Santa Barbara on Tuesday, Jan. 27, dispelled all doubts that the legendary punk rocker has succumbed to this staggering obstacle of age.

Smith sang in the same unmistakable vocal style that propelled her to rock stardom with prowess and grace, accentuating her deep, shaking croon and quickly jumping from soulful power to quiet, almost Dylan-esque spoken word.

Smith lived up to her title of “the poet laureate of punk,” as in between songs she showed off a poetic, and strongly improvisational, sense of humor. About 20 minutes into her set, she broke off from the set list and randomly began singing a song about pigs. “What exactly does hogwash mean?” she asks. “Don’t you know pigs are innately clean? We feed them garbage, let them roll in shit. They get a bad rap because of it.” The funny banter continued throughout the show, usually expressed when interacting with unintelligible hecklers by praising them for being the loudest in the crowd.

Her set went from mid-tempo rockers to ballads with the song “This Is the Girl,” which Smith dedicated to the late R&B singer Amy Winehouse. The song spun a tale of a girl who “is having a ball” but is simultaneously “for whom all tears fall,” an accurate depiction of Winehouse’s ultimately tragic struggle with addiction. Smith then covered “The Stable Song” by Gregory Alan Isakov, a sentimental folksy ballad, continuing the show’s slow, sweet pace.

The concert soon picked up the energy with “My Little Red Book,” a loud thumping rocker. Smith’s longtime drummer, Jay Dee Daugherty, showed his pinpoint virtuosity through a three-minute barrage of tom and snare rolls, keeping the beat with smallest and most rapid of subdivisions interrupted by thundering, time signature-altering triplets.

Playing alongside Smith and Daugherty was lead guitarist Lenny Kaye. Kaye has been with Smith since the beginning of her career, lending his guitar chops since her classic debut LP Horses. The show was partially a testament to Kaye and Smith’s chemistry. They traded dance moves throughout, syncing it with call and response between her vocals and his guitar playing.

The call and response was especially heavy in “Ain’t it Strange,” off of Smith’s second album Radio Ethiopia. The song was an ascending crescendo of raw energy leading into an anvil drop of a chorus as Smith wailed, “Oh don’t you know that anyone can come/And they come and they call and they fall on the floor.” The song had a shadowy, mystical feel, making the concert seem more like a religious experience.

Then the show reached a tender moment as Smith spoke about her deceased husband, Fred “Sonic” Smith, and the song she wrote for him. “When I sing the words to this song, it is as if it is the first time,” she said as she launched into “Because the Night,” a song she co-wrote with Bruce Springsteen that ended up becoming her biggest hit. The sentimentality continued when she played “Pissing in a River,” a tune off Radio Ethiopia that borrows heavily from The Animals’ classic song “House of the Rising Sun.” Smith reminisced that “House of the Rising Sun,” was the “first song I hit all the notes to and impressed my siblings.”

As the concert drew to a close, Smith expressed the most punk-rock sentiment of the night: “I think all the dogs are at the film festival and we have here the finest and the lowest of the low.” If one of the founders of the New York punk scene playing a show for a bunch of starstruck old people in Santa Barbara is any evidence, the finest and lowest of the low will outlive the dogs and rock way harder in the process.