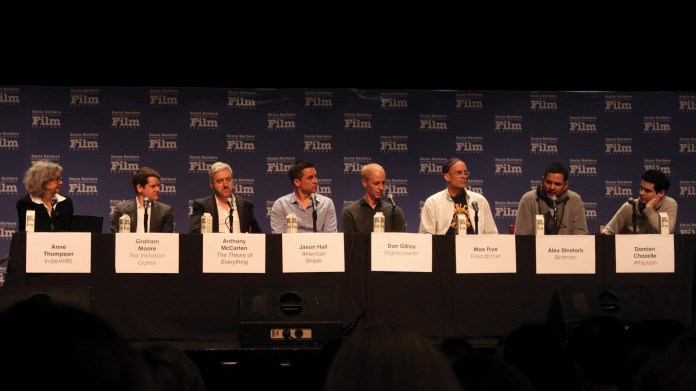 All great films must have a compelling plot, exceptional acting, and an artistry that that is both noticeable and real, but for a film to be truly exceptional, it must first have a great script. On the morning of Jan. 31, 2015, Santa Barbara’s Lobero Theater was fully packed with audience members eagerly gathered for the “It Starts with the Script” panel of highly-acclaimed screenwriters. These seven Hollywood professionals from Oscar-nominated films came together for an entertaining and informative group discussion as part of the Santa Barbara International Film Festival.
The esteemed panel of writers present included Damien Chazelle (Whiplash), Alex Dinelaris (Birdman), Max Frye (Foxcatcher), Dan Gilroy (Nightcrawler), Jason Hall (American Sniper), Anthony McCarten (The Theory of Everything), and Graham Moore (The Imitation Game), all of whom have been nominated for the upcoming 87th Academy Awards.

The screenwriters started off the event by sharing how they came to be such distinguished figures in the Hollywood industry, and a striking similarity among their careers showed how all of them spent years diligently working and battling writers’ block before they finally became established in the competitive entertainment business.

“I wish I could say I was a playwright,” Hall of American Sniper joked. “I was a really bad actor. I started writing roles for myself, and no one really wanted me to play the roles I wrote.”

“Ninety percent of my writing process is me sort of sitting on couches, surfing channels, and feeling really shitty about myself,” Chazelle of Whiplash said. “I used to feel really bad about that and it certainly lowers your self-esteem… But I sort of realized that’s where the writing happens.”

In a movie industry frequently criticized as a creativity-stifling business that mass-produces formulaic plotlines with indistinguishable characters, these scriptwriters have revealed that though they’ve felt this pressure, their recent movies depict their attempts to break out of the generic mold.

“I do a studio job, and I felt increasingly constrained by the small box that you’re allowed to move in,” Gilroy of Nightcrawler confessed. “Everything has to be explained, characters need to be redeemed, you have to like those characters… And I was just in an annoyed mood, so I wrote a script for myself in which I decided to break every narrative rule.”

These screenwriters developed their unique plotlines by forming strong relationships with their subject matters, developing personal ties with the people they based their movies on, and fully delving into the fictional worlds they created. The result is a story that contains deep sentimental value for the writers, as its personal meaning transcends beyond just another Hollywood script.

Moore of The Imitation Game, which depicts a homosexual mathematician, elaborated on his privilege of being able to create dialogue about the LGBTQ community.

“I want there to be loud popular debates about how gays and lesbians are portrayed onscreen, and that’s important,” Moore said. “We’re really glad that our film can be a part of that conversation.”

An emotional moment for everyone occurred when Hall described his first meeting with Chris Kyle, the most lethal sniper in American history and the subject of American Sniper. When he first encountered Kyle, he was extremely doubtful he’d be able to get story out of someone who had suffered so much. However, when Hall watched him interact with his family, he saw a touching transformation overtake the traumatized war veteran.

“He spread his arms to his kids, and I saw something happen in this guy’s face, and it was a different person than the one I’d seen in the last 24 hours,” Hall reminisced. “I watched him and realized there’s somebody else here; somebody else went off to war, and this is what came back.”

In an interview with The Bottom Line, Hall spoke of the now deceased veteran and his widowed wife with great esteem.

“It was a great honor to get to meet him and work with him before he was murdered,” Hall said. “I was honored that his wife chose to take me on this journey with her grief, and elaborate on this love story between two of them that was unlike anything I’ve ever heard.”

The screenwriters’ two hours onstage were full of humorous anecdotes, revealing details about their journey of writing, and personal backstories behind their award-winning scripts. As a result, movie enthusiasts were exposed to the rise and falls of the writer’s journey and their diligent efforts exerted in creating these Hollywood blockbusters.