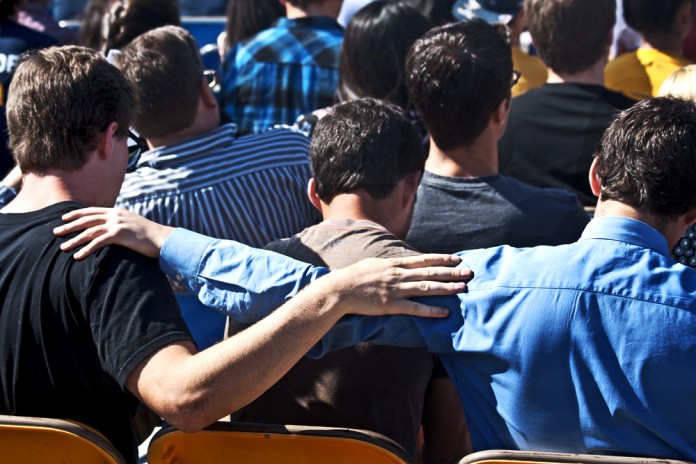 Eight of the most devastating minutes in Isla Vista history are effectively dissected by the 64-page report released on Wednesday, Feb. 18, by the Santa Barbara County Sheriff’s Office after almost nine months of investigation into the shooting that claimed seven lives last May.

The report paints a picture of a severely disturbed individual and the calculations that led him to murder his two roommates and a third student before embarking on a vehicular rampage through IV, attempting to gun down or crash into pedestrians in his path. However, it paints a more hopeful picture of the heroism and compassion exhibited by both law enforcement officials and civilians who risked their personal safety to care for and protect fellow members of the IV community on the night of May 23.

It documents, for instance, the experience of IV resident Kyle Sullivan, who ran to the site of the first shooting outside of the Alpha Phi sorority house to offer aid to Katherine Cooper, Veronica Weiss, and Bianca DeKock, who had been shot. Deputy assistance arrived shortly after, but amidst the chaos Sullivan noticed DeKock, the only survivor of the three, trying to speak to her mother on her cell phone. Since Deputy Patrick Genovese was busy tending to DeKock’s wounds and communicating with police dispatch, Sullivan took it upon himself to communicate to DeKock’s mother that though her daughter was very frightened, she was going to live.

When more gunfire was heard from the area near IV Deli Mart, law enforcement on the scene outside Alpha Phi told civilians to clear the area and hide indoors. Sullivan, concerned that bystanders in the region surrounding the store were unaware of the danger at hand, yelled to them as he made his way toward the intersection of Embarcadero del Norte and Pardall Road, telling them to get inside due to the presence of a gunman nearby.

Meanwhile, the swift arrival of Genovese on the scene outside the sorority house was just as swiftly supplemented by the combined actions of Sergeant Dan Wilson, Corporal Greg Pierce, Officer Brad Prows, and Sheriff’s Deputy William Coffman, who quickly began efforts to secure the scene. Prows and Pierce began administering medical aid such as CPR, while Wilson blocked traffic and Coffman armed himself to protect victims and those providing aid.

This heroism continued at IV Deli Mart, where Christopher Michaels-Martinez was shot as he entered the store, intending to take cover. Deputy Justin DiPinto promptly began performing CPR on Michaels-Martinez, which went uninterrupted due to voluntary aid provided by civilians Jeremy Varela, Erin Bullard, Justin Smaine, and Alyssa Hopper even after DiPinto was called away to the site where the suspect and officers had begun exchanging gunfire.

The report goes on to portray the courage of Summer Young, who stayed outside to call 9-1-1 after Jin Fu was struck by the suspect’s vehicle and thrown into the air. It describes the goodwill of Mallory Weberski and Jenna Good, who likewise tended to an injured Nicholas Pasichuke after the vehicle sent him flying. It names Alex Zazzela, David Campbell, and Alexander Kurdian among those who wasted no time tending to wounded friends and fellow community members who were cursed by whatever coincidence placed them in the path of a bullet that night.

As the short-lived terror rapidly approached its end, the suspect engaged deputies in fire by aiming shots toward their position in Acorn Park as he drove down Sabado Tarde Road into its intersection with El Embarcadero. In a show of instinctive bravery, Sergeant Brad Welch, Detective Brian Flick, and Deputy Jorden Walker returned fire, approaching the speeding vehicle as it fled the scene.

In the following instant, Senior Deputy Smith ran to the closest patrol car, pausing only to broadcast the suspect’s position on his radio before taking off in the direction he had gone, west down Del Playa Drive. Within less than a minute, he heard a broadcast come through from Deputy Adrien Marquez indicating that the suspect had crashed at the intersection of Del Playa and Camino Pescadero. And just like that, the barbarity was contained almost as quickly as it had escalated, thanks to the efforts of a community compelled by solidarity even in the face of such inexplicable delusion and rage.

Overall, the investigation examined 17 crime scenes, seven deaths, 14 attempted homicides, 250 investigative documents, and hundreds of dispatch calls from that night. Evidence used to piece together the timeline of the tragedy consisted of reports, surveillance footage, pictures, cell phone videos, search warrant returns, and dispatch audio files. Evidence used to construct a profile of the suspect and a chronological account of events leading up to May 23 included cell phone records, email accounts, social media content, and records pertaining to the academics, finances, and mental health of the killer.

One question brought up by the report’s release has been why, exactly, so much time was needed to conduct the investigation of what would appear to be an open-and-shut case. Sheriff’s Office Public Information Officer Kelly Hoover said that the answer to this question at the start of the investigation had been to determine whether or not the killer had acted alone in planning and executing the attack.

Hoover said that it did not take long for authorities to rule out the possibility of an accomplice, but it remained the duty of law enforcement to explore all aspects of the case to compile the most thorough account of events possible.

“Even though the suspect in this case committed suicide, we still needed to carefully and methodically look into the case,” she said. “And it was our responsibility; we owed it to the victims’ families and to the public to provide a documented explanation of what occurred.”

Hoover said investigators hope the report will serve a preventative purpose as well.

“A key point of why it’s important to conduct an investigation and document it as we did is to hopefully learn what we can do better in the future and if there’s anything we can do to prevent another tragedy of this sort from happening,” she said.

She commended the work of the County Sheriff-Coroner in handling a case of a much more tragic nature than is usually seen in Santa Barbara County.

“A group that really handled a great deal during this is the Coroner’s Office,” Hoover said. “They’re not only having to investigate [the victims’] deaths, but also assist these families that have received the worst news of their lives and will never, ever be the same.”

In his self-authored introduction to the report, Sheriff-Coroner Bill Brown acknowledges the immense difficulty of making sense of a tragedy so senseless. When faced with the question of what can be done to prevent future such tragedies, he says, “There is no single or simple solution to the complex problems that lie beneath [them].”

Many of these complex problems, as told by the report, pertain to the killer’s past and his history of pervasive mental illness, rooted in extreme social anxiety that deluded his perceptions of the world and people around him. It is well known, at this point, that he was treated for these issues for most of his life but that “mental health professionals who saw and treated him did not see anything that would have predicted his future behavior.” This behavior included not only the shooting but its premeditation, embodied by the manifesto and YouTube video he released before embarking on the spree.

Indeed, though the report documents a great number of items found at the killer’s residence alluding to his intentions, such as weapons, journals, and material suggesting interests in the Third Reich and torture practices, as a loner he concealed these violent tendencies from those around him, namely the police officers who visited his residence on April 30, 2014 on a “check the welfare” call requested by his mother. Though both she and his father were conscious of his mental issues, both were “shocked he had firearms in the first place,” as his father is “vehemently against” having them in the house.

The 64 pages of investigative analysis disassemble those horrific eight minutes and within them piece together a narrative built out of every fact, statistic, and observation previously lost amidst the panic of that night. What they cannot definitively answer, however, is the question of why. Even the report acknowledges that this “why” is not addressed by the grisly details or concrete facts that it outlines; this “why” is the question of how a person justifies the senseless murder of another. Even after almost nine months of investigation, the report admits, “that question may never be answered conclusively.”