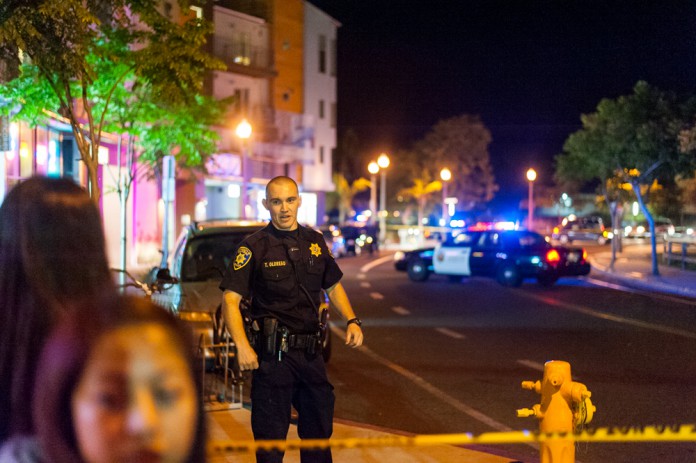 Isla Vista resident and Santa Barbara City College student Elliot Rodger, 22, engaged in what Santa Barbara Sheriff’s officials have labeled “a premeditated mass murder” on Friday, May 23, around 9:30 p.m. After killing three individuals in his apartment, Rodger drove his tinted-window black BMW in a winding loop through Isla Vista, and in the span of about 10 minutes, killed three more students and injured 13 before taking his own life on the 6500 block of Del Playa.

“It’s obviously a heartbreaking situation to see this happening in a community that is an adjacent community to our world class university,” said Santa Barbara County Sheriff Bill Brown at a late-night press conference a few hours after the incident. “But I think the problem with an incident like this is it’s obviously the work of a madman.”

Stephen Kaminski, Trauma Director for Santa Barbara Cottage Hospital, spoke at a second Sheriff’s Press Conference on Saturday, May 24, indicating that the identities of the 13 wounded could not yet be released. Though Kaminski could not characterize the specific injuries of the hospitalized victims, he did say that four patients had been treated and released. Of the seven people still hospitalized, two are in good condition, three are in fair condition, and two are in serious condition, he said. A Sheriff’s Office News Release notes additionally, four “were apparently injured by the suspect’s vehicle, eight sustained gunshot wounds and one sustained a minor injury from an unknown origin.”

As the Isla Vista community grieves for those lost, it has also confronted and denounced the hateful, misogynist, and homicidal rhetoric found in Rodger’s multiple manifestos.

In “Elliot Rodger’s Retribution,” a disturbing YouTube video posted immediately before the shooting, the killer calls himself “the supreme gentleman” and claims humanity deserves destruction, “just for the crime of living a better life than me.”

A 141-page semi-autobiographical manifesto has also surfaced, in which the killer details a personal history of “misery, rejection, loneliness, and pain.” Rife with misogyny, racism, entitlement, and a deranged plan to exact vengeance, he declared, “I will punish everyone.”

At the May 24 Press Conference, Sheriff Brown spoke on three reported contacts between Santa Barbara officers and the killer.

On July 21, 2013, Rodger sustained a broken leg and beating, and claimed to officers to be the victim of assault. The case was suspended, however, when IV Foot Patrol officers believed Rodger might have been the aggressor. His manifesto details the incident, in which he pretended to shoot partygoers and eventually attempted to throw female attendees off a balcony.

One of the killer’s neighbors, who wished to remain anonymous, recalled Rodger returning on that date to the Capri apartment complex bruised and beaten, screaming about killing his attackers and killing himself. The neighbor said he was able to calm the weeping Rodger down, but the two had few conversations beyond that time.

“There was nothing I could’ve done,” the neighbor said. “Maybe I could’ve postponed it, but he was a troubled kid.”

On January 15, 2014, Rodger accused his roommate of stealing three candles from him, with a total value of the items set at $22. Rodger performed a citizen’s arrest on his roommate, who was booked into jail and cited.

Lastly, on April 30, Sheriff’s deputies conducted a welfare check of the shooter at his residence, following a request from a family member. Brown said deputies found Rodger to be “courteous and polite… timid and shy” as he “expressed difficulties with his social life.” They ultimately “determined that he did not meet the criteria for an involuntary mental health pull.”

In his manifesto, Rodger related fear that his pre-meditated plan would have been uncovered. “[If] they demanded to search my room… That would have ended everything,” he wrote.

A previous neighbor said Rodger lashed out at him and his friends on one occasion, claiming he was a “God,” and saying, “I’m better than you guys. I’m better than all you guys.”

“When I heard that he did this, it wasn’t a surprise to me,” the previous neighbor said. “I wish that I could have done something about it.”

At a press conference on the day following the shooting, Sheriff Brown characterized the incident as “chaotic, rapidly unfolding, and convoluted,” with 12 crime scenes spread across 10 locations.

Rodger began his rampage by reportedly stabbing repeatedly Hong and Chen, his roommates, as well as Wang, who was either a third roommate or a visitor to the residence. Sheriff Brown described the scene as “horrific.”

It is unclear how Rodger was able to murder his roommates while also avoiding detection. His current neighbor noted, “I couldn’t hear a single thing.”

After killing the three victims at his residence, Rodger drove to the Alpha Phi sorority house where residents reported “loud and aggressive knocking” at the front of the building.

“Fortunately, no one opened the door,” Sheriff Brown said.

Rodger then left the scene, and witnesses reported seeing him shoot three female victims across the street. Cooper and Weiss died from their injuries, and a third female victim, who also received several gunshot wounds, was transported to the hospital.

“If the person has not been institutionalized or has not been taken against their will and put on a hold, then that information is not entered into a database and is not disqualifying information for purchasing a firearm legally,” he said.

Next, Rodger drove to the IV Deli Mart on Pardall Road, where he reportedly exited his vehicle, entered the building, and sprayed multiple shots throughout the shop. Michael-Martinez received multiple gunshot wounds at this location, and died at the scene.

Alyssa Hopper, a second-year philosophy major, was inside IV Deli Mart preparing for her transaction when the first shots were fired.

“It’s such a blur,” she said, remembering that though she first felt confusion at what was occurring, she was “just scared” at the realization that someone was firing a weapon. Video footage from the shooting shows the glass windows of a refrigerator shattering behind her before she pulls out her cell phone to call the police.

While Hopper was calling 911, “2 or 3” sheriffs arrived at IV Deli, where it became apparent that Michael-Martinez had sustained at least two wounds on his abdomen. They administered CPR to the victim before leaving the scene.

“As they arrived,” the press release indicates, “deputies witnessed the subject, who they didn’t know at the time was the shooter, flee eastbound in his black BMW.”

Sheriff Brown spoke generally on the police presence for Isla Vista that night.

“We would have had what we call a normal deployment for Isla Vista on a Friday evening, and typically those are deployments that are beefed up from our other time periods,” he said.

Hopper, who has been trained as a CPR first responder, administered CPR to the victim with another individual for “10 or 15 minutes” until an ambulance arrived.

“I don’t know where the sheriffs went at that point–they left,” she said. “Some people say wrong place at the wrong time but, you know, it was just literally the wrong time to be out in IV in general. I did all I could to save him and I cant believe that he didn’t make it.”

Rodger, driving his vehicle on the wrong side of the road, continued to the top of the Loop near Pizza My Heart and 7/11, where he fired multiple rounds at two people on the sidewalk, according to the news release. Then, moving eastbound to the 6500 block of Del Playa, he brandished his firearm at a female victim and fired additional rounds before turning westbound down DP.

Rodger fired at a lone Sheriff’s deputy responding to the area by foot, but as the deputy returned fire, Rodger fled down DP, striking and injuring a bicyclist within the 6600 block. Traveling to the corner of Sabado Tarde and Camino Del Sur, Rodger “fired multiple shots at pedestrians,” injuring three. Turning eastward again, he shot another victim at the corner of Camino Pescadero before being confronted by “four Sheriff’s deputies running across Acorn Park in response to the shootings.”

Three of the four officers exchanged gunfire with Rodger as he accelerated past them in his BMW, “striking the vehicle and shooting the suspect in his left hip area.”

After striking another bicyclist and colliding with several parked cars, the vehicle came to a stop. “Responding deputies immediately removed Rodger from the car and handcuffed him,” the press release notes, but Rodger was dead by an apparently self-inflicted gunshot wound to the head. Upon searching the vehicle, deputies uncovered an additional 400 rounds of ammunition in his possession.

“I want to commend the deputy sheriffs who engaged very resolutely this suspect very shortly after we were notified of this incident,” said Sheriff Brown hours after the attack. “There’s no question in my mind at this point that their resolute actions and valor in doing so very well may have prevented further loss of life and injury.”

That same night, at around 12:30 a.m., around 12 heavily armed officers could be seen entering the Capri Apartments on Seville Road. This is presumably where first entry to Rodger’s residence was made, and his first three victims were discovered.

“I think its really important to recognize that this type of incident could have occurred anywhere, that this is not does not appear to be tied to the community,” said Sheriff Brown. “In the days and weeks that follow there will be a very clearer picture of something that has turned out to be an all too common occurrence in our country, where someone who is obviously severely mentally disturbed resorts to extreme violence, and in the process, murders a significant number of innocent victims.”