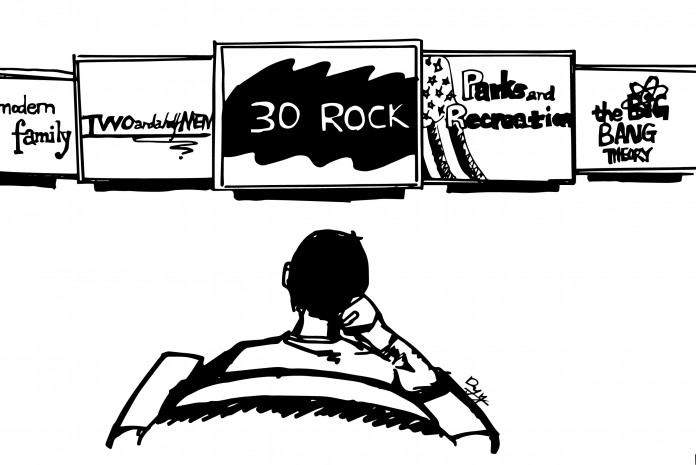 The state of the network sitcom isn’t what it used to be. Even just five years ago it seemed like network sitcoms were still king in television; shows like How I Met Your Mother, 30 Rock, Parks and Recreation, The Office, and Two and a Half Men controlled a large percentage of the television audience.

Things are looking pretty grim right now for the sitcom, though. All of the shows I mentioned above are either off the air or will be soon (Two and a Half Men ended earlier this month, and Parks and Recreation aired its series finale on Feb. 22). At the moment, Modern Family (ABC), New Girl (FOX), and The Big Bang Theory (CBS) seem to be the only major network sitcoms currently running, and even their quality is questionable nowadays.

Even the animated sitcom, which FOX really brought into the forefront with its Sunday night “Animation Domination” lineup, seems to be deteriorating. Animation staples like The Simpsons and Family Guy are struggling to maintain viewership, which is only made worse due to the drop in quality that these shows have demonstrated. It has gotten to the point where they are turning to crossover episodes between shows, such as last year’s the Simpsons/Family Guy crossover, in order to attract audiences (in a classic example of “shark jumping”).

It doesn’t help that the networks’ newest attempts at establishing successful sitcoms have resulted in countless blunders. NBC tried to revitalize their Thursday night comedy lineup in 2013 with The Michael J. Fox Show and Sean Saves the World, but despite the star power attached (Fox, and Will & Grace’s Sean Hayes), both shows were disasters that were loathed by critics and audiences alike, and were cancelled in a hurry. This year hasn’t been any better; to give you a sense of how bad it is, a few months ago, TBL reviewed three comedies in Fall 2014’s round of new pilots, and all three of them have already been cancelled.

It’s not that people suddenly hate sitcoms, as syndication is still big for sitcoms. Netflix viewing is also huge for these shows, as they are constantly appearing in the “Most Popular” section for streaming. So why is it that these new network sitcoms keep getting cancelled left and right?

It’s a complicated question, but much of the recent downturn in ratings of network sitcoms stems from content availability. It is so easy nowadays with Netflix and Hulu to watch well-reviewed shows that already have an abundance of episodes available. Instead of constantly looking to the networks for new shows to watch, audiences now have a huge back-catalog of content that is just a few clicks away at any given time. In this sense, it seems that the mainstream television audience is becoming more sensitive to quality, given just how much good television is out there and easy to access.

However, all is not lost for the network sitcom. The solution is so simple to see, but so difficult to achieve: they just need better shows. Audiences have way too much good content out there to settle for something subpar, but there will always be an audience for a great show, especially one on the major networks. If FX can be successful with cable sitcoms like It’s Always Sunny in Philadelphia and Louie, there’s no reason the major networks can’t find success with sitcoms.

It ultimately comes down to networks taking more risks with their shows. They need to stop playing it safe and instead put out shows that will intrigue audiences. They seem to be trying too hard to appeal to audiences using big name actors to draw in audiences, and while that may work for movies, television audiences are not going to invest themselves in a show if it can’t capture their attention within the first few episodes.

Whatever the networks decide to do to revitalize the sitcom, they had better do it soon. This is a period of immense change for the television industry, and if the network sitcom can’t regain relevancy soon, it may be too late for them to ever reclaim supremacy. Millions of people are now consuming their media through streaming sites instead of traditional over-the-air television channels. By the time NBC can reproduce a hit like Friends, we may be watching it on the NBC app for our iToilets.