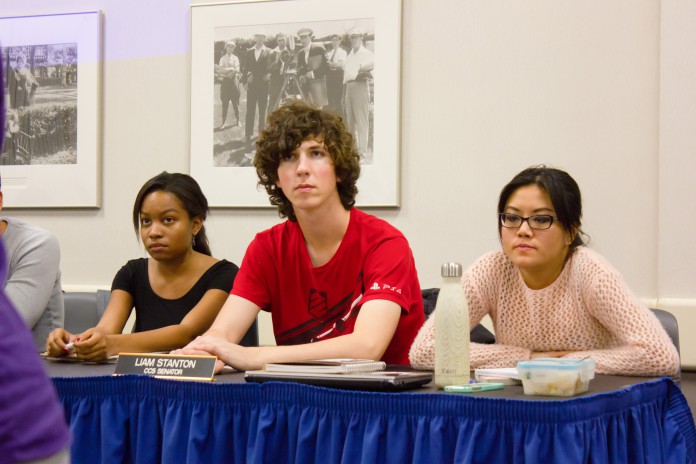 The Associated Students, as the student government of the University of California, Santa Barbara, is responsible for representing the undergraduates of UCSB by voicing and expressing students’ concerns and opinions to the UCSB community, administration, UC system, and state and local governments, according to the ASUCSB website. However, despite these responsibilities, the undergraduate students of UCSB are not fully and accurately having their voices represented by AS Senate, according to numerous exclusive sources within the organization.

Liam Stanton, a College of Creative Studies collegiate senator; Xin Ma, an Off-campus senator; Andre Theus, party chair of the Open People’s Party and Chief Financial Officer of the AS Finance and Business Committee; and Alex Smith, a former OPP senator, shared their experiences working within AS at UCSB.

Alex Smith is an anonymous former OPP senator who served during the 2013-2014 academic year. According to Smith, there is pervasive apathy and misconduct within AS Senate. Their name has been changed for the purpose of anonymity.

When asked to elaborate on their experience serving on AS Senate during the 2013-2014 academic year, Smith stated that soon after being elected they became aware of a culture of carelessness within senate.

“I quickly realized it’s people who are there for their own self-serving purposes,” said Smith. “On both sides you have people that genuinely care and will work their asses off, but that’s only a fourth of senate. You have 20-plus people on that senate board. Some of them just thought it would be fun to run. Others just genuinely care–so you have some people who will work their asses off to cover the other people who are completely lazy.”

Stanton currently holds a position on AS Senate, and ran for election as an independent candidate, unaffiliated with any political party.

Sharing his opinions on the Open People’s Party, Stanton stated that OPP has a “chokehold” on a majority of AS. He said that there are bills, authored by OPP members within senate, that are passed by senate because they are on OPP’s agenda, but not necessarily because they should rightly be passed. He elaborated in discussing OPP party goals, stating that also among the projects they ran on was a lock-in fee increase to fund the Legal Resources Center. The lock-in fee would have been increased to $9.37 for the Fall 2015, Winter 2016, and Spring 2016 quarters, and a portion of the funding would be used to implement a sobering center in Isla Vista, according to the Fall 2014 special election ballot. This initiative was reintroduced during the special election after it failed in the Spring 2014 election.

Off-campus senator Xin Ma, who ran with the Democratic Process party, also commented on the LRC lock-in fee and OPP’s attempt to reintroduce it.

“As a party, [OPP has] their own agenda and their own things that they want to get accomplished, and that’s why we have these things like the LRC,” said Ma. “But it was so contested, even [by] the people in the party itself.”

As the OPP Party Chair, Theus stated he “is OPP” and a public representative for the party. When asked of his opinion of the re-introduction of the LRC lock-in fee, he declined to comment, stating, “I’m not going to speak on the LRC. It’s not a project that I ever worked on, so I can’t give any opinion. I can give an opinion that if students feel like they should go for a lock-in fee then they should feel comfortable to do so. But I don’t necessarily want to comment on that.”

The party’s reintroduction of the LRC lock-in is an example of what Stanton believes to be the “unhealthy” effects of “OPP having control of Senate.” Stanton believes that OPP controls senate through its majority, and when asked whether he thinks this benefits the student body, he said, “OPP having control of senate makes it an efficient place, but it makes it a place where a few people control the whole agenda of AS. And I think that’s unhealthy.”

“You have power players, and then you have the rest of us,” said Stanton. “And there are projects that OPP ran on […] and they are willing to do almost anything to get their project [accomplished].”

Ma alluded to party obligations of OPP senators as well.

“I have heard [from current OPP senators] that when they became a senator, they were expected to be a certain person and vote a certain way and give more time to certain things, but because they didn’t they’re not as involved in the whole party,” said Ma. “So it’s interesting because there’s that, and then there are the really OPP people who are for everything they believe or want to accomplish, and then there are the people who ran with that party, but their ideas, […] their own personal goals are different.”

“I know students vote and they’re in, but what about the students who voted for the DP members who don’t get that [representation]?” said Ma. “There is still a portion of the student body that is not being represented, and even if the larger portion outnumbers, they still matter. I think that definitely affects the different bills and things that get proposed, but I can’t speak to what because I don’t know what it would be like if all DP members would’ve [been elected].”

This is the first installment in “Guilt by Association”—a series of investigative articles into student government and campus representation. New articles will be published in the coming weeks.