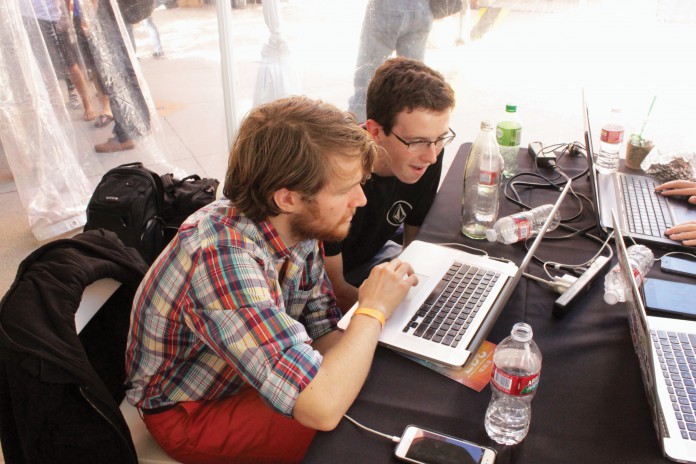 Busloads of students from across the state converged on the UCen last weekend to test their coding capabilities and compete for top tech prizes in University of California, Santa Barbara’s first ever hacking marathon, SB Hacks.

Planned since April 2014, the event marked the communal culmination of UCSB’s programming potential. “The primary goal here was to forge a community of hackers in Santa Barbara,” said co-founder Trevor Frese, a fourth-year computer science major.

The event was sponsored by a multitude of software and technology companies, including Citrix, Cisco, OpenGov, Microsoft, and Intel, which provided funding for the event, hardware, and technical advice, as well as job placement opportunities.

“Not only are these people coming to code and hack as a competition, but they may potentially end up with an internship at the end of it all,” said Marketing Director Jennifer Wang, a second-year economics and accounting major.

With around 500 students and nearly two dozen sponsors, the atmosphere of the event was impressive.

“The scale of this is awesome” said Mike Walters, Vice President of Micro-Camera Product Management at FLIR. “The energy is awesome. It kind of reminds you of why you wanted to be an engineer.”

Students from schools across the state, including UC Berkeley, University of California, Los Angeles and University of California, San Diego, arrived to compete alongside Santa Barbara’s finest in the 36-hour hacking marathon. The hackathon featured focused coding categories that spanned from environmentalism to iOS app development, and this interesting variety was mirrored in the expectations of the attending industry professionals.

“It’s just very cool to see the things that people produce in such a short amount of time,” said Harry Presman, a Citrix software engineer. “I want to see the innovation and the unique ideas that come out of this.”

The event began on the night of Friday, Jan. 30, with introductions from the sponsoring companies and outlines of their specific hardware and software packages. The hacking marathon commenced at 9:30 PM, but programming wasn’t the only thing on the schedule.

“There’s no point in staying up for 48 hours unless you’re having a blast,” said keynote speaker Bernd Oliver Christiansen, CTO of Citrix Saas.

With activities such as morning yoga, a silent disco, and walks to the beach, the hackathon highlighted UCSB’s laid-back flavor of academia.

“It’s a beautiful campus so we really wanted to use our beach to our advantage,” said Wang, “Our theme is just a really relaxed hackathon compared to other schools like UC Berkeley or UCLA [where] it’s more rigid, and more intense.”

As the coding commenced, many hackers stood out with their innovative ideas for the provided hardware and software packages. Some of the more quirky offerings included a GPS cat-tracking collar that logs a pet’s path remotely, and a sensor that utilizes a person’s blood oxygen levels as a way to control software.

Ultimately, the competition narrowed down to a selection of top-tier entries in each prize category.

A team from UC Irvine won the hardware hack challenge with a 3-D printed prosthetic arm that could be controlled remotely with a hand-held motion sensor. One of its proposed applications included working in hazardous environments to manipulate objects from a safe distance.

A team from UCLA placed in the top five overall by utilizing the Oculus Rift headset to display a 3-D world that transforms city statistics into a bar graph that you can walk around in virtually. The team started off already knowing that they wanted to incorporate the Oculus Rift in their project.

“You get cool stuff and you work backwards from there; you don’t get access to this every day,” said James Vunn, a first-year computer science major at UCLA.

A UCSB team won the FLIR ONE Heat Seeker prize by combining the thermal imaging of the FLIR phone attachment with the standard view from a phone’s camera, producing an unconventional view of the world. According to fourth year physics major Reilly Raab, the team members didn’t know each other before the event and were paired up when they arrived.

Santa Barbara City College’s team Eco Node took the grand prize with their network of solar-powered environmental sensors that alert the user to changes in temperature, air pressure, and water flow in pipes. The project has applications in farming, as well as home use, according to Colin Allen, a second-year computer science major at SBCC.

With a great variety and ingenuity displayed by the competitors,the competition didn’t disappoint. “There were a lot of really impressive hacks,” said co-founder Anshul Jain, a fourth-year computer science major, “I couldn’t be happier with the way it turned out.”

SB Hacks made waves with its scope and execution, and it’s virtually guaranteed that hackathons will be programmed into UCSB’s future.