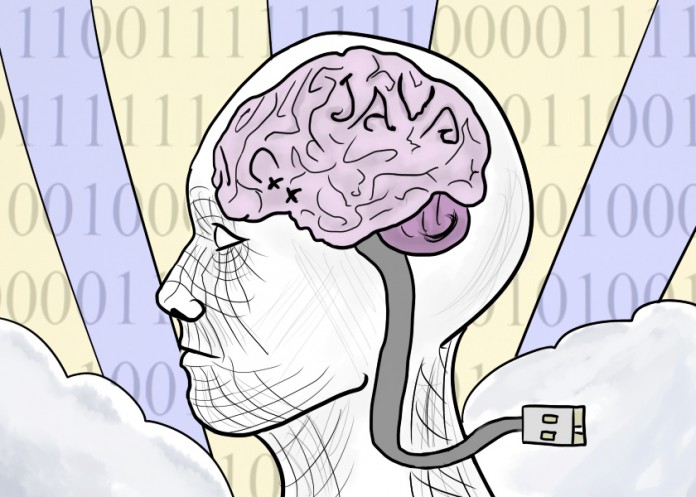 With the year 2015 comes a lot of new technology, as has been the standard for the last few decades. This technology is designed to make our lives easier, but what happens when things go wrong with it?

Coding is important to learn, especially in this generation when technology is rapidly changing from something we’ve created into something that self-creates. Our generation has the potential to steer where technology goes next.

There are several benefits to coding. Learning the language of technology helps build confidence in the technology being used. Many view coding and technology as a scary, impossible-to-navigate plane and are afraid to even attempt it. Very few people use the full functionality of their technology, especially their computers, instead barely scratching the surface of what can be accessed. Learning to code helps open doors to the elusive depths of technology and builds confidence in exploring such depths.

Coding also has the benefit of making life more convenient. Writing simple applications for basic things has the potential to make one’s life infinitely more efficient. For example, there are so many privacy issues with different apps we use on a daily basis and it is difficult to keep track of which apps are allowed to access what information. Knowing coding provided a group the opportunity to write an app called MyPermissions, which keeps track of all of the privacy settings of apps in one, easy to access and understand place.

It is true, however, that technology is moving toward a trend of being self-programming. With this, it could be as easy as telling a computer what application you want and it programming it for you. While this sounds like a rosy prospect, this provides the potential of moving toward a Wall-E-esque future.

In the movie Wall-E, people do not have to do or know anything in order to function from day to day. Technology feeds them, dresses them, and moves them around. Not only does this not sound like a particularly fun future, but there also arises the problem that with no one learning the language of technology, there will be nobody to fix the technology should something go wrong.

There are always issues cropping up with programs and computers that can be easily fixed with coding. While technology is becoming more seamless, there is no way to ensure that technology will never have problems as, again, technology is a human invention and humans are not perfect.

Many programs and systems have what are called software bugs, which are essentially issues with coding or program design. Not all software bugs interfere with the program or system’s functionality, so until the particular piece of code is tested, it may never be known that the bug exists. Once a problem does arise, however, knowing how to code helps the users fix the bug. For instance, a payroll system may work flawlessly for hourly employees. However, once there are salaried employees, a software bug could present itself with how it handles the pay of salaried individuals.

Another problem that could arise is a computer glitch. These are more complicated than software bugs, since they typically correct themselves, making it difficult to figure out what caused the glitch. Having solid knowledge of coding could eliminate some of the difficulty in finding the source of the glitch to rectify it.

If none of this is convincing, there is always the argument that without learning to code, there’s no hope of ever deprogramming the robot overlords that will take over in the future if a band of evil humans gets together to program robots to act as such.

Coding has many benefits, and it is important for our generation and future generations to take advantage of the opportunities that are available on websites such as CodeAcademy. Especially as we move toward a more technology-heavy future, it is even more important to understand the instruments that we live beside.