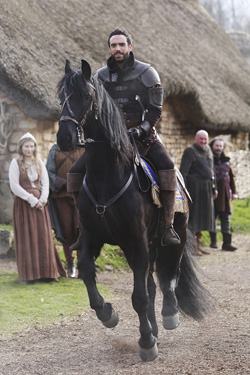 Galavant is not a show for people who dislike musicals. Galavant, however, is a show for people who like comedy, drama, and attractive people with British accents.
The show premiered on Sunday, Jan. 4, with two back-to-back episodes. The first episode begins with a musical number explaining the background of the main character (and titular knight), Galavant, which brings the viewer up to date on all of the goings-on within the show’s world. The song is clever and concise, quickly going through what has happened in Galavant’s life, and giving the viewer the ability to decide if the plot sounds interesting enough to stick around for within the first few minutes.

The plot centers around a knight who had his true love kidnapped from him by the king. When he goes to rescue her, however, she chooses to stay with the king, since the king can provide more financial security for her than he can.

A year later, Galavant is an alcoholic shell of his former self who is sought out by a young princess trying to rescue her parents from the king. He agrees to go on the journey with her to defeat the king, his arch nemesis, after much convincing. His delightfully unintelligent squire goes along for the adventure as well.

While the show is technically a filler show while ABC’s Once Upon a Time is on its mid-season break, the writers of the show gave it their full talent. The dialogue is quick and witty, though sometimes predictable, and there are a few plot holes, especially surrounding Galavant and how he manages to regain his abs after one night of intense training. In general, however, there are many moments that do not turn out the way it seems they would and the jokes are capable of actually making people laugh out loud, which is a rare occurrence on network television these days.

The actors are all quite attractive, with the exception of the king (no offense, Timothy Omundson) and speak with British accents, in true aristocrat fashion. A bonus to all this is the cast can actually act. As cringe-worthy as the preview may have been, the cast pulls off jokes flawlessly and there is very real chemistry between the characters.

While it still remains unclear what the squire’s role in Galavant’s journey will be besides providing the slapstick style humor for the ensemble, Luke Youngblood is still quite enjoyable to watch. An additional bonus of the show is seeing John Stamos, who plays a Galavant’s rival knight, walk around in tights.

The musical numbers are not too frequent throughout the episodes, but when there is one it helps to move the plot forward while providing additional comedy. The singing is decent and the scores sound dramatic.

While Galavant is another story about a ragtag group of people who are on a mission to accomplish a morally righteous task, there is something about singing knights that draws the viewer in and makes the journey feel like one they’ve never seen before. The show seems initially promising and it seems unfortunate that it will only air 8 episodes over 4 weeks for its first season. Galavant is one of those shows that, for weeks to come, will have people saying, “Huh, it’s not bad for a musical.”

To watch Galavant, tune into ABC on Sundays at 8pm.