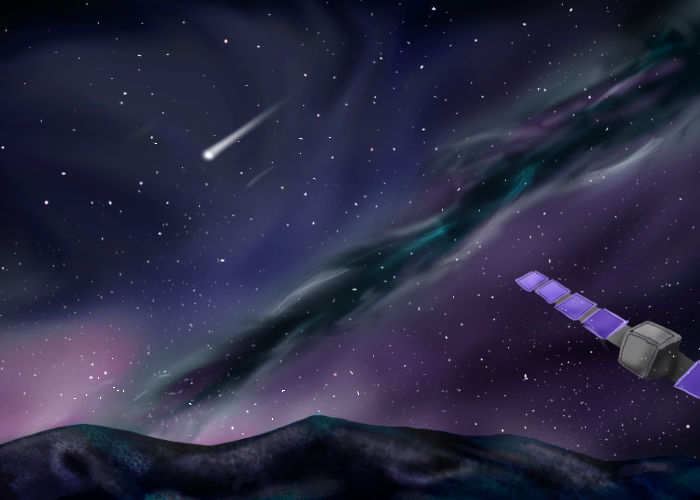 The Rosetta spacecraft successfully deployed its lander, Philae, to Comet 67P/Churyumov-Gerasimenko after a ten year journey spanning 6.4 billion kilometers on Nov. 12. This is a tremendous feat that has been accomplished for the first time in history.

Perhaps one of the greatest challenges was operating Rosetta from Earth—scientists needed to safely land Philae on a rotating comet traveling 40,000 mph.

Agilkia, the landing site, was chosen six weeks before landing, based off of images collected 30-100 kilometers from the comet.

“Our ambitious Rosetta mission has secured a place in the history books: not only is it the first to rendezvous with and orbit a comet, but it is now also the first to deliver a lander to a comet’s surface,” said Jean-Jacques Dordain, the European Space Agency (ESA) Director General.

This has great implications for finding answers to questions that scientists have asked for years.

“Rosetta is trying to answer the very big questions about the history of our Solar System. What were the conditions like at its infancy and how did it evolve? What role did comets play in this evolution? How do comets work?” said Matt Taylor, ESA Rosetta project scientist.

Meanwhile, Philae has successfully collected images and samplings of the comet, showing significant amounts of dust and debris of all sizes. The lander has found organic molecules essential for life on the comet.

“[Philae] was able to ‘sniff’ the atmosphere and detect the first organic molecules after landing. Analysis of the spectra and the identification of the molecules are continuing,” the DLR German Space Centre issued in a statement.

The sample is still being interpreted, but scientists are hoping that the molecules collected will be an important connection to the origins or Earth.

“There has long been indirect evidence of organic molecules on comets as carbon, hydrogen and oxygen atoms have been found in comet dust,” Professor John Zarnecki of Open University and deputy principal investigator on one of Philae’s instruments said, “It has not been possible to see if these are forming complex compounds before and if this is what has been found then it is a tremendous discovery.”

Additionally, Philae has successfully collected images and samplings of the comet, showing significant amounts of dust and debris of all sizes. Unfortunately, the system’s camera technology was developed long before the recent rapid growth in camera technology.

“When the camera was developed 20 years ago, memory cards did not exist,” the German Aerospace Center’s Stefano Mottola. “ROLIS [the camera] therefore has a limited amount of memory—just 16 megabytes, which is one thousandth of the amount of data that can be stored on today’s USB sticks.”

Philae has completed its mission before hibernation. Until there is sufficient sunlight to fall on Philae’s solar panels, there will not be enough power to wake it up.

“We still hope that at a later stage of the mission, perhaps when we are nearer to the Sun, that we might have enough solar illumination to wake up the lander and re-establish communication, ” said Stephan Ulamec, lander manager at the DLR German Aerospace Agency.

In the meantime, Rosetta continues its 30 kilometer orbit around the comet. On Dec. 3, Rosetta will move down to 20 kilometers for 10 days, then will return to 30 kilometers.

“The desire is to place the spacecraft as close as feasible to the comet before the activity becomes too high to maintain closed orbits,” says Laurence O’Rourke at the Rosetta Science Operations Centre near Madrid, Spain, “This 20 kilometer orbit will be used by the science teams to map large parts of the nucleus at high resolution and to collect gas, dust and plasma at increasing activity.”

Rosetta’s mission is far from over. If all goes according to plan, Rosetta will be the first spaceship to experience the development of a comet’s coma. Scientists also plan to travel with the comet towards the sun.

“With lander delivery complete, Rosetta will resume routine science observations and we will transition to the ‘comet escort phase’,” says Flight Director Andrea Accomazzo, “This science-gathering phase will take us into next year as we go with the comet towards the Sun, passing perihelion, or closest approach, on 13 August, at 186 million kilometers from our star.”

Thus far, Rosetta remains in excellent condition, with all parts and systems working as expected.

“It’s been an extremely long and hard journey to reach today’s once-in-a-lifetime event, but it was absolutely worthwhile. We look forward to the continued success of the great scientific endeavor that is the Rosetta mission as it promises to revolutionize our understanding of comets,” said Fred Jansen, ESA Rosetta mission manager.