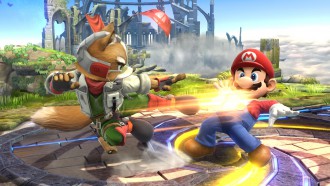 By now, the reviews for the newest installment in the venerable Super Smash Bros. series, Super Smash Bros. for Wii U, have already come in. Unofficially known as Smash 4, the game was released to universally positive reviews, which praised the new gameplay that blended the fast-paced and frenetic action of fan-favorite Super Smash Bros. Melee with the slower Super Smash Bros. Brawl, which many felt was too plodding to capture the same kind of action that made the series a staple in the competitive gaming community. Additionally, the roster received a bump from 39 fighters in Brawl to a 49-character lineup, revamping many of the moves and physics of the Nintendo mascots who returned for this iteration. But while many play Smash for fun, there is dedicated group who play the game at a competitive level, taking each other on head-to-head in tournaments that are viewed by hundreds of thousands online through websites such as Twitch. It’s been almost two weeks since the game’s release, so how has the Smash 4 meta-game fared in its early days?

Competitive Smash Bros. players are well aware of the series’ almost hidden technical nature. When Melee was released, keen players soon realized that there were ways of moving faster and in different ways than the game’s physics would seem to allow. This led to tactics like “L-canceling,” which allowed players to cut down the time it took between a fighter landing on solid ground and being able to input commands, and “directional influence,” or “DI,” which could affect how a character flies through the air after being hit, allowing seasoned players to stay alive longer. This set the competitive players apart from the average player, as performing these techniques took a great deal of precision and practice, and even 13 years after its release, the competitive Melee scene has continued to evolve and attract new combatants.

Smash 4 was made with the intent of bridging this gap, cutting out the needlessly exacting techniques while still allowing room for players to hone their skills and improve. With that as its basic mission statement, the game mostly delivers. Smash 4 is certainly a fair middle ground between Melee and Brawl as far as pacing goes, and it’s clear that the team led by series progenitor Masahiro Sakurai tried their best to give the game its own identity within the series. However, competitive players will notice the continued absence of “L-cancelling” which began with Brawl, and furthermore, the technique of “edge-hogging,” or holding on to the ledge of the stage so players trying to recover after being knocked off are unable to grab on, has also been removed. While “directional influence” still remains a part of the game, these changes have dramatically changed the flow of matches, rewarding strong defensive play and risky, precise off-the-edge maneuvers more than in any other installment. Additionally, it takes much longer to take a stock from an opponent, and as such, the general rules for tournament play give each player two lives, as opposed to four being the standard in Melee and three being standard in Brawl.

Another main selling point of Smash 4 was the promise of solid and stable online play, which was hard to come by in the previous entry, Brawl. Especially notable is the debut of “For Glory” mode, which matches players up one-on-one in two-stock games without items on flat, even battlegrounds without stage hazards. So far, online play has held up reasonably well, though players should expect to encounter mediocre connections and input lag every so often. It’s a nice touch, and “For Glory” takes itself seriously by tracking progress over a player’s online career and assigning global rankings, but it still can’t match local competitive multiplayer. For the exacting Smash player, input lag can be just enough of a hindrance to be discouraging, and tournament-legal stages with platforms are not allowed in this mode, which removes a crucial element from true competitive play. Despite all of this, however, “For Glory” is a welcome addition that proves the development team behind Super Smash Bros. is truly beginning to embrace the series’ role in the competitive gaming community.

There’s still much to be seen out of Super Smash Bros. for Wii U, and until the game has time to stretch its legs or players have the time to learn the boundaries of the gameplay, its true competitive potential will remain unclear. However, it’s undeniable that the Super Smash Bros. team has done their best to create an experience with a unique and balanced feel that’s sure to inspire years of experimentation and evolution. The series has been riding high for more than a decade, and Smash 4 is set to keep that fire burning.