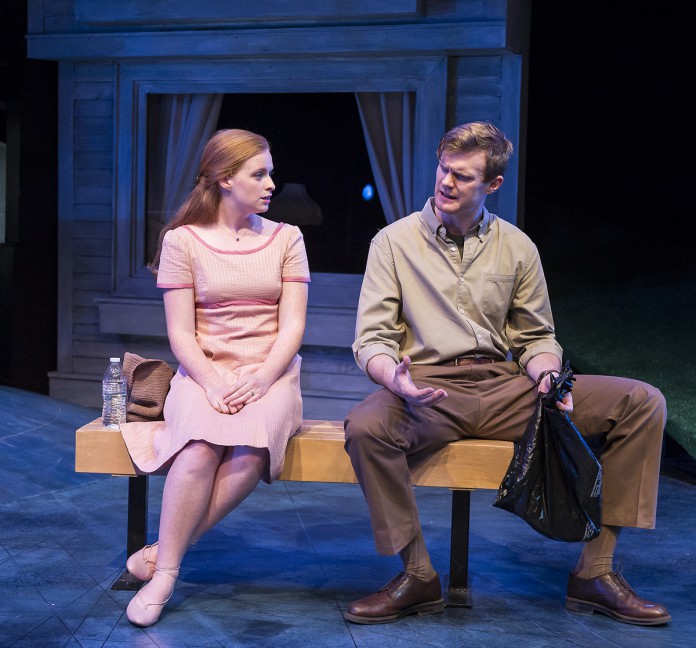 In the past few hours after having seen the University of California, Santa Barbara’s production of Middletown I have felt more alone than I have since junior high. Most theater goers expect to leave a show feeling somewhat uplifted, enlightened, or, in the very least, less alone. This was not my reaction to Will Eno’s Middletown, which is currently being performed at our very own Performing Arts Theater.
The play feels like a less effective rewrite of Thornton Wilder’s Our Town, right down to the replacement of the stage manager with a police man who introduces the audience to the sleepy little town and its simple inhabitants: inhabitants destined to leave this world unnoticed, in much the same lonely state in which they entered it. Each and every line felt chock-full of some depressing reflection on life that felt reminiscent of a cynical college professor, on the brink of retiring, rambling on while students eagerly jot down less than profound points of genius. However, the major difference is that these reflections did not feel like an organic overflow of passion, but rather a calculated and jaded script that was intended to impress audiences.

A set piece just before intermission in which the audience is seen on stage attempting to reflect on the play felt incredibly condescending, carrying the message that we could never understand the true intention of the piece and we are all just regurgitating the knowledge and lines we have gleaned from art. Perhaps it was this moment, the blatant insulting of the audience, which officially soured me to the piece as a whole.

Though each line of the play felt overwrought with reflections about the depressing state of life and the characters’ acceptance of the inevitability of death, the way that the script was embraced and handled on all levels was exceptional. Behind the scenes, Tom Whitaker, Associate Professor of Acting/Directing at UCSB, did a wonderful job as director of the piece. His work was bolstered by the outstanding set design by Greg Mitchell that allowed for versatile locations and multiple scenes to occur silently in the background of the main action. Vickie Scott did a tremendous job of embracing the darkness that the space provided in order to draw audiences out of and back into the action, as well as create a pretty convincing idea of space.

The performances on the part of the students really imbued an otherwise intellectually pandering script with their remarkable naturalness and strength. In particular, Ian Elliot and Quinlan Fitzgerald’s portrayal of two lost souls, John and Mary, in search for some kind of light at the end of the tunnel, proved remarkable. Their sincere portrayal of these two friends sparked a bit of life within the piece that just didn’t feel inherent in the writing. Their laughter and awkward pauses felt natural and drew viewers back into the play that I had checked out of after the first incredibly lengthy introductory piece that managed to stretch a sentence into two minutes.

Other stand out performances included Blythe Foster as the always optimistic librarian, the last standing relic of cheerful optimism in the town. One scene that really seemed to define the piece was her interaction with Craig, played brilliantly by Dillon Francis, a town drunk and one of the most effective narrators in the piece, which got to the heart of lost childhood innocence. The librarian reminds Craig of the poem he had written as a child, his proudest accomplishment and how it had hung in her office for years. This moment was touching as Craig talks about the potential we are all born with, and questions why he ended up such a failure. Perhaps the piece intended to leave audiences with the desire to better themselves and embrace this potential before it is too late, because life moves pretty fast, whether you are ready for it or not.

Overall, though I wasn’t a big fan of the style in which the piece was written, the performances and brilliant execution of some fundamentally impactful moments made this production well worth seeing.