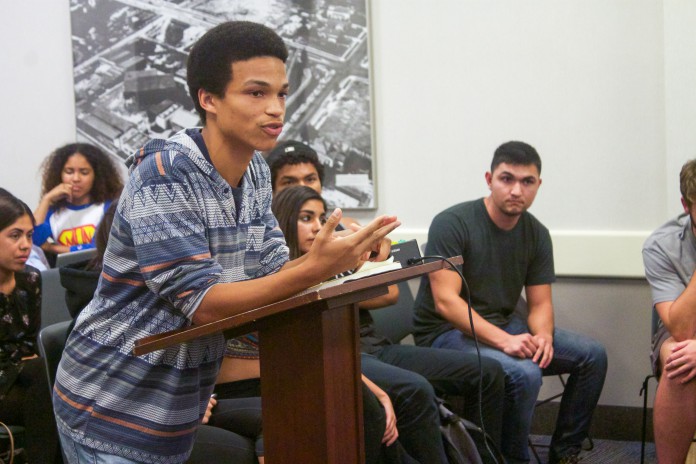 Members of the Student Commission on Racial Equality argued against a bill to update Policy 28: Associated Students Conference and Retreat Policies and Procedures at the Nov. 12 meeting of the AS Senate at the University of California, Santa Barbara.

The bill states that the External Vice President of Statewide Affairs “shall be a designated Conference Lead in charge of overseeing and ensuring UCSB representation at all United States Student Association and University of California Student Association conferences including but not limited to Student Lobby Conference, Legislative Conference, and Student of Color Conference.”

Although the EVPSA at the other UCs holds this role already, UCSB’s current EVPSA Melvin Singh has not taken jurisdiction over the delegation for the Student of Color Conference. Currently, the SOCC delegation selection process has been headed by SCORE.

“SCORE has historically organized the Student of Color Conference delegation,” said SCORE outreach coordinator Allison Bettencourt. “I have pulled binders from the 1990s. SCORE has always organized it. I don’t see a reason for that to change.”

“Our EVPSA may be someone who is white, upper-class, may be homophobic, xenophobic, may not have any opinions that fall in line with the Student of Color Conference,” said Bettencourt. “I feel it’s inappropriate to have the EVPSA organize that when we have the Student Commission on Racial Equality that directly deals with this on a weekly basis and that has existed for many, many years.”

SCORE diversity educator Kyron Covington also spoke during public forum, and in opening his speech he quoted Malcolm X saying, “Only a fool would let his enemy teach his children,” stating that although the members of SCORE are not necessarily Covington’s children, they are the people he serves, and that SOCC is organized by students of color because “we would be fools to do otherwise.”

Additionally, Covington discussed whether partisanship was a factor in the delegation selection process, because many SCORE members have past affiliations with political parties on campus.

“I personally was a volunteer for the DP party last year, and so people thought that I brought that stigma into the space this year and into the discussion process, but I am here to say that that wasn’t the case,” said Covington. “We picked our delegation fairly, based on the criteria.”

Several senators, including On-Campus Senator Matthew Santos and Off-Campus Senator Brandon Lee, attempted to compromise with Bettencourt and Covington regarding the language of the bill, but both SCORE members stated that they would prefer to have the bill withdrawn rather than rewritten, stating that they would be willing to discuss the matter at a later date.

The Bill to Update Policy 28 was discussed at the Nov. 13 meeting of the AS External Affairs Committee. They proposed amendments for the bill and will be communicating with SCORE, as well as AS Lobby Corps, to make sure the amendments are agreeable to both parties.