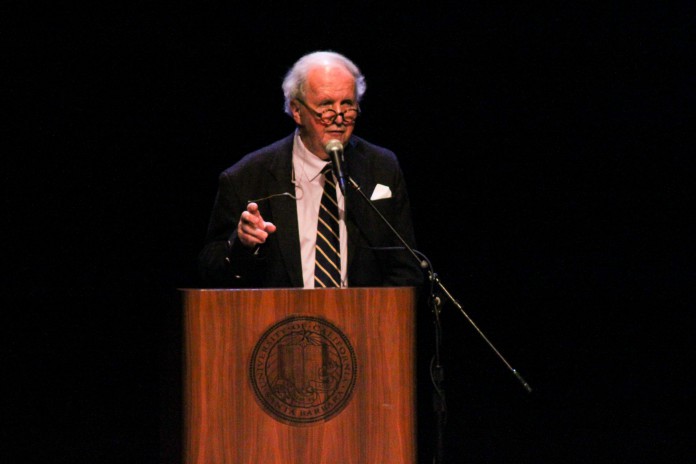 Prolific British writer Alexander McCall Smith walked onto the stage of Campbell Hall on Friday, Nov. 14, to a packed audience. The cheers and applause only grew louder when they realized that the internationally acclaimed author was wearing a traditional Scottish kilt.

An Evening with Alexander McCall Smith was put on by the University of California, Santa Barbara Arts & Lectures, inviting students and residents of the greater Santa Barbara area to join McCall Smith in a night of laughter and discussion. The talk about “the very small things of life,” as McCall Smith put it, encompassed some of his experiences traveling and time spent working on his novels.

Throughout the night, the self-proclaimed serial novelist recapped a number of anecdotes, all met with laughter from the audience, appearing more like stand-up comedy and improv than a distinguished professor and author speaking. His stories ranged from the differences in etiquette in the United States and United Kingdom to his experiences visiting and speaking in California. “I’ve been to California on a number of occasions, and I’ve realized that in California, when you meet people for the first time you tell them your problems,” joked McCall Smith. “And this is something that you do. And then you reply by telling the other person your own. This is something I’ve seen in California only.”

To conclude his hour-long lecture, McCall Smith withdrew a piece of paper from his pocket, unfolding it and peering out at the audience over his spectacles. Normally, he concludes his lectures reading poems penned by another author, but the audience was treated to a poem he wrote earlier that afternoon, showing off his quirky sense of humor and observant nature.

“I was traveling by car to Santa Barbara today and reflecting on the landscape when it passed me, and I saw a sign which made me think. I wrote a poem sitting there in the car, which I’d like to read to you,” the writer said. “There was this sign that said ‘College of Hypnotherapy, next right.’ Now that was a wonderful sign, and you must, at all costs, preserve that sign. If the College of Hypnotherapy were to close tomorrow, you must tell the local conservation society that that sign must remain.” The poem was aptly named “College of Hypnotherapy, Next Right.”

Writing with wit on the spot comes easily to him, as shown in how quickly he penned the poem and his works. McCall Smith has written over 100 novels, including the internationally bestselling series The No. 1 Ladies’ Detective Agency, 44 Scotland Street, and The Sunday Philosophy Club. In addition to writing mystery and crime novels (although he vehemently denies being a crime novelist), McCall Smith also writes children’s books and academic texts. The author recently released his latest installments The No. 1 Ladies’ Detective Agency and The Handsome Man’s Deluxe Cafe, and he is slated to release a modern rework of Jane Austen’s Emma in 2015.