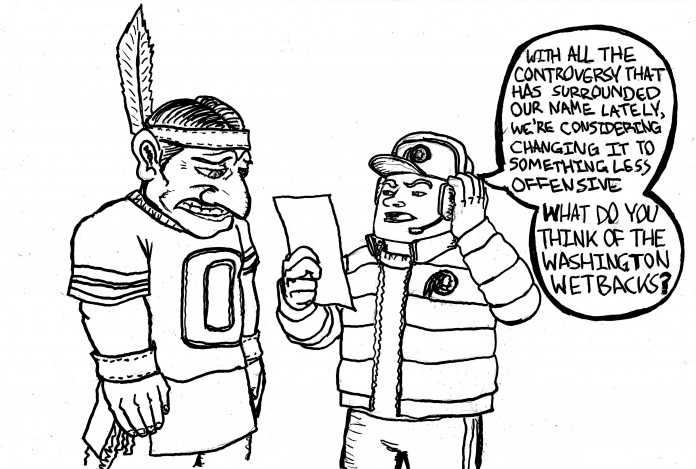 From the Journal of John Isaac Cornwell, Jr.

“I write this in a time of great peril; our journey has been temporarily slowed, and I fear we may never start again. We are currently surrounded. Our team buses have now circled the wagons in an attempt to protect ourselves from this approaching hoard. Our convoy has been flanked by a hoard of social justice savages, seemingly hell-bent on unleashing an onslaught of Twitter arrows and verbal spears intended to amplify a fairly recent controversy. And here I am, huddled on the floor of my team bus, writing by candlelight, and leaning against a 350-pound right tackle out of Oklahoma named Trent…

“But before we get into any rumblings of controversy, gather ‘round folks, and let me tell you a tale of a football team.  The Washington Redskins are an NFL team with a proud tradition, home to such football icons as Slingin’ Sammy Baugh, John Riggins, and Joe Gibbs. A team that had Doug Williams, who became the first African-American quarterback to win the Super Bowl in 1988. A team with uhh…Kai Forbath?

“Well, we’re not quite as proud anymore, but still, we’re an NFL football team, dagnabbit! Now, here we are stuck in the middle of a 3-6 season with a quarterback more beaten down than the sidewalk out front of Belle’s Brothel out in Silver Springs, a run game that has yet to hit the ol’ dusty trail, and a coach who is playing Butch Cassidy’s younger brother Stephen to his better, and more famous brother.

“But while these on-field struggles may be akin to trying to ford your Conestoga across the Platte, our biggest hurdle seems to be of the onomastical variety (that’s the study of names for all you folks lacking in book learnin’). The name which we have used for decades is now under fire, by those who can’t seem to separate a team name from some made up injustice du jour. If you’re a fan of irony, it’s us Redskins who are now under attack.

“I may be biased because I am a player for the team (yes, the backup punter is a player!), and I’m not some big city vegan mixologist like those causing the fuss or nothin’, but I believe when most people hear the word “Redskins,” they don’t think racial slur, they think about a football team. In a 2010 psychological study commissioned by the University of Missouri, it was found that ‘only one participant explained the accurate meaning of the term “Redskin” [referring to a derogatory slur for a Native American] out of 300 surveyed.’ But, I am one to refute that data and say that, I would imagine roughly 299 gave the accurate meaning of the term: an NFL player.

“Currently, teams with such ethnically-based nicknames such as the Indians, Braves, Fightin’ Irish, Canucks, and Ragin’ Cajuns grace our sports pages every day, but they continue to function with little public outcry. Why the ‘Skins don’t get this treatment is beyond me.

“This is really the heart of the issue: is the word ‘redskin’ offensive, or has it gone beyond its extremely antiquated origins to just mean a team moniker? The University of Notre Dame proudly uses its moniker, and can you really argue that “Redskins” is so much more offensive than “Fightin’ Irish”? The term ‘redskin’, which the protestors consider a contemporary racial slur, hasn’t even been heard in these here parts since 1859! Even with all this current upset, a recent poll found that only 18% of responders feel that the name ‘Redskin’ is offensive to Native Americans, and even less support changing the team name. Because the football team in Washington is what ‘Redskins’ means today.

“But, for some reason, it is this minority who shout the loudest. While our country remains at war in the Middle East, the poverty gap gets wider by the day, and the same politicians stay in office, no matter what they do, the people who shout about the Redskins’ name continue to shout about the Redskins’ name. Let’s all just leave the Redskins alone; there are much more important things to get all hot and bothered about. Sometimes we just have to face the facts that this overly-sensitive, white guilt-fueled pity and anger is not the same as actual progress. And changing a team’s name is not a form of reparation.

“At least I can take solace in the fact that I believe soon enough these so-called passionate people, who consider themselves so offended by the name, will move on to the next ‘injustice’ to feel high and mighty about, and we will hopefully be hearing “Hail to the Redskins” at NFL games for years to come.”