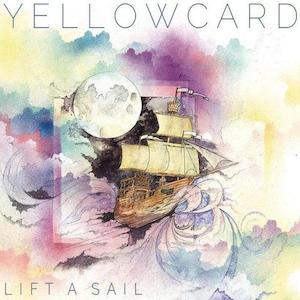 Do you remember Yellowcard? You know, the pop-punk band with the violin? Well, it’s been so long since they’ve had a big hit that there is a definite possibility that nobody does. But, what I’m sure is news to almost everyone except their most devoted fans is on Oct. 7, 2014, Yellowcard dropped their latest album Lift a Sail. This latest release is Yellowcard’s ninth album since their debut in 1997, and though their sound has changed tremendously, it has been for the better.
Since 2012, the band has undergone a tremendous amount of struggles, both personally and musically, but has overcome all of them to create this most recent release. In the past couple years, Yellowcard’s signature violinist, Sean Mackin, was diagnosed with and is still recovering from thyroid cancer; the wife of lead vocalist, Ryan Key, suffered paralyzing injuries from a snowboarding accident; and drummer, Longineu “LP” Parsons, left the band. Despite (or maybe because of) these obstacles, Yellowcard has truly grown as a band, and Lift a Sail proves that their music should be as relevant as ever.

The album begins with “Convocation,” an instrumental introduction filled with that familiar sound of the violin that is reminiscent of the band’s first concept album, Lights and Sounds. This track does not lead quite as seamlessly into the next one, “Transmission Home,” as it should have, but this is still a good start to the album. It carries a lot of the style of their most popular album, Ocean Avenue, and brings with it a powerful, uplifting tone.

The three singles “Crash the Gates,” “Make Me So,” and “One Bedroom” follow. These tracks are calmer than what has been heard from the group in the past, but not any less catchy. “One Bedroom” has a slightly poppier feel and a steady back beat, but their lyrics are touching and clearly significant.

The ballad-like tracks of the rest of the album, such as “Fragile and Dear,” “Madrid,” and “MSK” remind the listeners of the constant struggle the band has gone through. If you liked “Ten” from their 2012 release Southern Air, you are sure to enjoy these songs. “Fragile and Dear” expresses sentiments of loss and acceptance, perhaps referring to the departure of their band mate. “Madrid” is a short, but beautifully written song about Ryan Key’s wife that pulls heart strings in only two minutes and eight seconds.

“Illuminate,” “The Deepest Well,” and the title track “Lift a Sail” truly show the band’s determination to overcome the obstacles they have faced in the past. “The Deepest Well” brings back a slightly more punk sound with vocals from Memphis Mayfire’s vocalist, Matty Mullins, whom they are currently on tour with. The title track “Lift a Sail” is, like the name suggests, uplifting and has a fantastic message of resilience and strength. If you are only going to listen to one song from the album, it should be this one.
The final two tracks are arguably the most powerful of the album. “My Mountain” and “California” are both commanding songs. They feature very reminiscent lyrics, and a tone that conveys the meaning and importance of the song, and what the band is trying to accomplish.

Though woven with notes of grief and tragedy, Yellowcard’s latest release is a well-executed and beautiful album. “Beautiful” may not necessarily be an adjective associated with a “pop-punk” band, but in this case, it is entirely accurate. Yellowcard’s Lift a Sail shows its listeners the band’s deeper side while still remaining true to their roots.