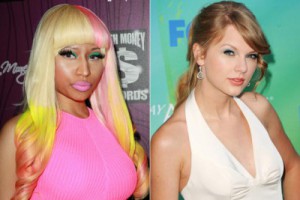 This summer, we saw Miley Cyrus put on a prosthetic black rear in concert, Taylor Swift attempt to twerk in the music video for “Shake It Off,” and Nicki Minaj’s major butt-fest in her “Anaconda” music video. The difference between these three posterior presentations is that two use their whiteness to exploit the hypersexuality of black bodies, and the other reverses sexist and racist tropes to reclaim her skin color and sexuality. Not to mention that Cyrus and Swift generally look like fools trying to do what Minaj turns into a work of art.

With their actions, Cyrus and Swift prove that it is possible for certain types of pop culture and music to be inherently racist. By donning a fake butt (one distinctly darker than her own skin color) Cyrus puts on modern blackface. As a wealthy white woman, Cyrus can put on a plastic, black butt, stick her tongue out, have a laugh, and then take it off when she’s bored with it. Essentially, she takes a part of the black female body that she finds appealing and fun for her, without taking on any of the systemic prejudice that comes with blackness. And this is a textbook example of cultural appropriation. Unlike real black women, Cyrus does not need to worry about the discrimination, stereotypes, or objectifications that come with their racial identity. Cyrus’s actions are even more problematic considering she is a white “Southern belle”—as she refers to herself in her song “Do My Thang”—which calls attention to the fact that she’s hypersexualizing black bodies.

Swift’s performance and objectification of black bodies in “Shake It Off” is problematic as well. Her music video features close-up shots of a woman of color twerking, then a line of women twerking in a row—alternating black and white women in the line (for the appearance of ‘equality,’ maybe?)—while Swift crawls under their legs. In her video, Swift uses African-American anatomy as props, much like Cyrus does in her performances.

Swift’s cultural appropriation in this video is also evident in her own attempts to twerk. The video shows her with her mouth hanging open and pointing at her butt, as if to say that she’s doing something scandalous; this shows how she’s using hip hop and black culture to sexualize herself and give her an edgier personality, without taking on the stigma that comes with it. Yeah, “the haters gonna hate hate hate hate” on this display of cultural appropriation. I just hope she doesn’t “shake off” legitimate criticism on getting called out for being racist.

In contrast to Cyrus’s and Swift’s objectification and hypersexualization of female black bodies, Minaj and her backup dancers work to reclaim their bodies and empower themselves with their sexuality. Minaj takes the trope of hypersexualizing black women’s bodies, uses one of the most infamous songs that objectifies said bodies (Sir Mix-a-lot’s “Baby Got Back”) and turns it around to show that women can gain agency from their sexuality.

In “Anaconda,” Minaj raps about having sex with men she finds desirable, who appreciate her body, and how she also can get them to buy her all the designer clothes she wants. Despite the fact that this may be seen as degrading by some, a focal point of feminism is concerned with the woman’s ability to have as much sex as she wants, as long as it is on her terms. Minaj shows that she is always in control of her own body, so it is a mutually beneficial situation for Minaj and her partners.

The music video for “Anaconda” also shows Minaj giving the rapper Drake a lap dance, but she makes it clear that this performance is not about her submitting to the male gaze; she does it for her own enjoyment. At one point, Minaj slaps his hand away when he tries to touch her, then walks away when she wants to, leaving him behind. The difference between Minaj’s performance and those of Cyrus and Swift is that Minaj works within her own race and sexuality to empower herself against systemic prejudice, while Cyrus and Swift attempt to borrow a stereotypical image of a culture that they don’t belong to and use it for their own gains, without ever being able to understand the struggles that come with it.