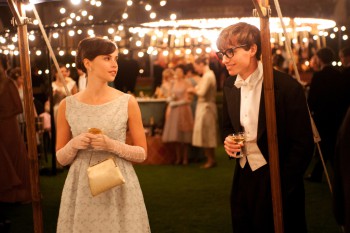 Making a biopic is, if nothing else, a risky endeavor; an attempt to capture the life of a notable name can result in disaster if the effort is uninspired. Thus, a well-made biographical film needs to be accurate enough to earn validity, but avoid drying itself out with exposition, because nobody wants to watch a Wikipedia article. Audiences enter these movies expecting to see the story of an extraordinary human being that they can relate to, love, and be personally familiar with by the film’s end.

The Theory of Everything, which premieres on November 7th, is the next feature film to take on the challenge, this time telling the story of the life of renowned cosmologist Stephen Hawking. While it remains to be seen if the film has met the aforementioned expectation, students at UCSB will have an opportunity to make the determination for themselves. The Department of Film and Media Studies and Carsey-Wolf Center’s “Script-to-Screen” series will be screening the film on Tuesday, Nov. 4 at 7 p.m, at Pollock Theater. The screening will be followed by a question-and-answer session with screenwriter and producer Anthony McCarten, as well as producer Lisa Bruce.

The rich life of Stephen Hawking could warrant multiple movies, with each centered around a different aspect of his brilliant life. In The Theory of Everything, Anthony McCarten has chosen to focus on the romantic portions of Hawking’s life, particularly on his relationship with Jane Hawking. Their shared love, combined with his subsequent diagnosis with Amyotrophic Lateral Sclerosis (ALS) and the enormous success of his career in theoretical physics and cosmology, will undoubtedly provide enough story for a thought-provoking film. At the same time, however, the project may be a sizable undertaking for McCarten, who is relatively inexperienced in writing for the movie screen. He adapted his own novel, Death of a Superhero, for an Irish film released in 2011, but besides this project, he has merely dabbled in screenwriting throughout his career. The Theory of Everything will then likely serve as a future litmus test for his credibility in the competitive world of screenwriting. As McCarten is a bit of a mystery, the Q&A session should be a fruitful opportunity for him to provide insight into his ambition, and creative process as a writer. Producer Lisa Bruce has had a similarly obscure career, having produced some big-budget films like 2011’s No Strings Attached, but hasn’t had many major credits. While the lack of big-budget and popular distinction in both McCarten’s and Bruce’s portfolios should not serve as an indicator of their respective abilities, The Theory of Everything will be that much more instrumental in influencing their reputations in the future.

The “Script-to-Screen” series at UCSB, hosted and produced by Pollock Theater director Matt Ryan, provides audiences with an opportunity to gain insight into the creative process that most screenwriters utilize when developing a story for a feature film. Fans of Stephen Hawking and film enthusiasts alike should thus find the November 4th screening of The Theory of Everything, as well as the Q&A session that follows it, nearly as compelling as Hawking himself.