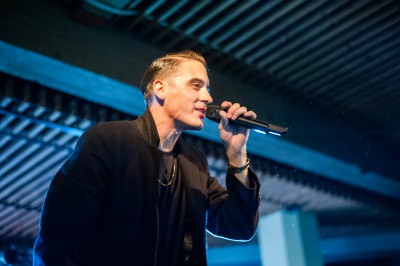 A.S. Program Board hosted a sold-out concert featuring rapper G-Eazy on Oct. 24 at The Hub, which showcased the artist’s Bay Area rap revival and the inextinguishable spirit of the hyphy movement.

G-Eazy hails from Oakland, CA, where Bay Area rap legends such as Mac Dre and Keak da Sneak first unleashed the hyphy, or “hyperactive,” music and culture movement more than 20 years ago. The phenomenon that they created has since been reinvigorated by the modernization that G-Eazy’s musical style represents. The concert comes four months after the release of G-Eazy’s debut studio album These Things Happen, which reached peak spots on multiple charts, including the Billboard 200.

Doors opened at The Hub at 8:30 p.m., but the line that snaked well beyond its entrance took nearly an hour to subside. Each concertgoer was frisked at the door and the notable security presence, which included both police officers and CSO’s, ultimately ensured a safe experience. Officer Tyler Oldread commented that “there’s always people that party too hard [and] we don’t want them to be a danger to themselves, to you, or anyone else.”

The show kicked off with a tremendous opening set from Bay Area rapper Jay Ant. His performance of “Circle” was a notable standout. Nate Davison, a visiting student from S.F. State, commented that “this guy [Ant] is killing it. He’s getting a really loud crowd response. He’s dope.” The dopeness factor was undeniable, and the audience never hesitated to throw up their hands or shout along to the lyrics.

The sound quality throughout the show was stellar despite the smaller size of the venue and its unconventional arrangement of pillars, booth seating, and stone walls. In terms of audio, there was no bad place to settle in and turn up. The P.A. stacks released the kind of bass that makes you hate your neighbors while leaving the vocals undisturbed, and both Jay Ant and G-Eazy took advantage of this to great effect.

Following the incredibly successful set of Jay Ant, headliner G-Eazy flew on stage with flailing limbs, performing “Downtown Love.” Every phone in the Hub lit up as the audience streamed SnapChats of the spectacle to their envious friends. The production quality of the performance, with its impressive L.E.D. screen and swooping lights, nearly outshone G-Eazy himself, but the magnetism of his persona balanced out the rivalry.

Ultimately, the visuals of the show couldn’t compete with the well-practiced and tight flow of G-Eazy himself, and his performance of “Let’s Get Lost” proved that. All hands were up in a uniform and pendulous sway to the melancholic yet seductive jam.

The artist’s burgeoning catalog was sifted through until the very last encore performance of “Loaded” that sealed the entirety of the experience in a semi-ironic package of booty shaking character. Sahil Bissessur, a third-year computer engineering major, commented that “it was a fantastic concert [with] great preparation in mind.”

G-Eazy’s modern mix of hyphy roots and party culture shone out to the crowd like a Bay Area beacon when he stated that “I heard this is a party school [and] they got some bad bitches.” The emphatic response from the crowd thundered out as a shrill affirmation of the night’s fulfilled expectations.