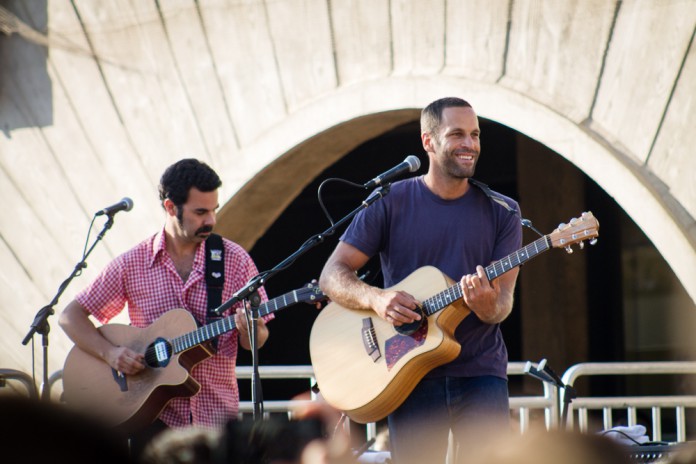 Variations of the same message flew through cell phones around campus and Isla Vista last Wednesday afternoon, such as, “I’m not sure if this is true, but I heard Jack Johnson is playing at Storke at 3:45.”

As the day progressed, this speculation gained pace as a soundstage was erected below Storke Tower and guitars and a ukulele were spotted in front of the KCSB offices.  Around three, students, faculty, and community members began to form a crowd in Storke Plaza that crawled up the stairs, overlooked the balconies, and even filled the windows of Storke Tower.

In support of a celebration of life and a moment of remembrance, the community came together not only for good tunes, but also for solidarity in an event put on by Associated Students Program Board entitled  “Come Together: Remember, Reconnect, and Unite.” A quiet breeze swept over the thousands of hopeful heads gathered at the University California, Santa Barbara.

As the crowd awaited the headliner, they were entertained by performances by Naked Voices, Intervals, Brothers From Other Mothers, and Vocal Motion. Vocal Motion’s rendition of Florence and the Machine’s “Shake it Off,” the same song that they performed at the memorial for the May tragedy, brought everyone together once again for a moment of healing and remembrance.

Ali Guthy, UCSB’s AS president, soon took the stage. First, she asked for a moment of silence to remember and honor those who were victimized and injured in the May 23 tragedy.

She looked upon the familiar crowd, which was now filling every inch of the plaza, and reminded everyone that barely a few months earlier, “We came together to love and support one another, through such magical events as the candle light vigil and memorial walk” which also began in Storke Plaza. Next, she said that the day was “to remember and celebrate the good that we have done in the face of adversity.”

Following Guthy, Vice Chancellor Michael Young said to the those that gathered before him, “You, UCSB students can change this community for the better… you, UCSB students, can fix what is broken in our community.”

With that, AS Program Board welcomed UCSB’s much-loved alumni Jack Johnson to the stage, along with the Animal Liberation Orchestra (ALO), artists whose roots can be traced back to UCSB and the densely packed streets of Isla Vista. Over an eruptive applause, Johnson and the band opened with “Good People.”

The musicians said that, in their excitement to perform, they planned a long set list and chose a lineup based on positive vibes and good times. Johnson and members of ALO met through Isla Vista’s music scene in the ‘90s, and since then they have stayed in touch, performing together on tour numerous times.

Drinking out of coffee mugs, Johnson and Zach Gill, a Goleta local and the keyboardist and vocalist for ALO, bantered back and forth with UCSB throwback stories.

During his performance of “Do You Remember,” Johnson admitted that when he locked his bike to his crush’s bike outside of IV Theater, she thought he was a “creepy guy hiding in the bushes.” The two met 21 years ago and have been married for 14 years. As he sang the lyrics, “Do you remember when we first moved in together? The piano took up the living room,” he added that the house to which he refers is on Trigo.

He also shared that he turned in the original version of “Inaudible Melodies” as a plea for an essay extension in Professor Edward Branigan’s film and media studies class. Johnson sang his original film-related chorus, singing, “Slow down Bruce [Lee], you’re moving too fast, frames can’t catch you when you’re moving like that.”

During “Bubbly Toes,” there was a cheerful murmur in the crowd when Johnson mentioned the dining commons De La Guerra, better known as DLG.

Johnson and ALO combined songs in several unique mash-ups and Johnson provided back up vocals for ALO’s well-known song “Lay You Down.” Gill wrote the song about his wife, who he met during his last year at UCSB.

Another memorable moment towards the end of the performance was when Dan “Lebo” Lebowitz mounted the amp for a guitar solo. The musicians ended with “Better Together” and Gauchos enthusiastically applauded the musicians as they left the stage. The crowd bid them farewell with the well-known “Ole” chant.

Some who have seen Johnson perform live before described this performance as even more unique and special. Fourth-year environmental studies and global studies double major, Margaret Gallagher said, “I feel like this performance was a lot more personal because he [Johnson] was explaining a lot of meaning behind the songs, and they all grew up here.”

To have such admired and respected musicians stand with their fellow gauchos created an atmosphere of solidarity and strength. Like the candles that lit up Storke Plaza several months earlier, thousands of smiles shined brightly that afternoon.