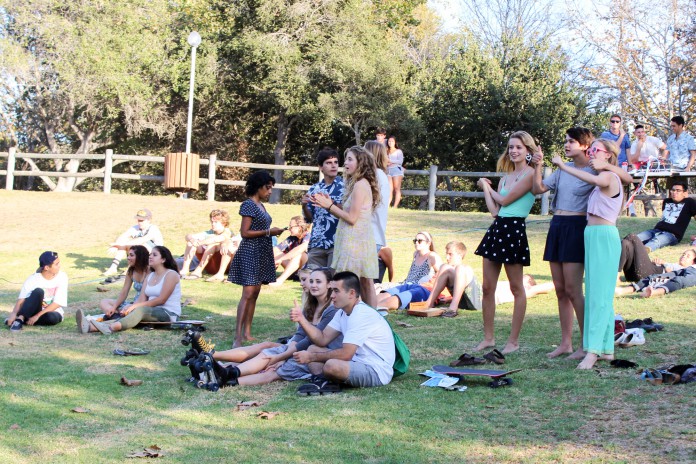 Sunny and seventy five degrees, hundreds of Isla Vista residents, college students, and members of the community gathered together at eight different parks to enjoy an afternoon of games, food, and music. Hosted by Isla Vista Recreation & Parks District, Meet Your Neighbors Day started at 1p.m. on Saturday, Oct. 18 and was quite a success, bringing a sense of what many believe to be the epitome of IV: community.

Which street or block you lived on in IV or which University of California, Santa Barbara student housing you lived in determined which of the smaller parks you were assigned to. For example, if you lived on the 66 to 68 block of Del Playa, you were assigned to El Descandero Park. From 4 to 6pm, everyone at these smaller parks reconvened at Anisq’Oyo’ Park. Activities such as face-painting, henna, corn toss games, juggling, football, frisbee, bounce houses, and arts and crafts were amidst the crowds, as well as live music by local artists and food ranging from pizza to BBQ. The turnout at the smaller parks, such as Sea Lookout and Pelican Park, dwindled by 2 to 3p.m., but by 3:30p.m. Anisq’Oyo’ was packed with face-painted smiles and dancing community members.

Greek Park, one of the smaller gatherings, consisted of more than just Greek members. Derek Wakefield, a third-year political science major, said he met numerous people from the Office of Student Life and the Manley Co-op, and said he also spoke with two Sweden exchange students.

Jael Trindade, a first-year bio-psychology major who lives on campus, said she came out to meet new faces in the community and to love them. “I’m here because I want to share the love… it’s all about the love,” she says. Trindade describes her first year experience as finding her “new family” here at UCSB and IV.

The event took place with a beautiful backdrop, in the heart of a city nestled between the Santa Ynez Mountains and Pacific Ocean. Isabella Nelson, a freshman at Santa Barbara City College said, “the event has more of a homie feeling. People think of IV as a crazy party college city,” said Nelson. “It’s nice to do something more sober during the day.”

“Events such as the Pardall carnival and Meet Your Neighbors Day are great for organizations to table and get involved with the community, and not just UCSB students,” said Bradley Whittaker, a second-year psychology major and resident of Goleta. He mentioned that students who live in Goleta and Santa Barbara sometimes have a difficult time commuting and getting further involved. However, the open atmosphere of unity, solidarity and positive spirit provided a platform where people of all backgrounds could join together.

In addition to UCSB students, MYND was for the whole community, which includes SBCC students and families living in the vicinity. Jeff Bessmer, a resident of IV living in the co-ops, said he was taking time off to join the festivities with Kim Asbury, a fourth-year environmental studies major at UCSB. “We wanted to get more involved and meet new people,” says Ashbury. Living in the co-ops, similar to freshman living on campus, can be somewhat of an isolated community in itself, they mention, and they wanted to take time to get to know their neighbors.

MYND couldn’t be possible without the help of local businesses, restaurants, and organizations on and off campus. UCSB’s close neighbor, SBCC, was an especially vital event sponsor and attracted many SBCC students to participate in their community. General Manager of IV Parks & Recs Rodney Gould said SBCC donated $5,000, and the Office of Student Life donated $1,000. Other sponsors, such as student organizations After Dark and Community Grants, donated $500.

Additionally, Gould said that the Isla Vista Food Co-op was instrumental in the facilitation, purchasing, and distribution of the produce available at the parks.

From children and families to college students alike, the community of IV thrived in unity and compassion, and so it hopefully will for many days to come.  The event allowed people to come out and unite under the sun of our beautiful ocean side paradise.