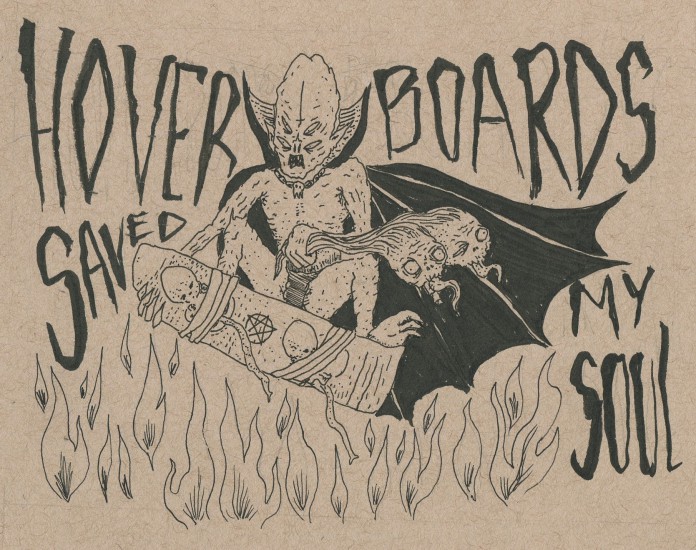 Back to the Future II was right: hoverboards will become a reality in 2015, and it’s all thanks to the Kickstarter of some dedicated developers.

The Los Gatos-based tech company Arx Pax is the company behind Hendo Hover, the hoverboard project posted on Kickstarter on Oct. 14. Since then, Hendo Hover has already reached and surpassed its pledge goal of $250,000. The grand prizes–ten new hoverboards–have already been claimed by ten sponsors who donated $10,000 to the project.

The official Hendo hoverboard is slated for release on Oct. 21, 2015, paying homage to the day that Marty McFly from Back to the Future II arrives in the future.

Currently, the Hendo hoverboard weighs 90 pounds and can hover 300 pounds up to an inch off the ground. Developers hope to create and publicly release a model that can lift up to 500 pounds.

“Imagine a vehicle with all the freedom of a car and all the efficiency of a high-speed train,” said Jill Henderson, co-founder of Hendo Hover. “With our hover engines, that is now possible.”

Hoverboards are intended to be self-propelled, where the rider’s body movements control the board’s movements. Additionally, a safety switch is located on the bottom of the board, allowing the rider to entirely power down the hoverboard.

CEO and co-founder Greg Henderson invented and patented magnetic engines known as Magnetic Field Architecture (MFA) in 2012. MFA is similar to the Maglev technology used in high-speed magnetic trains, which was implemented in certain parts of China and Japan in 2004 and 2005 respectively.

The hoverboards work by attaching circular “hover engines” to the bottom of the board, which generate a magnetic field. The resulting magnetic field repels against the floor, causing the board to lift up. However, the hoverboards are limited to electromagnetic surfaces, despite breakthroughs in research.

“During our research, we discovered a way to transmit electromagnetic technology that is far more efficient than anything else,” said Henderson. “This means that our patent-pending Hendo Hover Engine technology can enable platforms to hover over non-ferrous materials with payloads of virtually any size and weight.”

Developers are still working to make this a reality. However, there are issues with the prototype board movements; the boards currently drift across an electromagnetic surface and riders must push off the ground as if skateboarding. Hendo Hover is currently striving towards a self-propelling hoverboard.

Hendo Hover is also offering a compact cube known as the Whitebox Developer Kit for $299, and the Whitebox+ for $699. The developer kit allows consumers to experiment with hover technology by using the provided hover engines to hover the Whitebox over any surface. The Whitebox+ includes the engine, and adds control capabilities to the kit with a smartphone app in development called the G-Ray.

The development of hoverboards could lead to improved earthquake-proof technology. Arx Pax is a company working on making technology that can stabilize homes during natural disasters such as earthquakes and floods. If the technology can lift homes and other buildings up, then in the case of a natural disaster, death tolls and financial costs would be lowered as a result of this potential safety technology.

“I’m an architect, not a scientist,” said Henderson. “The idea came from being able to levitate buildings out of earthquakes. All of the patents I was looking at were for moving objects. So I asked, why is that? If I can levitate a train, why not a house? We want to use the Hendo hoverboard and hover engines as a way to capture attention and bring attention to an important topic. Our responsibility is to help figure out a better way to build.”

In the meantime, hoverboard technology will continue to improve. The Hendo team is currently on their 18th prototype, and many more are to come before the hoverboard is officially released this time next year.

“It is still early days, but we are absolutely thrilled because we have proven conclusively that what was widely considered impossible is, in fact, possible,” said Henderson.