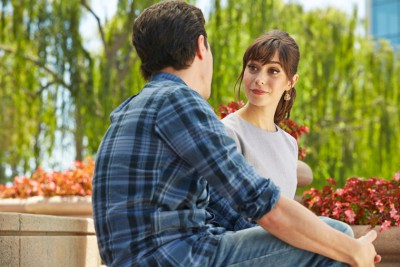 Fall pilot season is one of the great crapshoots in the entertainment industry; big-budget, summer superhero movies will always be popular, and some incarnation of “Law & Order” will forever grace our television screens–but at this time of the year, countless new shows will premiere, and many of these will not stick around very long. Every show on TV begins as a pilot, and while some become immediate and transcendent hits (“Lost,” “Survivor,” etc.), some take a little time to get their footing (the initially disappointing “Parks and Recreation,” for example), and many others never even get out of the first month (does anyone remember “Viva Laughlin?”). As many of us are college students, I would imagine most have little time and energy to waste on a less than enjoyable show. With that in mind, we asked a few of our writers at The Bottom Line to check out some of the more interesting pilots.

“A to Z”
Karen Hamada

I have always found the beginning of fall to be somewhat bittersweet; the bitterness stemming from the start of classes and the piles of reading that come with it, but, much like the cinnamon that rounds out the sharpness of the ginger in a good pumpkin spice latte, October also brings the start of the fall television season that somewhat helps to make up for the end of summer vacation. This time not only brings back multiple old favorites, but also introduces countless new shows. One of the many new shows that caught my attention is NBC’s “A to Z,” starring Cristin Milioti (“How I Met Your Mother”) and Ben Feldman (“Mad Men”).

As a relationship-based sitcom, A to Z not only drew me in with the witty conversations between the leading characters Andrew and Zelda, but also with the question of why Andrew and Zelda will date, in the words of the omniscient narrator, “for eight months, three weeks, five days, and one hour.” As the title cleverly suggests and the quirky narration reaffirms, A to Z offers a “comprehensive account of their relationship. From A to Z.” Throughout the pilot, the awkward nature of Andrew reels the audience in as he tries (sometimes a little too hard) to win over Zelda.

Although certain points of the pilot episode may come across as cheesy, with talks about destiny and a clichéd first kiss, the chemistry between the two leads more than makes up for these. For those looking for a light-hearted and easy to watch show, I’d say that A to Z is definitely one to watch!

“How To Get Away With Murder”
Remle Scott

Creator and executive producer Shonda Rhimes takes her murderous creativity from the nation’s capital in “Scandal” to the classroom in “How to Get Away with Murder.” Once again, a career in the field of criminal law is depicted as the dream job of the century. Much like the shows “Grey’s Anatomy” and “NCIS:(enter location here),” “How to Get Away with Murder” romanticizes now almost clichéd vignettes of infidelity, passion, and greed. Annalise Keating, played by Viola Davis (“The Help,” “Ender’s Game”), sets the tone as a hard-ass professor with at least two hidden agendas. The pilot begins with a flashforward showing four of her students trying to cover up a murder while the rest of the campus rages in football rivalry-enduced revelry, in an attempt introduce the long story arc of the season. But this did not draw me in as much as I would have liked it to. That, along with the exaggerated music, quick shots of sex appeal, and the obvious foreshadows of who’s sleeping with who — I don’t know what’s worse, these students acting bad or the bad acting.

Quite similar to the unchanging seasons of Santa Barbara, fall television has become quite repetitive and redundant, and “How to Get Away with Murder” is no exception. With the occasional rainy day in winter quarter comes the occasional plot twist, but in both cases it’s quite expected which disappoints everyone involved. On the flip side, the cast itself is something worth mentioning. So why should “How to Get Away with Murder” differ? The fact of the matter is, fall television has been saturated to its capacity in criminal drama series, and it can almost be said that the pilot episode itself could have just been rewritten into yet another drama. With that in mind, don’t waste your time on Hulu waiting for the next episode to be released, because I can guarantee you, you’ve seen it all before.

If you’re hooked on social media, stop refreshing your Twitter feed and give this show a chance! Starring Karen Gillan (“Doctor Who”) and John Cho (“Harold and Kumar go to White Castle”), “Selfie” is a clever, lighthearted situation comedy telling the story of Eliza Dooley, who is too busy worrying about the amount of “likes” she gets for her selfies to realize that nobody actually likes her in real life.

The show is a modern interpretation of “My Fair Lady” and is centered on the world of Internet and social media, a world which we are all too familiar with. It’s formatted in a refreshingly creative way; in what other show would the narrator say, “wait, let me ‘gif’ my way through this” before showing you a flashback literally through gifs? Meanwhile, I also find it hilariously relatable–the lines “Ugh, hashtag the struggle,” “That gave me the feels,” and “You don’t use Facebook? Then how do you know who from high school has gotten ugly?” will crack you up because, admit it, I know a few of you have uttered those exact same words, whether online or in real life.

Other than making you “el-oh-el,” “Selfie” also gives us something to think about. I’m sure we all find ourselves, at one point or another, a little too caught up in the drama of social media. However, this show teaches us that Internet popularity cannot replace real relationships, and that sometimes we may find it rewarding to put that phone down and learn how to socialize with the people actually standing right in front of us.

Overall, “Selfie” is a great show to relax and have a couple of great laughs to during study breaks or lazy mornings. It is simple, lighthearted, creative, and has the potential to become a new hit comedy.

“Red Band Society” is, at best, a “guilty pleasure” show. The show revolves around the very original idea of sick teenagers in a hospital. If one is able to suspend their disbelief that all of these kids would actually be live-in patients at a hospital (a cystic fibrosis patient who has progressed to the point where he can run around, smoke pot, and go to the movies would definitely not require all-day hospital care), then you’re faced with a decent cast of characters. The archetypes are all there–jock, cheerleader, coma kid–and the story line, albeit a bit overdone, is initially promising.

This is the show of those five kids trying to figure out how to go through life while they’re still around to go through it, with the nurses and Dr. McAndrew providing some slightly more adult drama. These kids all wear the bands of their cancerous, quasi leader Leo, thus providing the show with a name, and theoretically creating a brotherhood of sorts between the characters. Unfortunately, it doesn’t seem like the show’s creators got beyond having an idea about a show with a bunch of sick kids.

The jokes are quite bad, there are random, shining monologues with no context, and trying to understand any of the characters’ reasons for acting a certain way is pretty pointless. However, perhaps the most frustrating thing is the lack of continuity from episode to episode. There is no real plot, storylines that are introduced are later completely ignored, and there is a whole lot of set up with very little payoff.

If one is idly watching this show while doing other things or if they do not care much for content, then it is watchable. While it’s easy to see why people initially viewed this show as promising, it is even easier to understand why the show might not get picked up for a second season.