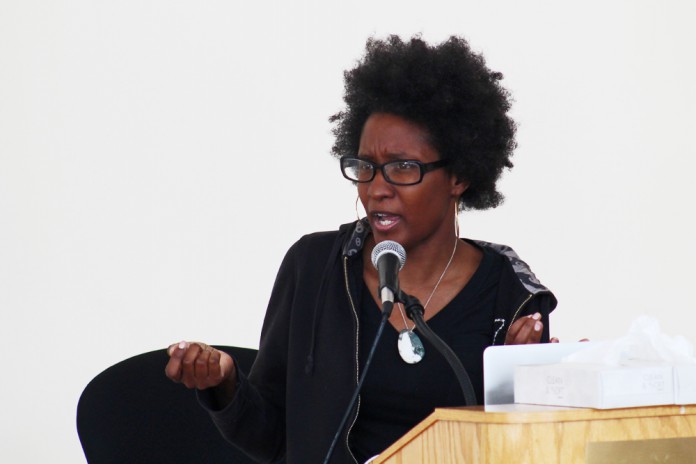 The Associated Students Womyn’s Commission held the 2014 Womyn of Color Conference at the University of California, Santa Barbara on Saturday, May 24, to create a safe space for womyn of color to build solidarity and practice self-care.

The conference was scheduled for the morning after the Isla Vista mass shooting, and as a result, the conference organizers adjusted the conference’s itinerary to meet the needs of attendees and workshop facilitators, many of whom were still in shock from the events of the previous night. Despite the tragedy, Womyn’s Commission continued to host the Womyn of Color Conference to provide a safe space for attendees to cope together.

Womyn’s Commission Herstorian Cassie Rubio helped reorganize the conference under the circumstances of the recent tragedy.

“Especially now, we cannot resort to isolation and wanting to be by ourselves,” Rubio said. “As hard as this is, it’s so much easier to cope with it in a space with loved ones, so that’s why we had the conference.”

Although the organizers had originally planned to host formal workshops, Womyn’s Commission Co-Chair Rosina Saeed said that they had to adjust the conference to have a more free-form and relaxed style.

“You have to keep people’s mental health in consideration and go at their own pace,” said Saeed. “This space is for them, by them, so we went at our own pace instead of challenging formalities.”

According to Womyn’s Commission, the conference originally anticipated 250 to 300 attendees. However, many guests and workshop facilitators felt unsafe going to the conference, so ultimately around 85 to 100 students attended.

The conference began with an open dialogue for all attendees to voice their opinions about the tragedy of the previous night. Attendees took turns sharing their personal stories about where they were during the shooting, how it had affected them, and their sentiments on the misogyny of the killing.

Later, the conference continued onto the workshops which focused on issues that affect women of color, ranging from body image to reproductive justice. The workshops included topics such as “Whitewashed: Understanding the Colorism Standard of Beauty,” “Eating Disorders Do Not Discriminate,” “Womyn of Color in the STEM Fields,” and “Eco-feminism: The Crossroads of Environmentalism and Feminism.”

Although the Womyn of Color Conference organizers had planned to host a wide range of workshops, many workshops were cancelled. Crystal Long, a second-year global studies major, explained why she canceled her workshop “Tight Asian Pussy: Deconstructing Social Constructs of East and Southeast Asian Women’s Sexualities.”

“I felt that a large congregation of women was not the safest idea at the moment,” said Long. “I also did not attend because my workshop was on violence against Southeast Asian women, which was incredibly triggering and relevant.”

However, the facilitators who proceeded to host their workshops found the conference productive and healing, including Anisha Ahuja, a third-year political science and feminist studies double major.

“It was really nice to see all my friends safe and supporting each other,” said Ahuja. “As womyn of color, as people of color, I think we have faced levels of violence and trauma at an exponential level and we rarely have spaces to be together and heal with each other.”

After three sessions of workshops, Mia McKenzie of the widely popular blog “Black Girl Dangerous,” gave the keynote speech. McKenzie wrote an improvised speech on the morning of the conference, to adjust to a more somber tone after the recent tragedy. The speech addressed issues that women of color, specifically, face—from dealing with misogynistic violence, to building solidarity to fight oppression and violence.

McKenzie elaborated on the importance of self-care in order to lead revolutionary movements.

“As women of color, we’re almost never allowed to prioritize ourselves, our healing, or our well-being,” said McKenzie. “Tragedies like this remind us just how important it is that we invest in our emotional health and that we claim and reclaim space where we can build space.”

After spoken word performances and caucus spaces following McKenzie’s speech, the conference ended earlier than originally planned. Despite the disarray due to the circumstances of the shooting, the conference’s organizers were satisfied with the outcome of the event.

“It’s been beautiful and it’s been a privilege to watch people be with each other and see how they can help each other in this really difficult time,” Rubio said. “People know how to take care of each other; we’re not needed for that. They do that on their own, and that’s really beautiful because we’re just providing the space for them to do that.”