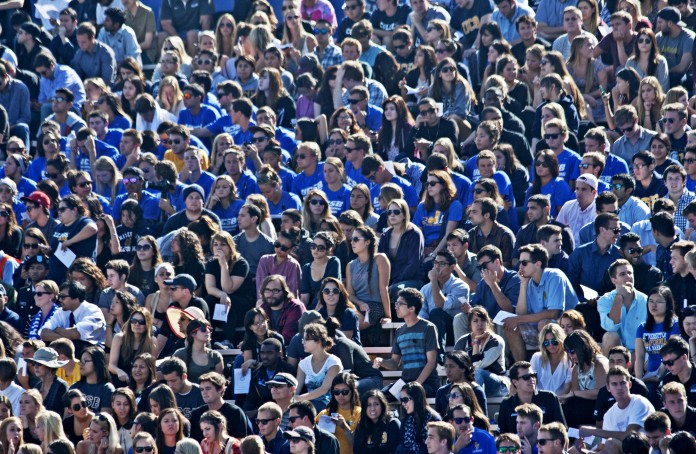 Thousands of Santa Barbara community members, students, faculty, and families gathered in solidarity at Harder Stadium on Tuesday, May 27, to memorialize the students killed and injured in the May 23 Isla Vista rampage.

As a vast multitude of mourners moved toward the stadium, the carillon rang in the belfry of Storke Tower, providing a somber resonance for the procession. Six wreaths–for James Cheng Yuan Hong, George Chen, Weihan David Wang, Katherine Breann Cooper, Veronika Elizabeth Weiss, and Christopher Ross Michaels-Martinez–were draped under the stage in tribute to the fallen University of California, Santa Barbara students.

Nearly all of the 17,000 seats in Harder Stadium were filled, and the expanse of attendees even spread to the grassy soccer field surrounding the central media stage. Flanking the crowd, the American flag fluttered in the breeze at half-mast.

Speakers from the interfaith community introduced the memorial, providing solace for the grieving families and students.

“That which unifies us is so much stronger than whatever divides us,” said opening speaker Rabbi Evan Goodman from the Isla Vista Hillel.

UCSB Chancellor Henry Yang expressed condolences for the families, relating that words could not “express the depth of sorrow, shock, and pain” felt by the community.

“It is true that many dark and difficult days lie ahead, but we will continue to draw strength and comfort from each other,” he said, “and we will become an even stronger university and community.”

UC President Janet Napolitano presented a brief speech next. She concluded with a recitation of “Walking Together Again,” a dedication to the lost Isla Vista students by poet laureate of California and UC Riverside Professor Juan Felipe Herrera.

Richard Martinez, father of Christopher Ross Michael-Martinez, also spoke. He first acknowledged the differing opinions between the affected families on how to proceed following the tragedy. He mentioned many times that he did not represent all of the families, but he still provided statements on behalf of those lost.

“Your sacrifices weren’t in vain,” Martinez said, reading a prepared statement on behalf of Wang’s family. “Your sacrifice will awake the power and authority of America. It’s time to stop the gun violence. Our children deserve a land free of fear.”

Speaking for Hong’s parents, Martinez held up a tote bag and related to the audience the family’s desire to have the animosity and violence surrounding the student deaths be “Gone with the Wind.”

Martinez has taken the media pulpit on multiple occasions following the shooting to speak out against rampant gun violence and the lack of governmental action proposed to restrict it. Asking the crowd to send postcards to their congressional representatives, he led a rousing declaration of “Not One More!”

Students chanted it in unison, twice, before Martinez appealed them to make their final declaration so loud that Washington lawmakers could hear them.