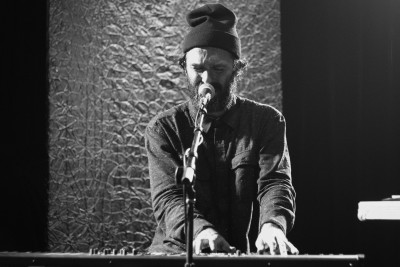 “Lots of people are spending lots of money to see some dude press play and jump around on stage,” was just one of Chet Faker’s critiques of the modern music scene during his performance on Thursday, May 29. The Australian, known for his soulful vocals and languid production, had his audience at the Roxy Theatre in Los Angeles entranced for a full 75-minute set, living up to the expectations that helped sell out both of his shows at the venue this week.

Faker, otherwise known as Nick Murphy, kicked off his performance with older songs like “I’m Into You” and “Terms and Conditions,” off his 2012 EP “Thinking in Textures.” The combination of organic acoustic tones with electronic sounds set the tone for his performance and got the crowd clapping only a few minutes in.

He then introduced his newest album “Built on Glass,” acknowledging that his independent production is made possible by all the support from his fans, and asking how many in the audience had bought it. Faker gave stunning renditions of “Blush” and “1998” while hopping between his keyboard and mixing board, looping both his own voice and dulcet tones live.

“I think it’s important for artists to be able to fuck up on stage,” he said. He then told everyone to put their phones away and to feel the music together before returning to more tracks of  “Thinking in Textures.”

While Faker’s musical acumen is undeniable, his vocal skill is perhaps his greatest asset. Mid-set, he was joined by both a guitarist and drummer, and their cover of a Jeff Buckley song highlighted Faker’s vocal mastery. Faker’s delicate and intimate vocal style pays homage to jazz vocalists of the past. Chet Baker’s influence on Faker’s style became immediately apparent.

Avoiding predictability, Faker continued to jump back and forth between “Built on Glass” and “Thinking in Textures,” playing his classics like “Love and Feeling” in the wake of newer songs such as “Release Your Problems.” All the while building up anticipation for the song that started it all for him–his cover of Blackstreet’s 1996 hit “No Diggity.” When he finally indulged the crowd it was welcomed with cheers and more fervent dancing.

However, before he had gotten half way through the first verse, he stopped the song to reiterate that everyone should put away their phones.

“I give you permission to look around you, and if someone next to you has a phone out, to knock it out of their hands,” he said. When he started singing again, the song was nothing short of brilliant.

After seamlessly merging “No Diggity” into a version of “Drop the Game” from his collaboration album “Lockjaw” with 22-year-old Australian electro DJ Flume, Faker ended his performance with a soulful rendition of “To Me.”

The humble and gracious Faker then exited the stage while thanking the crowd. He returned for the encore alone and gave perhaps his best and most intimate performance of the night: a stripped down version of his new song “Talk is Cheap,” with only his keyboard and raw vocals.

Faker brought the audience on an illusory trip back to his makeshift garage studio–where he recorded “Thinking in Textures”, by ending the night with a reminder that good music doesn’t have to come from big production companies with huge budgets. Sometimes reverting back to the fundamentals of music results in the best performances, and that’s precisely what Faker does so well.