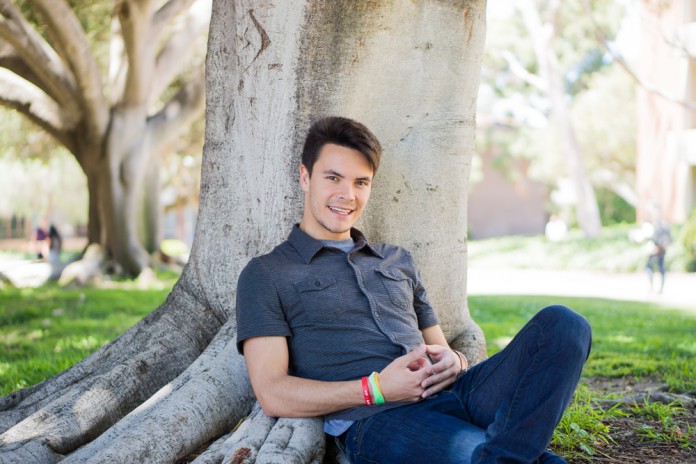 Student by day and rising YouTube star by night, third-year economics major Danny Padilla balances a lifestyle of schoolwork and video making. Whenever he’s not hitting the books, Padilla is either showing off his vocal talents in Brothas From Otha Mothas, Naked Voices, and The University of California, Santa Barbara Chamber Choir, or making YouTube videos.

Unlike many other YouTubers out there, Padilla adds his own unique twist by incorporating his beat-boxing skills into his music. With three separate accounts–one comedy and two music–this YouTube personality has over 11,000 collective subscribers.

“Comedy is something that I enjoy doing, and people get to see my weird quirky side, but music is my passion,” said Padilla.

Padilla, who began playing music when he was only 5 years old, got his start with piano lessons.

Around the age of 9, Padilla picked up other key instruments like guitar, bass, and the drums, and in high school he participated in band and choir. It wasn’t until the summer before college that he started his first YouTube channel.

“YouTube was something that was growing, and I had good friends who became YouTube stars,” said Padilla.

Once he created a channel, it didn’t take long for him to get discovered.

“I got signed to my agency, Fullscreen Inc., in December 2012, and have been working with them ever since,” said Padilla.

His YouTube channel has opened many doors and brought him different successes. Padilla has done collaborations with other YouTube stars including Nickelodeon’s Max Schneider and popular cover personality Brandon Skeie. He’s even had the opportunity to work on set with Jason Mraz, Hunter Hayes, and the band Rixton.

“YouTube has helped me make a lot of connections,” said Padilla. “I’ve met a lot of people and have made a lot of friends through it.”

His YouTube plans are to make covers more frequently–ideally one or two a week. However, this task is not an easy one.

“It’s a lot of work,” said Padilla. “Sometimes it’s 20 hours of work and sometimes it’s 50… But it’s so worth it whenever I get to work with big people or when a video gets a lot of views.”

After college, Padilla plans on moving back to his hometown of Los Angeles in hopes of eventually signing with a record label and making music his full-time job.

“I want to do it and be stable, and have enough money for food and rent,” said Padilla.

Although he will have a degree in economics as a back-up, he plans on keeping YouTube and music in his future.

“Music is something that you have to have a true passion for,” said Padilla. “There has to be a bigger need to pursue it other than the face of fame.”

Along with making a name for himself, Padilla has been busy working on his next big project. He is currently in the process of working on his very own original EP, which will be professionally produced by  Tyler Ward, a singer-songwriter who also got his start on YouTube.