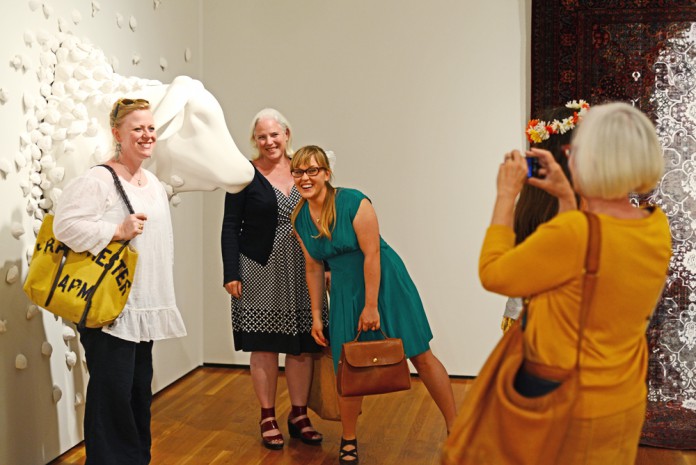 Embedded within the research-driven University of California, Santa Barbara is the passion-filled legacy left by student artists. This legacy is currently displayed at the Art, Design, and Architecture Museum at the University of California, Santa Barbara, which recently premiered its latest exhibition, “Starting Here.” The exhibit showcases the work of UCSB alumni who attended from 1950 to 2010, and though only 15 artists were featured initially at the opening on May 16, they will be joined by 38 more on June 28.

“The exhibit is meant to celebrate not only MFA graduates, but UCSB in general, and the wealth of artistic talent through the years,” said Elyse Gonzales, the curator of exhibitions at the museum.

“Starting Here” is not only a reflection on UCSB’s past, but also a glimpse into the future of the artistic community— with mediums ranging from corten steel to acrylic paint to digital media.

Sommer Roman was a particularly noteworthy artist, as she uses a variety of materials found around the house to make her artwork. Her piece entitled “Just Here” is a play on words. It consists of a five-foot-tall wooden post, with artificial grass surrounded by an ear-like shaped structure at the base. Roman’s work is very abstract, and she attempts to trigger the senses and a different way of thinking about how we navigate the world. Her pieces allow the audience to “question the idea of certainty and safety” with a multifaceted intellect and point of view.

“I am also very interested in the importance of play, and how that ‘plays’ into art-making and life,” said Roman.

This concept is indicated in many of her pieces with the materials she uses: trapezes, discarded clothing, old mattresses, and mirrors, among others that display the surrealism of her work.

Also displaying work was Enrique Martinez Celaya, a Cuban American artist who graduated with honors upon receiving his MFA from UCSB. He showcased one painting that was part of a 2006 commission series entitled Awaiting a Second Plan, dedicated to Osip Mandelstam, a Jewish man who lived in Russia during its revolution and the rise of the Soviet Union. The particular watercolor displayed at the museum covered almost the entire wall.

“As you can see, there are blue skies around the border, and there was a field of wildflowers. But I painted over it,” said Celaya.

The painting instead shows a smoke-like scene with a bird emerging from the darkness and Mandelstam’s name handwritten at the bottom, conveying the destruction and hopelessness experienced during Stalin’s rise to power.

Cathy Ellis was also among the showcased artists, and her paintings were just as unique. Inspired by both dystopia and utopia, Ellis is fascinated with the concepts behind having a completely perfect and imperfect world. One painting in particular was conceived upon witnessing an avalanche.

“My dad lives up in the mountains of Colorado, and one day there was this huge avalanche. I was fascinated by the way the thin branches of the trees curved under the pressure of the snow,” said Ellis. “It is also surrounded by a circle, which represents wholeness on some level.”

What these pieces have in common is their symbolism and abstractness. It is difficult to understand the message of each work at first glance, and some pieces require inquiry or even extensive viewing. Though some pieces were displayed at museums worldwide–from Los Angeles to Japan–the artists never forgot their roots at UCSB, and continue, to this day, to give back to our campus and show current students what it means to follow your passions.