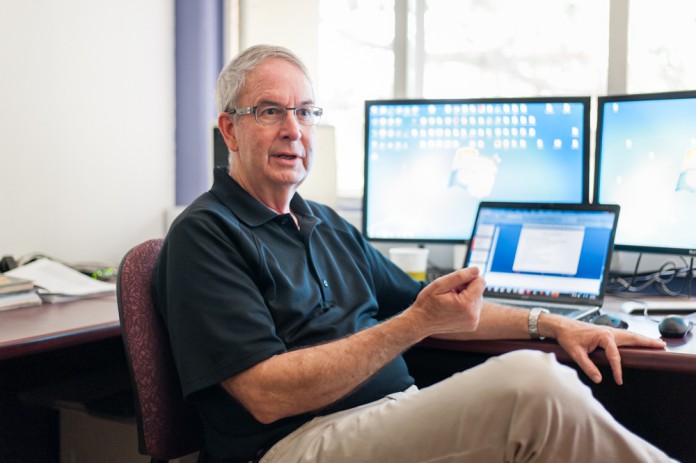 “I am truly honored by being selecting for this award and the recognition it brings to the field of location science,” Church said.

This prestigious award recognizes his consistent work in the field of geographical information systems (GIS), as well as locational analysis and modeling, natural resource management, and transportation. One of his most frequently cited papers, “Maximal Covering Location Problem,” was written in 1974 and contributed greatly to the field of GIS.

“It was first published in a journal,” Church said. “Regional science literature is a relatively small discipline; it started in the late ’40s and early ’50s. It’s a relatively new field, in a small corner of the academic world.”

Church’s paper focuses on covering problems, a branch of location science. The main goal of maximum covering is to identify the best placement of facilities with mathematical modeling. Church’s major contribution to the theory and application of location analysis has greatly impacted the field of location science.

Church’s research applies to a wide range of fields, including the fashion industry. Maximum covering influences apparel design; for example, patterns must be placed on fabric in a certain way to account for the alterations made during the stitching process. With maximum covering, one could use a model to predict the best way to maximize the coverage of the fabric to minimize the waste, and thereby the costs.

“An example of a non-spatial application is color tab design for false teeth,” Church said. Dentists use color tabs–akin to paint chips–to match the coloration of false teeth to the existing ones, he explains. Maximum covering allows the most commonly used shades of false teeth to be predicted, which eliminates excess waste.

Church started his undergraduate studies believing that he would study chemistry. However, after allergies forced him out of chemistry lab, he turned toward environmental engineering. He later studied water resources, systems engineering, and reservoir management.

“Reservoirs seem simple, but they’re not,” Church said. “Benefits of reservoirs include flood control, water supply, and power generation. Now, how do you maximize the benefits and reduce the costs? How do you do that with multiple reservoirs?”

After Church earned his Ph.D. in Environmental Systems Engineering, he worked on various projects, one of which involved optimizing the location of power plants along a river basin.

“Power plants need a source of water for cooling,” he explained. “There will be thermal discharge–warm water being released from the plant–and it will change the environment of the stream.”

The challenge was to create a model that could be applied to the placement of power plants along the river basin in an optimal way. This was when Church became interested in the location of systems rather than the water itself.

”The UC provides a fertile workplace,” Church said. “There are good students here–the students are important. Without them, we wouldn’t have a university.”

Church has authored over 230 publications in his 39-year career, collaborating with coworkers from a variety of places, such as geography, business, environmental science, civil and industrial engineering, math, statistics, and management science.

“I’m trying to create a system that gathers information from the Internet and melds it with GIS layers,” Church said, when asked about his current project.

There are 341 fire stations in Los Angeles County, Church explained. However, a model has been developed to predict that the county could service the same areas with only 254 stations.

“It takes two billion dollars a year to operate these fire stations,” Church said. “Which is about the amount of money given to the University of California to operate 10 campuses.”

Church is working toward being able to one day look at any county’s fire stations and determine how efficient deployment is. Increased efficiency could mean saving money for institutions in the long run, something beneficial to both the state government and taxpayers alike.

Church will be receiving his award May 21 at the UCGIS summer symposium in Pasadena, Calif.