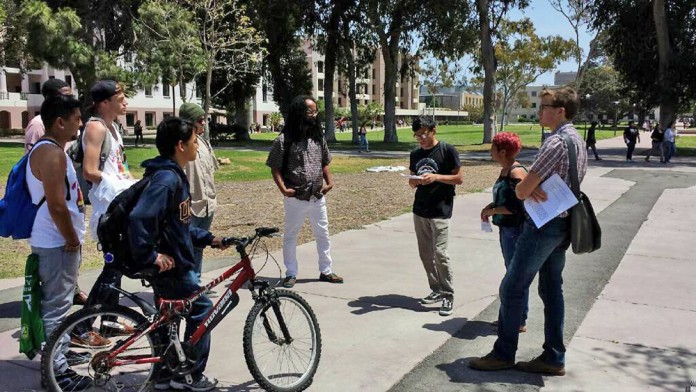 Humyn Rights Board (HRB) organized the first University of California, Santa Barbara Activist Walking Tour throughout the university on Thursday, May 8, guiding attendees through the rich tapestry of sociopolitical advocacy both native to campus and in relation to international issues.

“I think in this age of disillusionment, I think we’re doing a pretty good job of keeping these stories alive,” said HRB Outreach Coordinator Mario Vasquez, a fourth-year history major.

Though a group of only 12 students was present for the outing, there are plans for future walking tours, the HRB representatives said. They also reminded attendees of the significance of their presence, signaling that greater student involvement in the cultural history of the community allows campus activism to remain persistent even today.

“There is a lot of stuff going on and we do need to value the marginalized students that are doing a lot of work on this campus,” said HRB chair Anisha Ahuja, a third-year political science and feminist studies double major. “It’s still really cool what we are doing now in keeping stuff alive in the midst of all the activist suppression that is there.”

Student attendees were offered an event beyond a traditional tour experience—the activist march offered a mobile forum for discussion rather than a prototypical history lesson.

Steven Kwok, first-year economics/accounting major and On-Campus Senator-Elect for the Democratic Process Party, walked his bike through the whole tour, engaging with the group on the various issues.

“I think activism still is crucial nowadays,” Kwok said, alluding to Rosa Parks and the Civil Rights Movement as seminal in protest history. “Activism is something that I do have to do to make sure these people’s voices get heard.”

The tour began in front of the Coral Tree Café, where tour guides Ahuja, Vasquez, and HRB Publicity Coordinator Ansel Lundberg signaled toward the pervasive history of Cheadle Hall in on-campus protests.

Cheadle Hall has long been known as a symbol of the university administration, the guides noted, prompting demonstrations such as the 1981 sit-in protest of the UC’s affiliation with nuclear weapons facilities Los Alamos National Laboratory and Lawrence Livermore National Laboratory. Though 25 people were arrested in Cheadle Hall for trespassing, and the UC’s association with the nuclear facilities remains intact today, the HRB guides attested to the broadened awareness and opposition to the UC’s unscrupulous management decisions.

Lundberg also spoke of “a revival of anti-war protests” a decade later, in which “two separate rallies against the Persian Gulf Wars,” made up of 2,500 and 4,000 students, spoke out against the United States’ military involvement overseas.

The tour group took a few short steps toward North Hall, and the guides motioned toward a plaque commemorating the 1968 take-over of the building by 12 African-American UCSB students. These members of the Black Student Union, responding to on-campus racism and a lack of representation, renamed the building “Malcolm X Hall” and submitted a list of demands to the Chancellor. Their efforts led to the creation of the Department of Black Studies and The Center for Black Studies on campus.

“There have been efforts previously to kind of further enshrine the history of North Hall by providing a display that is more than there is now, which is just a plaque,” said Vasquez. “It’s been a struggle to codify and institutionalize the history. But its still happening.”

Next, looping toward El Centro, or Arnulfo Casillas Building, the tour reflected on the advocacy of UCSB’s Latino community. Describing the building as “a stronghold for Chican@ organizations on campus,” the tour discussed the 1994 Hunger Strike Movement, which led to the establishment of the ethnic and gender studies undergraduate requirement. El Centro still serves as a resource for students today.

While ambling through campus, the group also discussed civil unrest in 1970s Isla Vista, focusing specifically on the Bank of America building burning and the shooting of a UCSB student.

After making stops at the MultiCultural Center, Corwin Pavilion, and the UCSB Lagoon–reflecting on topics ranging from Israel divestment, South African apartheid, and Vietnam-era demonstrations–the group reached the Faculty Club with a reminder that the activist culture is not yet extinct on campus.

Earlier this year, hundreds of students gathered at the Faculty Club to protest the appointment of UC President Janet Napolitano, former head of the Department of Homeland Security, during her visit to the university.

“The fact that there’s so much organizing and concern that happens when one of these high level administrators comes around, I feel like it’s a bad sign of an unhealthy institution overall,” said Lundberg.

After handing out an HRB Zine, “What the F*ck UCSB?” the tour concluded at the Student Resource Building; but even there, the dialogue continued. Members of HRB reflected on the evolving, but oftentimes diminishing, role of community activism on campus.

“There’s a strong history of activism at UCSB and there still is currently,” said Mahader Tesfai, whose extensive campus involvement includes his roles as faculty adviser for HRB, Associated Students UCSB Living History Project Coordinator and former AS President. Noting a demographic change to more “middle-class” student admissions, Tesfai suggested, “there is a shift in the corporatization and privatization of the university… I think the university is shifting a lot more than the activism.”

The topic of student activism gave HRB an opportunity to be a mouthpiece for persistent UC issues, engaging students with locational histories rather than chronological ones. The group reflected their motivation for alleviating sociopolitical ills, attesting to the fact that the walking tour was not just an exercise in the history of community activism, but a reflection of its perseverance in the future.