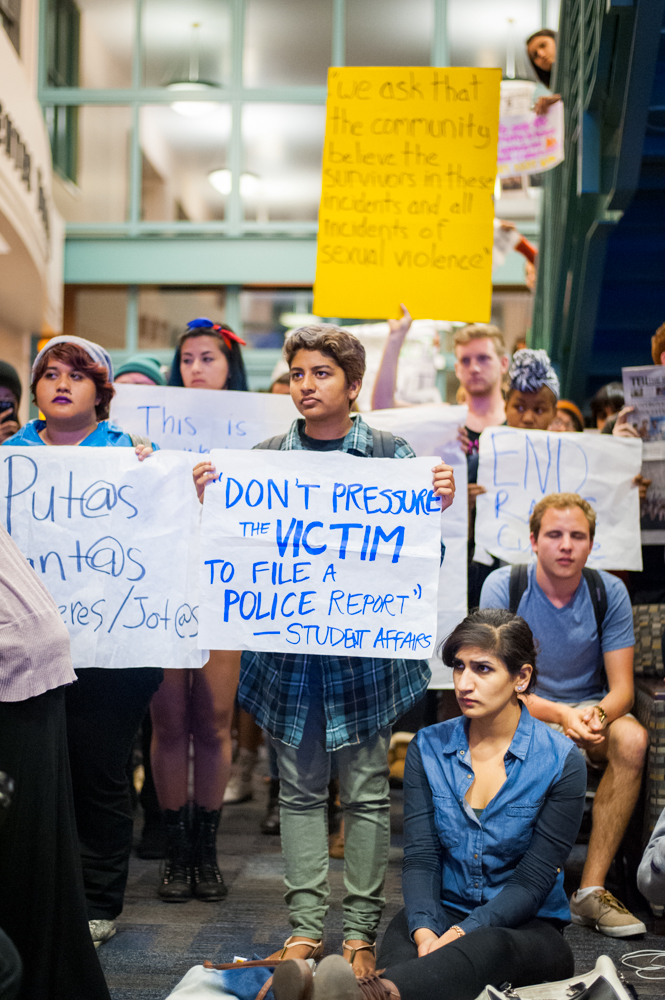 The 2013-2014 Associated Students Senate made its final decisions on Wednesday, May 21, before ceding its powers to newly elected officials, whose inauguration was attended by a number of silent protestors.

The protest ensued just after midnight as the new Senate convened in the lobby of the MultiCultural Center, and was organized to contest the inauguration of External Vice President of Local Affairs (EVPLA) Beatrice Contreras in accordance with accusations of sexual assault brought against her in April.

Protestors held signs reading statements such as “How many people will you silence?”, “This is what rape culture looks like,” and “Being silent is being complicit.” Many stood intermittently throughout the seated audience, while some held their signs against windows of the building from outside.

After the swearing in of senators, as well as executive officers Ali Guthy (President), Angela Lau (Internal Vice President), Melvin Singh (External Vice President of Statewide Affairs), Bailey Loverin (Student Advocate General), and Contreras, Lau called the first meeting of the new Senate to order at almost 12:30 a.m. One protester remained in the lobby, standing before the Senate as he turned side to side, displaying a sign that read “Mentee does not consent.”

Earlier that evening, the outgoing Senate reconvened on a contentious bill outlining changes in AS Student Lobby’s legal code. The primary point of debate was a stipulation in the bill permitting the External Vice Presidents of Statewide and Local Affairs (EVPSA and EVPLA) to appoint the group’s chairs each year.

“There are a lot of dangers that will be possible if our autonomy to choose our leaders and the issues that we lobby on is ceded to an outside entity that [isn’t] keeping up with what goes on in the organization,” said Lupe Zelada, an off-campus senator and vice-chair of Student Lobby.

Off-Campus Sen. Derek Wakefield advocated for the bill on the grounds the voices of the elected officers should take precedence over those of appointed officials.

“If the EVPLA and EVPSA are elected authentically by 3,000 [to] 4,000-plus students, their voice should be viewed [more highly] than the voice of somebody who is appointed in a position,” he said.

EVPSA Alex Choate recommended during her final weekly report that the Senate add an amendment to clarify that the bill is not meant to undermine the autonomy of Student Lobby, but ideally would facilitate an interview involving the incoming EVPLA and EVPSA, along with the outgoing Student Lobby co-director and representatives from the Committee on Committees. Thereafter, the EVPLA and EVPSA would submit their chosen recommendation to the AS President, who then would have to submit the recommended candidate for Senate approval.

Ultimately, the bill passed with a 12-6-4 vote, having been amended by Off-Campus Sen. Andre Theus to include Choate’s proposed change.

The outgoing Senate also passed “A Resolution in Support of a Ban on Hydraulic Fracturing and Acid Well Stimulation,” which encourages Gov. Jerry Brown and the California state legislature to ban the process of “fracking,” which involves drilling and injecting fluid into the earth at a high pressure in order to fracture shale rocks and release natural gas inside.

Lastly, the passage of “A Resolution to Accept and Approve the AS Strategic Plan” signified the finalization of a six-year plan, designed in large part by Off-Campus Sen. Jimmy Villarreal and outgoing AS President Jonathan Abboud, that is intended to set guidelines for the Association as a whole through the year 2020.

The executive officers of the 2013-2014 year ended their terms with some parting words to the Senate and to their successors. Abboud cautioned against allowing political party divisions to drive decision-making, and also directed some words of advice toward incoming President Ali Guthy.

“Don’t let party politics take over AS,” he said. “Do what makes sense, not what’s emotional, and not what people are pressuring you to do. You got elected to make the decision that needs to be made.”