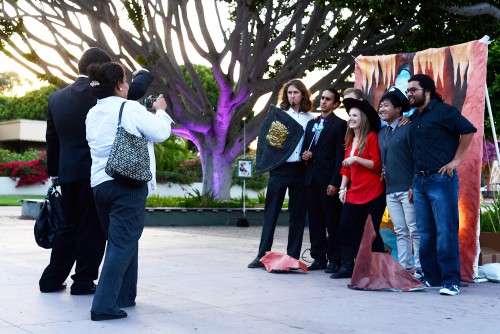 Embarking on the theme of “Choose Your Own Adventure,” the 23rd annual Reel Loud Film Festival took place at Campbell Hall on Friday, May 23. The festival showcased 14 silent films created by University of California, Santa Barbara students.

The festival was preceded by an art show which featured an assortment of collages, landscapes, and portraits. Early-comers milled around outside Campbell Hall in the hour before the festival began, viewing the art, listening to the live jazz band, and posing for pictures in front of the adventure-themed canvas backgrounds.

A red carpet led up to the theater, giving it a true film festival feel. Soft, colored lighting illuminated the art in front of Campbell Hall with a romantic glow. The formal attire worn by many of the film students also added to the Hollywood-like glamour.

Parents, film majors, and UCSB students alike crowded into Campbell Hall, which quickly became packed with attendees eagerly awaiting the anticipated lineup of student films. A sense of hushed excitement fell over the crowd as the lights dimmed and the show began.

The festival began with an introductory short film and was met with eager applause from the audience. The mascot of Reel Loud, a figure dressed head to toe in a vintage diving suit, complete with brass helmet, rubber gloves, and a wizard’s cape, traveled far and wide. He met with characters from the short films, which would soon be shown, and handed them invitations to the festival.

The short silent films followed each other in quick succession, with each film lasting anywhere from five to 10 minutes. The live musical accompaniment integrated with the silent films provided unique soundtracks and sound effects. The films ranged from comedies to subtle dramas, with title cards occasionally interjecting the films to provide insight into the plot, a trait typical of silent films from the early 20th century.

The allocation of five awards succeeded the films. The awards include Best Editing, Best Musical Accompaniment, Best Cinematography, Audience Choice, and Scott Wells Golden Reel. The Scott Wells Golden Reel award, was recently renamed from the Reel Loud Best Film award in honor of a UCSB Film Studies alum who passed away in 2012.

Thunderous applause followed each short film’s conclusion, with perhaps the most audience approval attributed to one film in particular, “A Man, A Mustache.”

Directed by freshman film and media major Johnny Rafter, “A Man, A Mustache” follows the plight of one young man who must decide between keeping his beloved mustache and kissing the girl of his dreams. The girl, put off by the man’s rather large mustache, tells him she will not kiss him until he shaves it off. Conflicted, the man nevertheless attempts to shave off the mustache, when all of a sudden it flies away from his face. The man then chases the mustache around town as it grows in size, and the film eventually culminates in a classic Western showdown. The film follows the characteristics of 20th century silent film most closely, with 1920s-era costumes and set design.

“I think I came up with it [the story] in 10th grade in high school,” Rafter said. “It was just a little idea, like a runaway mustache, and one night my roommate Keenan and I were brainstorming and I pulled out the idea, we fleshed it out, and decided to do it for real life. It took a few months to get the location, five days of shooting, and a couple days of editing.”

To tumultuous approval from the audience, “”A Man, A Mustache“ was awarded the Scott Wells Golden Reel, as well as Audience Choice and Best Musical Accompaniment.

Rafter also expressed excitement and surprise at receiving the Scott Wells Golden Reel award. “I’m really honored,” he said. “I didn’t expect it at all! It feels really good!”

Several other films made note, such as fourth-year global studies major Bennett Piscitelli’s “You’re on Air,” which won Best Editing. Set in the KCSB radio studio, “You’re On Air” is about people who get turned into vinyl records, and whenever someone plays one of the records that used to be a person, they also turn into a record.

Another memorable film was “X,” directed by third-year film and media major Daisy Rogozinsky. “X,” shot in black and white, follows a woman struggling with the uncertainty of young love. “X“ was notable for its masterful cinematography, and later won the Best Cinematography award at the end of the festival.