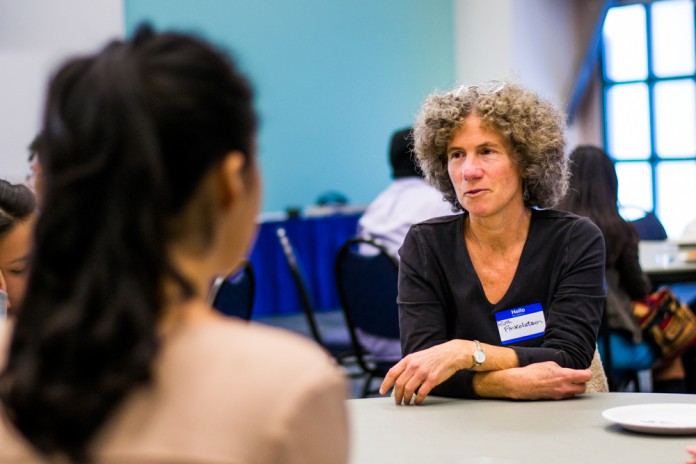 “Do you want to get to know your Biology professors outside of the lecture hall and office hours?” the email invitation from SUB asked.

About a dozen professors from the MCDB and EEMB departments attended this two-hour event, as well as close to 50 undergraduates.

“We want to make you feel like more than just a name and a perm number,” Professor Kathy Foltz said. “At one point, all of us have had the same questions you have–and someone helped guide us.”

Foltz, a member of the MCDB department, has been active in reaching out to and mentoring undergraduates. Her research involves studying the mechanisms controlling fertilization in marine invertebrates.

“It’s always helpful to know who’s in your classes,” Marissa Perry, the programming chair of SUB says. “The Society of Undergraduate Biologists is useful for networking, and provides a support group for students.” Classes can contain up to hundreds of students, and it is often difficult to receive personalized attention in classes or to get to know professors outside of classes.

“Biology is one of the biggest departments on campus, and it’s growing every year,” Abby Barry, the secretary of SUB said. “In my core classes, I often didn’t know how to reach out to other students.”

Last spring, two friends and biology majors – Jessie Wong, and Kristina Gard, decided to take steps towards fixing this problem. “There was no biology club on campus,” Jessie Wong, co-chair of SUB says. “We just wanted a biology club where we could all meet and discuss classes, study together, and help each other out.”

SUB is currently the only official biology club on campus. It had been established previously but had expired until Wong and Gard decided to revive it.

“We wanted to turn the biology department into a community,” Barry said. “We want to get to where students and faculty both know who we are, and what SUB is about.”

Earlier this year, SUB hosted several events, such as Freshman Welcome Week and an informative speaker event presented by Foltz about medical and graduate schools. The group plans to make the Spring Luncheon a bi-annual event, according to Barry.

For more information regarding the Society of Undergraduate Biologists, students can like their Facebook page or join the Facebook group. Future events will also be publicized through the Biology Department’s regular emails.

The Society of Undergraduate Biologists can be reached at ucsbsub@gmail.com.