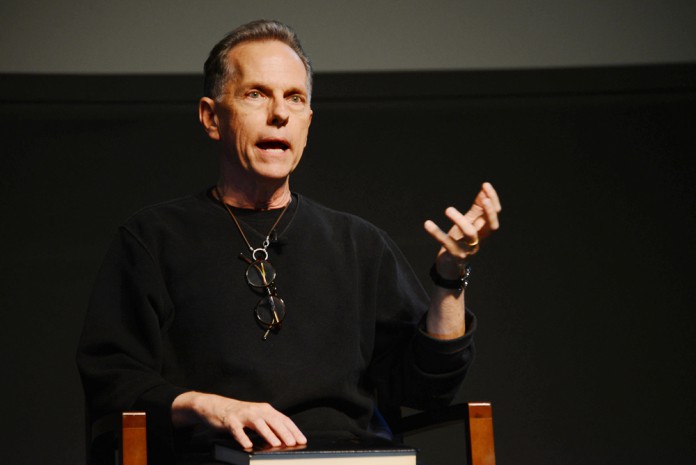 The Carsey-Wolf Center’s “Script to Screen” film series presented a 30th Anniversary screening of “Footloose” on Thursday, April 24, in the Pollock Theater. The film was followed by a Q&A with the film’s screenwriter and Oscar winning songwriter, Dean Pitchford, who spoke about what the movie is actually about. The theater’s top-notch audio and visual capacities provided the best possible environment to experience the film’s blast from the past, 80s disco soundtrack.

“Footloose” stars a young Kevin Bacon, who plays Ren McCormick, the witty, sexy, David Bowie-esque newcomer in a small Midwestern town. Actor Lori Singer, whose classic American beauty look bares a striking resemblance to that of Lana Del Rey, plays Ariel Moore. Ariel is a firecracker, a straight-shooting teenage daughter rebelling against her conservative father, Minister Moore (John Lithgow), and his efforts to ban pop music and dancing among young people in the town. Ultimately, Ren and Ariel become the film’s high school lover protagonists, and they end the irrational ban on dancing and music with a Senior Prom.

Immediately after the screening, Pitchford joined host Matt Ryan on stage for the Q&A portion of the evening. Pitchford is an eloquent, soft-spoken, and well-dressed writer. He said he had not watched “Footloose” in a movie theater since its debut in 1984 when, Pitchford recalled, he piled out of a taxicab with songwriting partner Tom Snow and snuck into the back row seats of a theater, where the pair anxiously watched for the audience’s reaction.

Pitchford is invested in Footloose in the way that a writer becomes invested in a large project. He said he wrote 22 drafts of the script, spent time researching in Elmore City, Ohio, and worked with director Herbert Ross and the crew throughout the shooting and editing process. Additionally, in collaboration with musician Tom Snow, Pitchford wrote the lyrics to multiple songs from the film’s soundtrack, such as “Let’s Hear it for the Boy,” “Dancing in the Sheets,” and “Somebody’s Eyes.” After watching the film on its 30th anniversary, Pitchford said, “I was having a hundred flashbacks a second!”

Pitchford elaborated on the film’s themes of grief and familial loss. In the movie, Ren’s father abandoned the family, and Minister Moore deals with the death of his teenage son in a tragic car accident, supposedly the result of disco music and lascivious teenage spirit. Despite the general conception that “Footloose” is a movie about a town that cannot dance, Pitchford said, “I’ve always described it as a movie about a father without a son and a son without a father.” He said the script is about human nature and Ren and the Minister’s mutual healing of one other.

Although his colleagues pressured Pitchford to change the scripts’ setting from a temporal 1980s town to a small American town in the 1950s, he chose to remain true to a newspaper clipping inspiration. Pitchford said that in Elmore City, “dancing was outlawed for 88 years.” In 1980, a group of high school students lifted the ban and revived prom for generations to come. In his research of Elmore City, Pitchford talked to the minister’s daughter, one of many young women “who danced on the edge” after being constrained by a seemingly unbreakable tradition barring dancing for 18 years.

As the night drew to a close, Pitchford humbly acknowledged that his screenplay helped launch many successful actors’ careers, including those of John Lithgow and Sarah Jessica Parker. Pitchford has fond memories of working with Bacon, who was only 23 at the time of production, and whose street-kid Philly style worked well with the character of Ren. Pitchford chuckled and said, “I run into Kevin Bacon in airports.”

Goleta’s Lemons are Anything but Sour