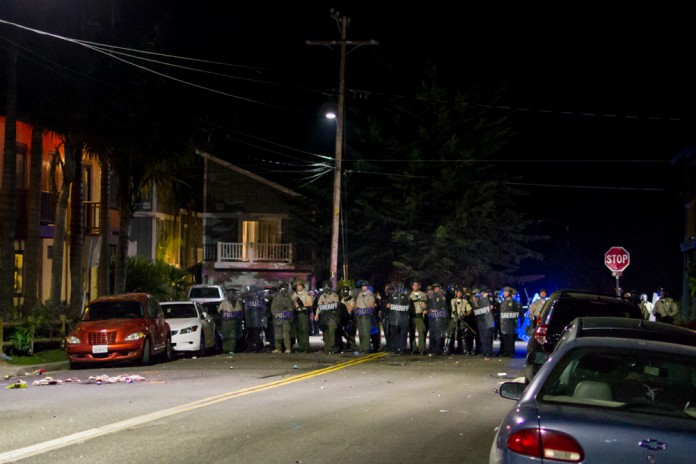 I write this evening because I feel that there is an important, even necessary, aspect of this weekend’s unfortunate riot in Isla Vista that is entirely missing from our conversation about this regrettable event. I am not a supporter of the riot or of civil unrest in general, and I regret that students (and police officers) were injured this weekend. Nevertheless, I believe that there is something that must be said about factors contributing to this event that, to date, no one has been willing to say. More specifically, I would like to ask questions about the University’s role in this event that no one seems to be asking during the public performance of guilt and blame that has occurred in the aftermath of the riot.

I do not live in Isla Vista, was not present at the riots this weekend, and have not spoken to anyone who claims to have been involved – and I cannot speak authoritatively about the rioters’ motivations. But I would like to ask the campus community a simple question: in general, why do riots occur? The discourse about this event tends to frame it in terms of “bad behavior,” “the ‘wild party’ stereotype and image,” and spoiled students reacting “inappropriately” to a situation in which their immature desires are balked. The email by Jonathan Abboud and Kyley Scarlet, Associated Students President and Internal VP, sent to students on the morning following the riot, is a typical example of this discourse. I believe that this discourse itself contributes to the problems against which the riots reacted, and I believe that it is crucially important that someone say so in the aftermath of this event.

What I find most relevant in Abboud and Scarlet’s email is not the cloudy thinking evinced by their message, though this is worth looking at. Is it in fact true, for instance, that “What happened last night in Isla Vista was inevitable,” and is it not, in fact, depressing and defeatist to assure the student body of this? If the statement is true, then why do they bother to assert that “We can change IV so that this never happens again”? At the most literal level, how could it even be meaningful to assert that “the expense on the student body of UCSB” incurred by “Deltopia and Halloween” is “insurmountable”? What does it mean, after all, to have an expense that can be “surmounted”? Can “expenses,” in fact, be divided into the “surmountable” and the “insurmountable”? Does not the conceptually muddy language in this email suggest it is not an analysis of the events, but rather merely a rhetorical maneuver?

Rather, what I think is particularly relevant in relation to this email is that it does not ask the question of why the riot occurred. Instead, it merely assures everyone that what we need to understandis that the reason the “riot last night happened” was “because we encourage an image of IV that is not healthy.” Is it in fact images and the sense of civic identity that they create that are responsible for causing riots? Is that all that is required to avoid riots – to encourage “a healthy image”? Which images of IV would be “healthy” under Abboud and Scarlet’s definition, and how exactly do healthy images ensure a riot-free city? None of these questions are addressed in the message, which merely declares the ostensible causes of the riot without doing readers the courtesy of even bothering to produce an argument that the “explanation,” if it can be dignified with that term, is correct. Abboud and Scarlet’s email does not produce an argument: it merely serves as a political position statement. As with so many declarations by people who fit in one way or another into the University’s administrative bureaucracy, the recipients are simply intended to take the declarations as true at face value – and to obey. This is nothing more nor less than interpretation (and governance) by fiat. There is no analysis. There is no dialogue requested, and no assertion that dialogue on the issue would be welcome. There is simply a position taken on behalf of the student body by its elected officials, who have not even bothered to go through the formality of requesting input from the people whom they were elected to represent before they engage in a public performance whose function is to declare the guilt of the student body.

So I would like to ask again: why do riots occur? Again, though I am not qualified to address the specific causes of this particular riot, I would like to suggest that riots generally occur when a situation is perceived both as (a) intolerable, and (b) impossible to respond to in any other way. Riots are not the reaction of spoiled children. They are a last-resort expression of rage that cannot be expressed in any other way. As with so many other situations, the grievous error that I believe that the University administration, at multiple levels, has made in regard to the Deltopia tradition (and, earlier, to the Floatopia tradition) is to create a bureaucratic university culture in which students are not welcome to participate in meaningful ways in decisions which affect them. In which students have no real voice, though a very real stake, in decisions that are made by administrators. In which governance by fiat, rather than through dialogue and collaboration, is the norm. In which no one in the University administration seems to care why the students would want to have a large-scale party in the first place, but finds it entirely appropriate to use force to control what happens off campus in order to curate the University’s image for the world. In which conversations on social networks are silently monitored and public beaches are closed in response to any “potential for a ‘Floatopia’ type event to occur” (as UCSB police chief Dustin Olson said in his emails on the subject early in April of 2012 and 2013). In which the University works fist-in-glove with off-campus police to enforce its will instead of talking to the students for whose benefit it exists in the first place. In which the shutting down of off-campus parties is seen as so important to the curation of the University’s image that it will be effected by any means necessary, including rubber bullets and tear gas. In which, as I am so disappointed to find Abboud and Scarlet asserting in their email, we are told that what we most need to consider is not real educational issues, or the question of what role education serves in our society, but rather the “image of IV.”

I would like to suggest that what the University needs to consider in order to avoid further instances of civil unrest is not, first and foremost, the face we present to the external world, or whether Isla Vista culture is or is not fairly described using the catch-all fuzzy-thought feel-good metaphor “healthy.” Rather, what the University most needs to consider in this matter – with substantial input and real dialogue with the student body itself – is what the students of UCSB want to get out of their college experience. Moreover, we need to consider how the University can better involve students in making educational decisions that affect them. When was the last time that the University administration asked these questions of the student body – not by soliciting feedback on multiple-choice online surveys about isolated and comparatively small issues (though this practice also has its place), but in a genuinely meaningful way?

Finally, we need to shift our institutional culture so that we recognize, implicitly and explicitly, that the purpose for which the University exists is not merely to control its own image while positioning students as supplicants of the bureaucracy who, if obedient, are rewarded with the opportunity to jump through hoops to obtain a job certification. Rather, the University badly needs to center a new culture around an understanding that its purpose is to provide a real education for students that develops them as human beings and as citizens – and that involving students in genuinely meaningful ways in their own governance is a necessary prerequisite of this deep shift that desperately needs to occur.

I take the time away from my busy teaching and research schedule to write this evening not because I condone this instance of civil unrest – I do not. I would like to be the first to say that I would prefer to see the student body organized and proactive in their response to their treatment by the University, rather than reactive and disorganized. I would also like to see the student body protesting more central issues than the right to avoid police interference while getting intoxicated and fornicating (though I believe these are also important, and even central, aspects of the college experience for many students).

But neither do I believe that this is an isolated incident, or one that is unrelated to other administrative matters (such as – to pick just one example – the contemptuous appointment by the Regents as the University’s head not of an educator, but of the nation’s former top immigration cop, who has zero experience in education, after a genuinely minimal comment period, and despite the significant protest that did occur during that period). The University has developed a culture in which students are alienated by telescoping layers of administration from the distant men and women who seem to believe that their six-figure salaries entitle them to govern the increasingly indebted student body by fiat and without soliciting input or having genuine conversations that collaboratively incorporate students into the decision-making process. What the University most needs to do in order to avoid further instances of civic unrest is not to send the student body emails in which it interprets and governs by making authoritative (and authoritarian) declarations. What the University most needs to do is to listen to and demonstrate that it genuinely cares about the opinions of the students for whose benefit it exists. What the University most needs to do is to provide students a genuinely meaningful way other than rioting of engaging with central questions that go directly to the heart of what the educational experience means to them.