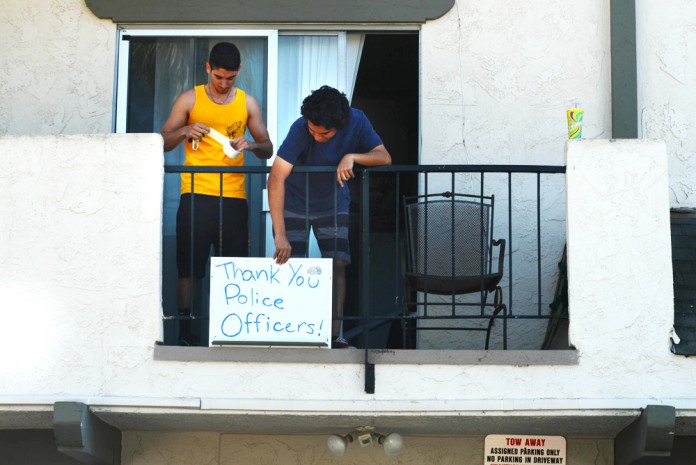 I spent a good part of the night of Deltopia squinting through my window to watch the melee unfold on Del Playa. The cops shined flashlights at our balcony, tear gas wafted through the air, and we strained to hear what was going on—the orders of the sheriff, the faint chants of a dwindling crowd, the pops of rubber bullets shot, the lone trumpet ironically playing the national anthem. It got out of control. We all know that.

But when I think back to everything that happened, it’s not the chaos of the night that resonates with me but the events of the morning after. From as early as eight in the morning, residents and volunteers were sweeping up the layer of glass on the street, picking up trash, grooming ruined lawns, and making signs to thank I.V. Foot Patrol and the rest of the officers for keeping us safe. One organization that had a huge part in this was the Adopt-A-Block program, a volunteer program dedicated to keeping Santa Barbara neighborhoods clean and beautiful.

Adam Porté, the Adopt-A-Block supervisor, had been preparing for Deltopia since January.

“Last year was a catastrophe,” said Porté. “I looked at photos and thought ‘We have to eliminate this.’”

Porté contacted property managers, lieutenants, business owners, and more asking if their dumpsters could be used, considering how the trash would be disposed of, and dealing with other logistics. The morning of Deltopia started off slow, but once people started pouring in, Porté knew that he—along with his over 300 volunteers—had their work cut out for them. Many of the volunteers had contacted Porté beforehand, but some spontaneously woke up on Sunday morning ready to help, bringing with them brooms and dustpans from home. Over 6,000 pounds of trash was collected that morning, and Porté is still receiving calls and emails from people who want to continue to be involved.

It is displays of commitment like the ones seen in the Adopt-A-Block volunteers and countless others that truly represent our student body.

“Either we’ll forget about it, or it will make a difference one way or another,” said Garrett Gerstenberger, managing partner at Isla Vista Screen Printing and a member of the class of 2011. “We need some action after the reaction.”

As a former student and now a business owner in IV, Gerstenberger feels there is potential in the will of the student body and of the residents of IV. He notes that if we have the ability to flood the streets for Deltopia or unite to win competitions to have movie premieres or bands come to our campus, then we should have enough of a collective identity to control what happens in our own home.

“We should want to make this paradise a better paradise,” said Gerstenberger.

University of California, Santa Barbara Chancellor Henry Yang is also looking toward the future. Based upon the positive and encouraging response from students and the university community, Yang feels optimistic that UCSB is headed in the right direction.

“There is a focus on short-term solutions to prevent this from happening again, as well as long-term solutions to improve the environment and change the culture of Isla Vista,” said Yang. “I so much appreciate the concerns and suggestions that our students and other members of our campus community have shared with me. The message I received is that our students want to rise to this occasion and truly create positive change.”

The events of Deltopia do not define us. It’s what happens the days, months, and years after that will truly delineate our community.