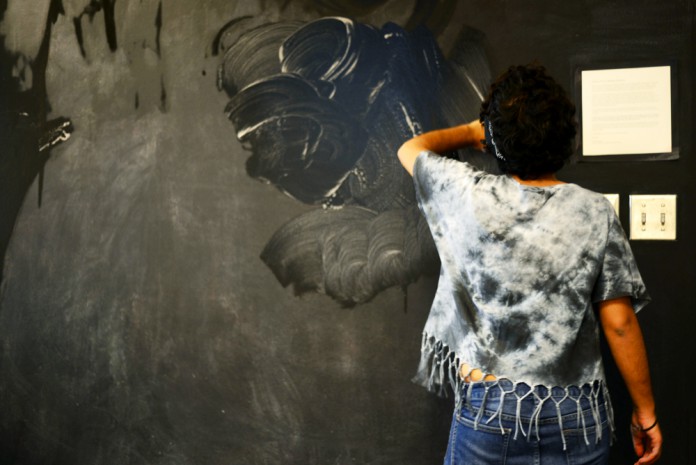 Dwarfed by the giant black chalk wall in the MultiCultural Center’s meeting room, Delphine Louie Anaya, wearing a white smock splotched with old paint in smears of green and electric blue, carefully smoothes a section of rich purple chalk. Though her canvas is immense, Anaya focuses on details–from the creases in a formal suit to the shine of buttons–with a fervent intensity. The chalk rasps against the board as she crouches on the floor, constantly checking her reference, a Norman Rockwell piece portraying Ruby Bridges. A pair of sunglasses perches upon the top of her head, forgotten amid her intense concentration.

Since April 7, artist Delphine Louie Anaya has been working on a live exhibit, using the MCC’s chalk wall as canvas, in an effort to create an image that embodies the mission of the MCC. The live art will continue until an estimated completion date of May 2.

“We came across [the Ruby Bridges image] and thought it would be appropriate for the theme. We wanted to utilize the wall because that wall is a wall for empowerment,” said Anaya.

The figure of Ruby Bridges is certainly an arresting one that represents the struggle for integration of schools. The girl’s dress and shoes are starkly white in comparison to her deep skin. Flanked by three Deputy U.S. Marshalls in suits and yellow armbands, the young girl stares forward determinedly, school supplies under one arm. She is unperturbed by offensive spray-paint on the wall and the remnants of a thrown tomato behind her. Anaya expressed ethical concerns over faithfully reproducing the spray painted word, an offensive term to African Americans. Anaya explained that majority of reactions to the work have been positive, and looks forward to fostering more dialogue with students about her art.

Anaya has been a lead artist, concept artist, background painter, and digital artist working for Disney Interactive, Mattel Toys, Hasbro Interactive, Universal/Vivendi, and Sony. She is currently an art teacher at Laguna Blanca School in Santa Barbara. Anaya is also a veteran of I Madonnari, an Italian street painting festival that has become a Santa Barbara mainstay. Anaya has done chalk art in far-flung locations like Germany, Italy, the Netherlands, and Mexico.

“It’s a good way to raise money and awareness for the arts in general,” said Anaya. Travelling all over the world for competitions and for charity, she has been recognized both nationally and internationally for her expressions of the figure and engaging imagery.

Anaya is very inspired by the Renaissance masters.

Be sure to swing by the MCC and watch as Anaya’s vision culminates into one large and magnificent image. All are welcome to watch, speak with Anaya, and even contribute to the piece.