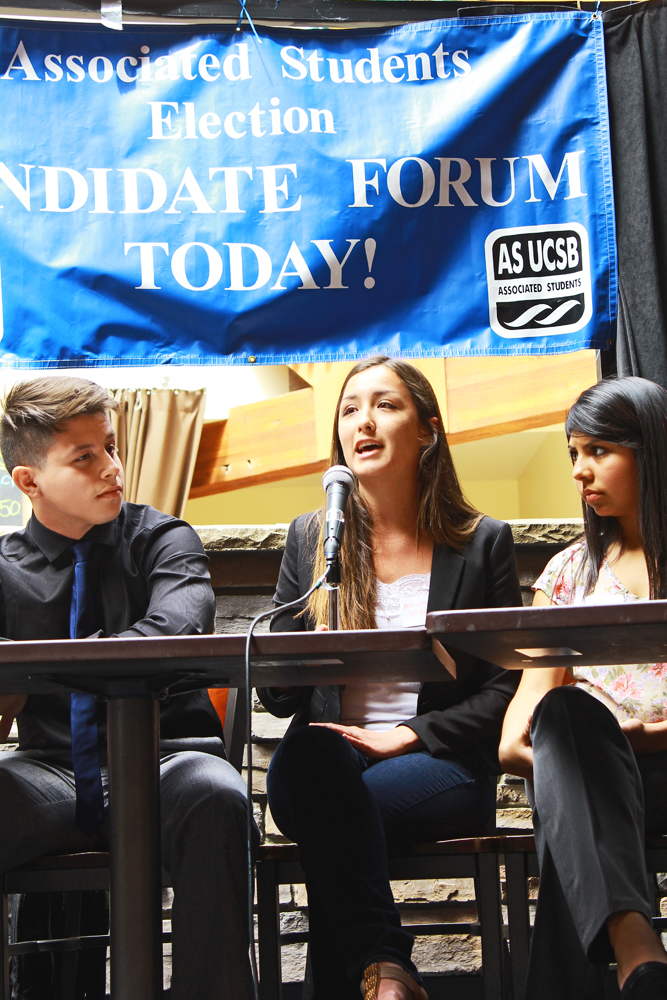 As Associated Students election season begins, 12 students running for the position of off-campus senator were asked a series of questions on Monday, April 14, in The Hub to start the week of candidate forums, which give students the opportunity to learn information about the candidates. Both the Democratic Process (DP) Party and Open People’s Party (OPP) were represented at the forum.

The first question was in regard to how candidates would plan to represent the whole Isla Vista community, including non-university students.

“We as students often get caught in a bubble and we push out other families and non-university students due to the increasing rent,” DP candidate Raufin Khan said. “Additionally, we need to recognize that IV does not have a real government.”

“One thing that I am personally committed to is a Pardall Center for all IV residents,” OPP candidate Haywood Hunter said. “This center allows you to get to know your neighbor and look out for one another. I feel like there is not enough communication amongst the residents, so there should be an open forum within this center.”

“I want to represent the IV community by creating more resources for homeless people,” DP candidate Diana Dang said. “I want to try to build a place that is warm and safe for people without homes. We need to create a more safe environment as a step towards bringing the community together.”

The second question asked how each candidate would explain what Associated Students (AS) was. Common themes included a unity and representation of students.

“AS is more than just a group of people in a room,” DP candidate Gema Hernandez said. “It represents people on and off campus. It has the ability and power to create change on campus and give students a voice.”

“AS is all of us,” OPP candidate Izeah Garcia said. “We all represent our university. We are a student oriented service that has the ability to create what students want and need.”

“I would say we are all AS because we all participate in AS,” DP candidate Allison Bettencourt said. “This position we are running for is just a representation of the students. Each student is AS. This position should represent not only this branch of government, but all the students.”

The third question asked candidates how they would use their position to help victims of sexual assault while making things safe for everyone.

“Sexual assault is not new at all,” OPP candidate Paola de la Cruz said. “Fall quarter of my freshman year, I was a victim of sexual harassment. Now that I am involved in AS, I know that there are hotlines to call for help. I want to make sure students know there is help out there and not experience what I had to alone.”

“I think a large problem is the fact that many people only see this happening after a large occurrence,” DP candidate Anumita Kaur said. “Sexual assault is always happening and needs to be addressed regularly.”

“An ounce of prevention is worth a pound of protection,” OPP candidate Hiro Bower said. “One way we can do this is using the Pardall Center to hold forums to voice such concerns.”

The final question related to Deltopia, asking candidates to assign blame and assess how they would change things.

“A lot of the out of towners were due to university students,” OPP candidate Kevin Koo said. “We invited them, spread it through Facebook, and did not take more measures to keep the event local.”

“What happened is that we had out of towners and students,” OPP candidate Jenna Anderson said. “In order to prevent this, we need to promote a more safe environment and band together to make it safer.”

“Pointing fingers will never get us anywhere,” OPP candidate Casey Firenze said. “Creating a police advisory board is something that would help us so we can control the IV community properly.”

Voting for off-campus senators, as well as other AS positions and fees, will be held on GOLD from April 21 to 24.