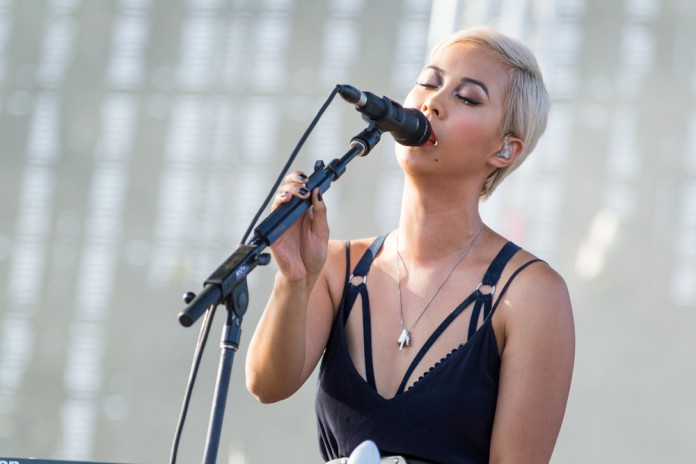 Day 3 was a blistering and unforgivably hot day. By this time my feet were swollen, body aching, and I fully accepted the fact that my hair was destined to end up in a ponytail. Luckily, the day had fewer conflicting acts than that of the previous day, so I even had the time to check out bands I never heard of–noteworthy ones being Blood Orange and Escort, two funky and soul-swinging bands who hail from New York. Overall, Coachella Valley Music and Arts Festival Weekend 2 was full of surprises–from Chance the Rapper canceling his set to Arcade Fire bringing out Daft Punk, or “Paft Dunk”–and the weekend wrapped up with jaw-dropping performances. I couldn’t pick just five, so here are the six of the best acts I saw: Performing at Mojave around noon, the Irish folk artist James Vincent McMorrow and his band delivered an impressive and tear-jerking set. For an earlier show, the tent still had a decent sized crowd, with half of the people crowded toward the front and the other half relaxing on the grass.

McMorrow was touring his sophomore album “Post Tropical,” a sorrow-ridden collection of songs that strays from purely organic sounds to the incorporation of electronic beats. McMorrow even donned flamingo and palm tree glasses at one point, similar to the images on the album cover, eliciting chuckles from the crowd when he said, “spring break forever.”

At this point, I was sitting on the ground by myself, but McMorrow’s despairing voice and powerful words made it seem appropriate to be alone. His passionate falsettos soared against the minimal instrumentals as he sang “Look Out,” “All Points,” “We Don’t Eat,” and the ever so impressive “Cavalier.” The music was so angelic that I eventually laid down to fully soak in the beating drum, raw lyrics, and desert heat.

McMorrow ended his performance with a piece of advice, saying, “Go see Little Dragon. It will blow your fucking mind.” Things picked up at Sahara with the nu-discotheque Australian DJs Hugo Gruzman and James Nathan, better known as Flight Facilities. I found it very amusing that Gruzman and Nathan were dressed like they were about to go flying, but as their clothing suggested, they took the crowd for a ride.

The duo’s upbeat electro-house set featured all of their singles and guest star performances. Grovenor came out to sing “With You,” and surprisingly, Flight Facilities had Brooke Addamo (of Owl Eyes) cover parts of songs, such as “I Didn’t Believe,” “Claire De Lune,” “Crave You,” and a pop-y, slowed down remix of Major Lazer’s “Get Free.”

Other remixes included Disclosure’s “When a Fire Starts to Burn,” Daft Punk’s “Doin’ It Right,” and “Pure Imagination” from the 1971 film “Willy Wonka.” The lyrics “Hold your breath / make a wish / count to three / come with me / and you’ll be / in a world of / pure imagination” gracefully transitioned into “Claire De Lune.” Luckily, the daytime disco continued at Mojave with electronic, nu-house duo Classixx, composed of Los Angeles natives Michael David and Tyler Blake. I was surprised to learn that Classixx performed live: they actually sang, played guitar, and brought out (a lot of) their friends to perform.

Of course, Classixx’s set included various remixes. Their remix of YACHT’s “Psychic City” was joined by Jona Bechtolt and Claire L. Evans themselves, and YACHT’s synchronized dancing and fabulous outfits were a show on their own. Superhumanoids’ Sarah Chernoff also joined Classixx for a cover of “A Stranger Love.”

Classixx played songs from their 2013 debut album “Hanging Gardens,” including “Holding On,” “I’ll Get You,” “Dominoes,” and “Borderline.” A mixture of hard hitting electro-house beats, indie rock melodies, and disco pop, their set was perfect to groove to on the summer like day. The only thing missing was a pool. The stage was a cloud of lingering smoke, and Little Dragon opened their set with the droning, yet dreamy dance number “Please Turn.” The Swedish indietronica band delivered a stellar performance, and singer Yukimi Nagano’s voice was even more alluring and ear-ringing in person.

The crowd got down to their hits “Twice,” “Ritual Union,” and “Little Man.” Nagano announced she would be debuting songs from their upcoming album, entitled “Nabuma Rubberband,” which featured afrocentric beats and a more soulful sound.

Beck is hands down one of the best performers I have ever seen. Although his set drew thousands upon thousands of people, his interaction with his fans made me feel like I was watching him at a far more intimate venue.

During his performance, he said that he had a short set so was not going to play stuff from his new album, saying, “We’ll save that for next time.” He knew what the crowd wanted, and more importantly, he knew how to give it them. Beck played a lot of his rock-heavy hits, including “E-Pro,” “Loser,” “Devil’s Haircut,” “Black Tambourine,” “Lost Cause,” “Where It’s At,” and a cover of Michael Jackson’s “Billie Jean.” His whole set was impressive and a delight to dance to, but his performance of  “Debra” was especially enjoyable, as his delivery was sexy and comical. I almost felt compelled to buy myself a Hyundai.

At one point, Beck brought out his harmonica and started jamming with his drummer, and in response, the crowd clapped to the beat of the kick drum. Upon noticing this, Beck asked the drummer to hold on, but the crowd had also stopped. Beck then asked the audience to give him a beat and eventually said to clap as fast as we could. We didn’t hold back and neither did he, and he made that harmonica whistle the blues at a speed only a musician of his caliber could execute.

Not only is he musically gifted and hilarious, but he is also considerate of his bandmates. Beck grabbed his microphone and the very long extension chord, which he gathered and put on his head at one point. He introduced each member and had them give a solo, and when he thought the player was holding back or could do better, he encouraged them to show off. Beck was the only performer I saw that weekend who gave every member more than their 15 minutes of fame.

Beck’s personal anecdotes were also inspiring. He recalled a time when he was invited to see a band at “this little bar,” where he had seen The Black Keys a year earlier. He talked about waiting outside the bar for about 45 minutes to an hour, soaking wet in the rain, but that he knew it would be worth it; he said there was something about the music coming through the walls. When he finally got in and was drying off, he said he heard this song, and while strumming his guitar, Beck started singing Arcade Fire’s “Rebellion (Lies).”

“Well they played it better than that,”said Beck, making the audience laugh. “So you never know…  That little bar down the street from your house, sometimes they have the best music. Don’t forget about that little bar.” And with that, the Beck and his band went into the forlorn “Blue Moon.”

Before playing “Sissy Neck,” Beck also talked about Coachella. He talked about how much it had changed since his first performance there in 1999, which is also the year the festival officially launched. He said that the first time they were there, Coachella had the same feeling and everything, with about 8,000 to 10,000 people.

“Paul, and everyone who was putting it on together, they were taking us around and talking about what the festival was eventually going to turn into, and to see it all here today–here it is,” said Beck, marveling at his view. “They took a real chance to doing this show.”

The last performance of the night, Arcade Fire was more than worth the 40-minute wait my friends and I exchanged for a great view. It was an unforgettable show full of wisdom, guitar-smashing, confetti, and soul-searching music.

Looming over the band, hexagonal mirrors rose and lowered through out the set, reflecting the backs of Arcade Fire. My friends and I were pretty close to the stage, and at times, I could even see the strings on lead singer Win Butler’s guitar.

Butler began the show by saying he had two guest to introduce, and when the beginning bass line of “Get Lucky” began, we all screamed so loudly that I didn’t hear Butler say “Paft Dunk.” We ran even closer to the stage than I thought was possible, and we were all jumping and hugging one another in joy, many with their phones out. Although purportedly a prank, this introduction was but a minuscule detail in a mind-blowing set.

Arcade Fire burst into “Normal Person” and played many tracks from their fourth studio album “Rekleftor,” including “Joan of Arc,” “Afterlife,” “Here Comes the Night Time,” and “Rekleftor.” The band also brought out Beck to cover Prince’s “Controversy.”

Before performing “The Suburbs,” Butler spoke to the crowd and talked about how we are “all becoming a monoculture” and that sometimes we need to remember to put our feet in the grass. I was singing this song at the top of my lungs, and hearing all the guys around me sing, “…I want a daughter while I’m still young. I wanna hold her hand and show her some beauty before this damage is done,” broke my heart.

Butler told the crowd that we needed to forgive ourselves for things, for example, for not getting into a certain school. Later, Butler also mentioned that those at Coachella are similar to the generation of Woodstock, saying that the former were hipsters of their time and that we are hipsters of our time–no matter how much we deny being hipsters. The difference, he remarks, is that the prior generation hated the Vietnam War and that ours needs to make changes, especially regarding gay rights.

With that, Butler said that the next song was about a boy telling his father that he was gay. Butler had us chant “we exist” multiple times at the top of our lungs, following this, Arcade Fire erupted into “We Exist.”

Wrapping up the night, Arcade Fire played “Wake Up.” By the time their set was up, we chanted for “one more song,” but due to a strict sound ordinance, the band wasn’t able to. Instead, like the prior weekend, the band got off the stage and walked through the crowd, along with the Preservation Hall Jazz Band, who had performed earlier in the afternoon at Mojave. As they walked up and down the aisles, we continued chanting the heart-stirring melody of “Wake Up” for about 10 minutes. When the festival officially came to an end, I walked away with a renewed sense of inner peace.