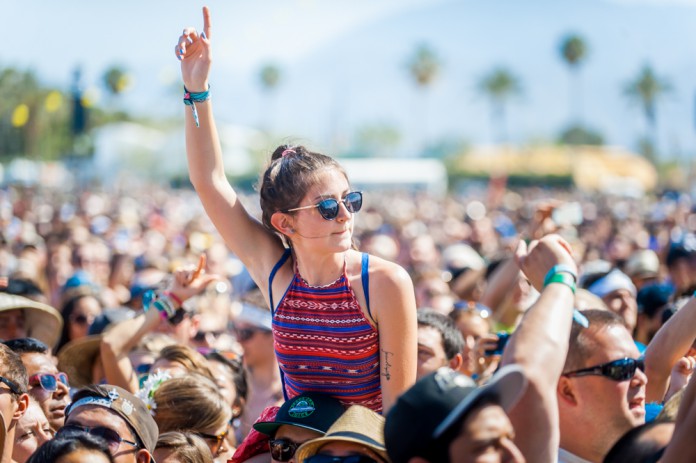 The sun was out and about early Saturday morning, and it woke my whole tent up by 8 a.m. But somehow, in my unconscious state, I decided that two more hours of sleep in a sauna with little oxygen was worth it. Thus my day started off slow, with Cup-of-Noodles for breakfast and a two hour wait for a much-needed shower. Luckily, the sunny day came with a moderately cool breeze, and the Empire Polo Club was a bright, sun-drenched playground. Around 3:20 p.m., I arrived to an ear-deafening, electrifying cacophony of sound and energy at the Coachella Stage. Cage the Elephant’s frontman Matt Shultz greeted the crowd, saying, “Good morning. That’s right, Coachella morning is at three.” Shultz flashed a smirk, laughing at his own joke, and then said, “Whatever.” With that, the alternative and garage rock band helped start my day with a bit of punk, jumping right into their 2008 hit single “In One Ear.”

One of the most entertaining parts of this act was watching and listening to Shultz, who kept saying “good morning” in between songs. He utilized the stage space to jump around ballistically–when he was on it at all. But it wasn’t only Shultz who rocked out; the whole band was a fury of talent and a ruckus of noise.

At one point, Shultz addressed the pineapples on the stage, telling the audience, “You guys shouldn’t have. How did you know pineapple was my favorite?” Shultz held up the pineapple and said he felt like Tom Hanks; that the pineapple was his Wilson. Eventually, Wilson and Shultz went crowd surfing together. I checked out a couple memorable artists, such as Banks, Holy Ghost, CHVRCHES, and Julian Casablancas, but nothing stirred my soul the way Washed Out did. The synth-heavy, electropop, and chillwave sounds of Ernest Greene and his band were like a hazy dream –a nostalgic experience that took me back to the lazy, early days of high school spent in my room or driving to the beach.

Washed Out performed songs from early and recent singles, EPs, and albums, including “New Theory,” “Eyes Be Closed,” “Get Up,” “All I Know,” Amor Fati,” “Paracosm,” and “Feel It All Around.”

Greene tossed his sweaty, curly locks back, and kept a steady beat with a shaker in one hand and the other on the synthesizer and keyboard. Greene and his band’s ambient instrumentals and harmonization were absolutely soothing and beautiful.

Later, to my surprise and contentment, Greene strapped on an acoustic, electric guitar and performed a cover of Pixies’ “Where is my Mind?” and a mellow rendition of Weezer’s “The Sweater Song.” My friend and I skipped and frolicked to the main stage just as MGMT was performing “Kids.” We made our way behind the sound check area, where a dance party had started to accumulate. It didn’t matter that we could only see flashes of color from the graphics on the screen. This area may not have had a view, but it had the best sound, as it was right behind the sound stage.

There was a full-fledged dance party by the time they performed “Time to Pretend,” but fewer people danced to songs from their third album, such as “Flash Delirium” and “Your Life is a Lie.” When the classic guitar melody, bass line, and synth chords of “Electric Feel” began, I could see people running toward the Coachella Stage from other tents, and as the sun began to set, the crowd grooved to a psychedelic, extended version of MGMT’s 2008 single. The experimental, ambient, and down-tempo collaboration of electronic artists Nicolas Jaar and Dave Harrington was an unforgettable performance. Although I honestly wanted to see Pharrell perform his older R&B and N.E.R.D hits, going to the Gobi instead was one of the best decisions of my life.

Jaar and Harrington were onstage with their instruments and bodies facing each other, with only a circular, moon-like screen in the background. The college buddies began their set with a tease, drawing out obscure sounds and ever-so-slowly layering danceable beats. The deep bass came in waves, and Jaar’s haunting vocals and Harrington’s instrumental prowess created a mesmerizing medley of sound.

From the first time my friend showed me Nicholas Jaar to the other day, when I caught his DJ set at Yuma, I was hooked. But watching Harrington and Jaar perform as a band was another level all together, for the music was no longer an aural void but a tangible sound. DARKSIDE performed songs from their 2013 debut album “Psychic,” such as “Golden Arrow” and “Paper Trails.” Still relaxed and in a trance-like state, I wanted to venture off to the Do Lab to see ODESZA, a melodic, ambient, experimental electronic duo from Seattle. Created by Harrison Mills and Clayton Knight only two years ago, ODESZA performed songs from their 2012 studio album “Summer’s Gone,” their 2013 EP “My Friends Never Die,” as well as new, unreleased material.

ODESZA’s light, down-tempo beats have relatively simple build ups, drops, and melodies, making the music easy to get lost in. Unlike the deep tones of DARKSIDE, their sound is uplifting and dreamy, and the tracks usually feature high pitched vocal samples and piano.

Eventually, ODESZA revealed that they wanted to share some of their new music with us, saying that it was “shit we don’t play usually, so I hope you dig it.” The new tracks flirted with glitch hop, but still retained that soul-soothing pop tune.

Water was misted onto the dancers, and even when the dirt floor got muddy, people didn’t stop dancing to the ethereal tunes, at least not until ODESZA’s set and Coachella Day 2 officially came to an end.